A Review of "The Way Out" by Edward A. Filene 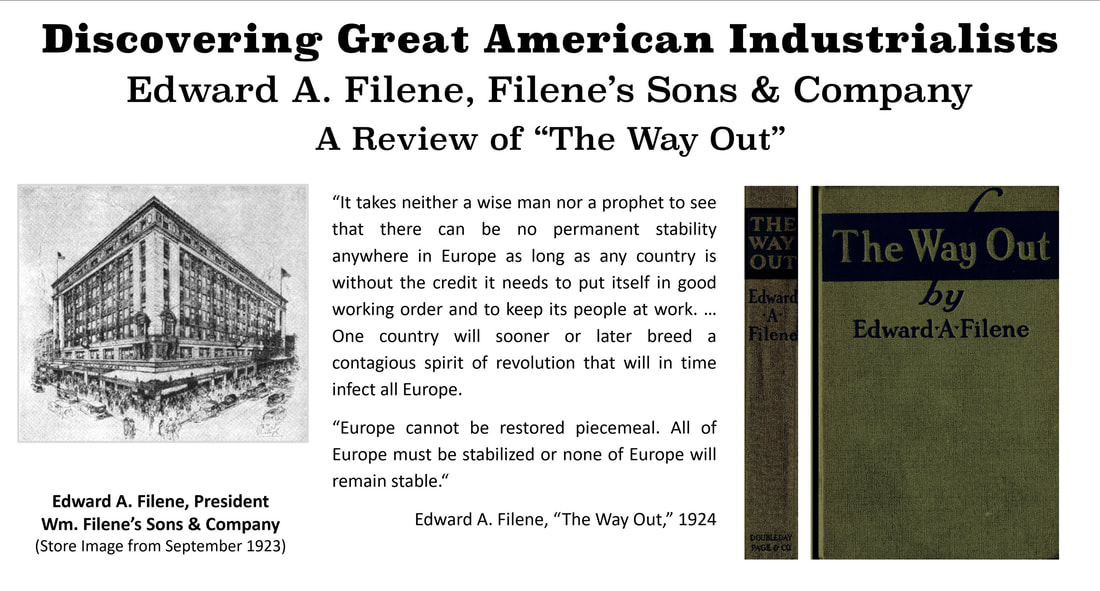 ​A Review of “The Way Out” by Edward A. Filene
Reviews of the Day: 1924–25
​“Edward A. Filene presents a forecast of coming changes in American business and industry. … ‘The Way Out’ impresses one as unusually suggestive, inspiring, clear-visioned, and farsighted. One may not agree with all that Mr. Filene says, but at least he makes the reader do a lot of thinking.”
Barrett Mann, “Reviews of the Latest Books,” The Pittsburgh Press, December 21, 1924​
​“The economic freedom Mr. Filene foresees will ultimately eliminate social and industrial unrest. …Which might give the impression that Mr. Filene’s book is theoretical—the work of a dreamer. It is not.

“It is reasonable, and logical, and convincing—and incidentally, it is pleasingly readable.”
“Book Review,” The Emporia Gazette, April 1, 1925
Selected Quotes and Insights from “The Way Out”​
“Over and over again I have found that when men begin to concern themselves with social justice in their businesses, they are tempted to use their good intentions as an alibi for business shortcomings. Social progress does not lie that way, and certainly business success does not. . . .

​"We must realize that a good ethical sense is no excuse for a bad business sense. … Social progress is not helped by the business man who carelessly introduces all sorts of progressive social policies into his business and then ends up in the bankruptcy court.”
​​ This Author’s Thoughts on “The Way Out” by Edward A. Filene
I picked up this book after reading Mr. Filene’s Successful Living in this Machine Age. This book, like Successful Living, was a most-satisfying read written by the famous retailer, and both are highly recommended by this author.

​Although the book is an extraordinarily strong read from the first page to the last, the most insightful chapters were: “Captains of Industry vs. Captains of Finance,” “Democracy and Success in Business,” “Fordizing American,” “Counterfeit Wages,” and “Turning to Mass Production.”

The following offers a few insights from several of these chapters.

​“Heretofore, the one big question about political democracy has been: How can we get it? How can we provide universal suffrage? How can we extend suffrage—the right to vote, so that everyone has a voice in governmental affairs [a quantitative problem]?
​
“But now that the right to vote has been made universal, the big question about political democracy is: What are we going to do with it [a qualitative issue]?”

Isn’t this the case today? In too many cases, aren’t we trying to right the quantitative democratic shortcomings of the past with qualitatively misguided re-actions in the present? His insights reach beyond just the business social community into the political as well. He writes of the twentieth century’s initial experimentations in industrial democracy: “I have seen the mass of workmen in a fairly democratized business insist upon going back and making all the mistakes that their leaders had made when they were younger.”

One of the strongest moments in the book is when Mr. Filene proposes his definition of “industrial democracy.” He observes that, “The first thing that impressed me in reading the results of research was the utter lack of any common understanding or common agreement upon the meaning of the term ‘industrial democracy.’ ”
​
He then provides his definition that the reader may find interesting:

“In short, it seems to mean anything from benevolent paternalism upon the part of employers to sweeping usurpation upon the part of employees. …
​
“When I use the term ‘industrial democracy,’ I mean that form of industrial organization in which the employees have (1) an adequate voice in the determination and control of the conditions of work, (2) an adequate stake in the results of work, and as near as humanly possible (3) a guaranty that the management of the business shall be efficient.”

Reading this chapter, I understood why Filene and Watson Sr. were such kindred spirits in organizations like the International Chamber of Commerce that they both attended, supported and lead. To read about Thomas J. Watson Sr.’s definition of “Democracy in Business” read this author’s article on the subject as provided here: [Democracy in Business].
It was humbling, but it was also encouraging to find verification of this author’s twenty-first-century article and statement of belief in such a successful, well-respected, twentieth-century industrialist leader.

“So, I am going ahead with this consideration of a Fordized America simply because Mr. Ford has given us the finest demonstration to date of those principles of mass production and mass distribution. …

​Only remember that it is Ford the producer and not Ford the publicist or politician who is meant.”

There is so much wisdom, truth and understanding in Mr. Filene’s statement, “It is one of the obligations of the intelligent to refuse to allow the minor errors of a man’s career to overshadow his real contribution to the life of his time.” This is a truly magnanimous observation! I wasn’t surprised that no review that I found mentioned this chapter—or used the term “Fordizing America.” It was a very touchy subject at the time.

Now, if our current leaders would study business history, and university professors could dependably teach these business principles with a contagious passion, the next generation might not repeat this mistake—that has already been repeated twice.

Our predecessors had broad shoulders. …

We should stand on them. …