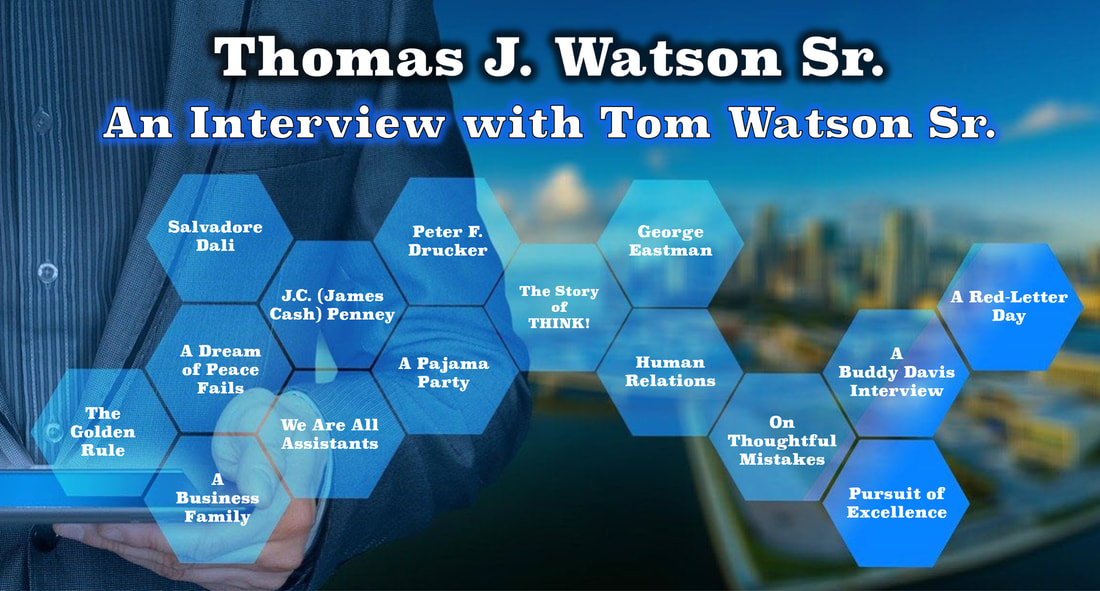 Who Was Horance G. "Buddy" Davis
Horance G. "Buddy" Davis was a Pulitzer Prize winning renowned journalist. Mr. Davis graduated from the University of Florida with a bachelor's degree in 1948. He received a master's degree in 1952. He then went to work for the Gainesville and Tallahassee bureaus of the Florida Times-Union before joining the faculty at University of Florida.

Mr. Davis won the Pulitzer Prize in 1971 for a series of editorials that called for tolerance during the civil rights era. In 1983, he left his position as editor and started writing a regular column for the opinion page, becoming syndicated throughout the thirty-five New York Times regional newspapers. H. G. Davis passed away in 2004.

​This is how he remembers his first encounter with Thomas J. Watson Sr. in the 1950's.

His only question at the time was, "Tom who?"
So I hastened to the library. I learned that Thomas J. Watson was a firmly entrenched capitalist, which meant wealthy, which meant right-wing and anti-government. Anticipating a tirade against taxes, government regulation, the communist menace and those damned liberals, I could have written up the interview the night before.
That would have been a mistake. Over the eggs, Thomas J. Watson turned out to be a Roosevelt Democrat. He told me that he loved the government and never minded paying taxes because he owed that much to a nation which had done so much for him. He did not want to live in a land of the poor, and he did not mind paying the price.

Tom Watson was an Ohio farm boy who became a master salesman for a company which manufactured cash registers. As he climbed the management ladder, his boss involved him in a monopoly scheme which darned near landed them both In the slammer in 1912. Shaken but undaunted, Watson took over management of a sagging Ohio company which marketed meat slicers, weight scales and adding machines.

The firm's name was Computer-Tabulating-Recording Company, and Tom Watson's exuberant sales techniques made it zing. In the early days, his contract awarded him 5 percent of the profits. After business got real good, he told me, he voluntarily reduced his share to a half percent. And no wonder, because there's a limit to what a mortal can spend. In 1924, the year I was born, the company was renamed as International Business Machines.

IBM, the very top of the heap of the nation's industrial empires!

My breakfast interview with Tom Watson took place in the early 1950s, just about when IBM management was turned over to his son. The senior Watson was to die in 1956 at the age of 82. I am indebted to him. Our encounter taught me not to stereotype the rich as piggish, non-caring slobs despite the news items from Palm Beach.

When anybody preaches unregulated big-time capitalism, I start counting the spoons. ... Only Thomas J. Watsons proved the system has merit.
Return to the Thomas J. Watson Sr. History Home Page