Review of B. C. Forbes' "Automotive Giants of America" 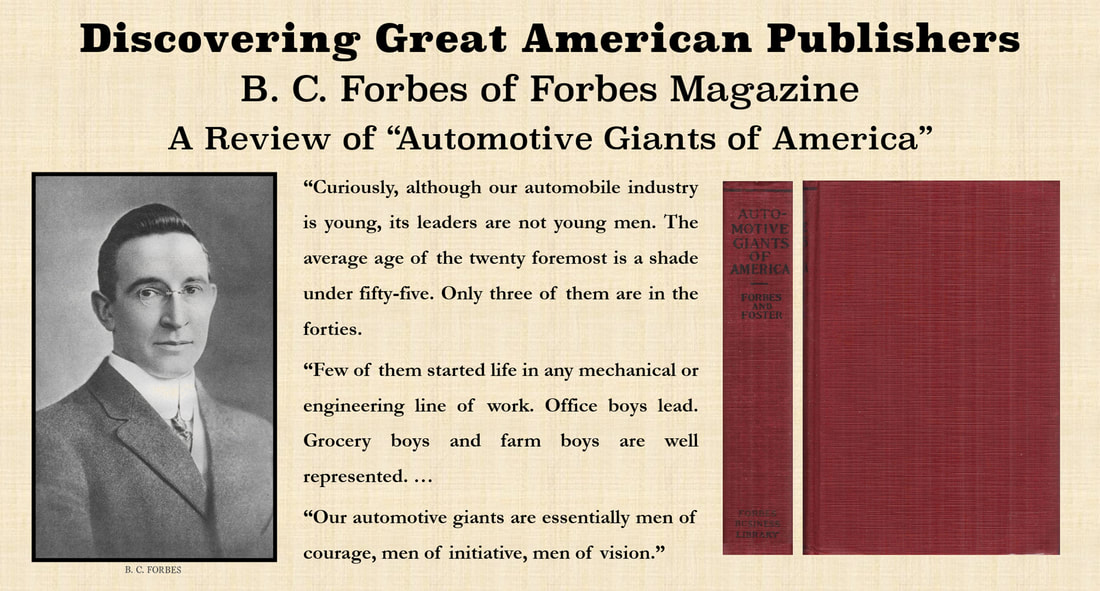 In 1926, B. C. Forbes published the Automotive Giants of America. This was only five years after the disastrous post-war Recession of 1920–21 which wreaked havoc on the automobile industry. He quotes a few statistics that documented that the industry had regained its footing and was a force in the growth of the United States.

The American automotive industry’s business record in 1925 was as follows:
​​These were giant executives within a giant industry.
​A Review of "Automotive Giants of America" by B. C. Forbes
Reviews of the Day: 1926
The Philadelphia Inquirer, August 21, 1926
Here is a list of the individuals covered in this book.
The Backgrounds of the Automotive Industrialists in this Book​​ 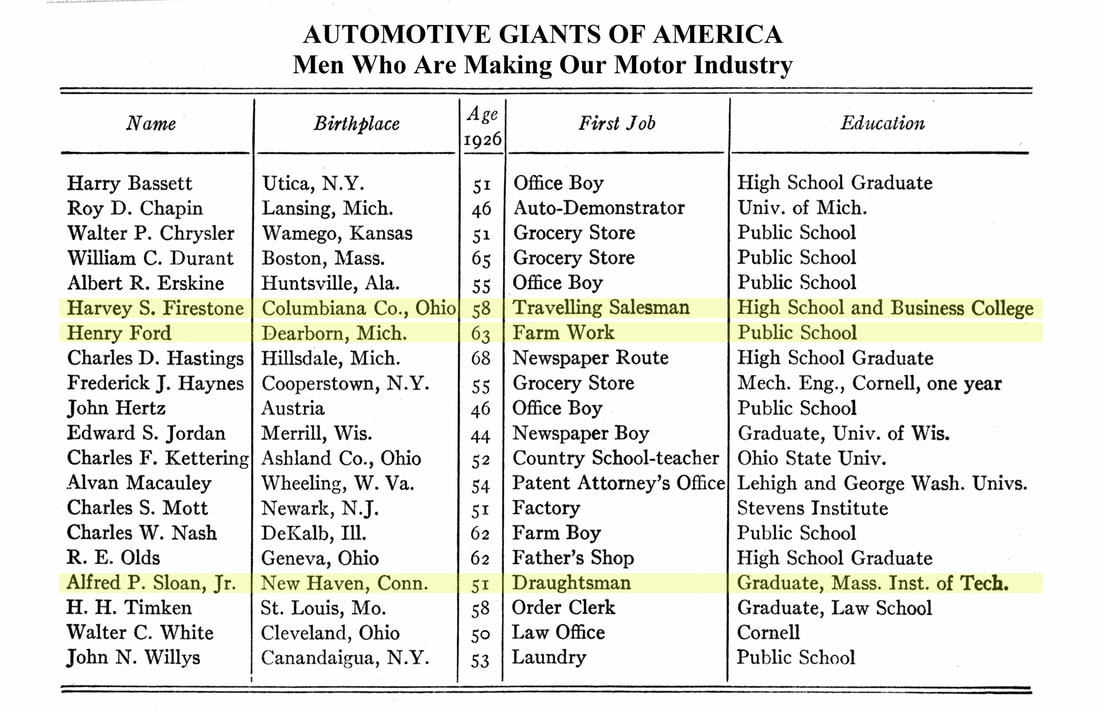 [Information and other book reviews concerning the industrialist’s highlighted in yellow above are available at the following links: Harvey S. Firestone, Henry Ford and Alfred P. Sloan, Jr.]
The best way to value the information in this book is to publish the quotes of a few of the individuals from the above list. Here are some of their thoughts.
Selected Quotes from B.C. Forbes’ Interviews​​
Firestone Tire Company: Harvey S. Firestone’s Business Philosophy
The Buick Company: Walter P. Chrysler’s Business Philosophy
Mr. Chrysler made the Buick one of the most talked-about cars in the automobile industry [and later—after the publication of this book—the Chrysler]. In the space of eight years, he raised the production of the Buick from forty a day to 600 a day. Here is his executive philosophy:
The Studebaker Corporation: Albert R. Erskine’s Business Philosophy
​He also discussed the “first duty of an employer” and the relationship of capital and management with labor:

“The first duty of an employer is to labor. … It is the duty of capital and management to compensate liberally, paying at least the current wage and probably a little more, and to give workers decent and healthful surroundings and treat them with the utmost consideration. If management cannot do this, then something is wrong. …

“In 1915 we put into effect a bonus plan, benefiting some four hundred men and women, from foremen up – every person having authority to manage employees or property, the tellers. …
​
“In March, 1917, we inaugurated dividends on wages. … We began giving every worker one week’s vacation after two years’ service. We give them their pay before starting [their vacations] so that they may have something to enjoy themselves with.”

There is so much more in this book. So much more that many of our 21st Century Chief Executive Officers should evaluate. It isn’t the ephemeral “what” these automotive industrialists did that is important but the timeless “why” they did it.
​
The principles behind their “whys” should be read, reviewed, recognized, and restored to prominence.
This Author's Thoughts on "Automotive Giants of America"
As with other B. C. Forbes’ works, the amazing part of this book is the access that he and Mr. Foster had to the leading industrialists of their day. These industrialists shared their personal stories, their work ethic, their beliefs and desires. They trusted the authors to get it right … to find the balance. They even gave them access to their employees to verify their stories of leadership.
​
Who is the 21st Century’s editorial equivalent to B. C. Forbes? Who has the credibility as a magazine editor to get audiences with the top businessmen and -women of today: Jeff Bezos, Mary Barra, Elon Musk, Abigail Johnson, Mark Zuckerberg, Carol Tomé, Warren Buffett, Meg Whitman, Bill Gates, Larry Ellison … and ten more besides? Doesn’t society need a journalist/editor who can and will study the respected business leaders to validate their leadership stories and then broadcast them for the profit of others? Doesn’t society need a fourth estate—a business press—that prefers face-to-face, executive/employee interviews to social-media driven, employee surveys that are all too superficial—and multiple choice?
Return to the B. C. FOrbes Bibliography Home Page