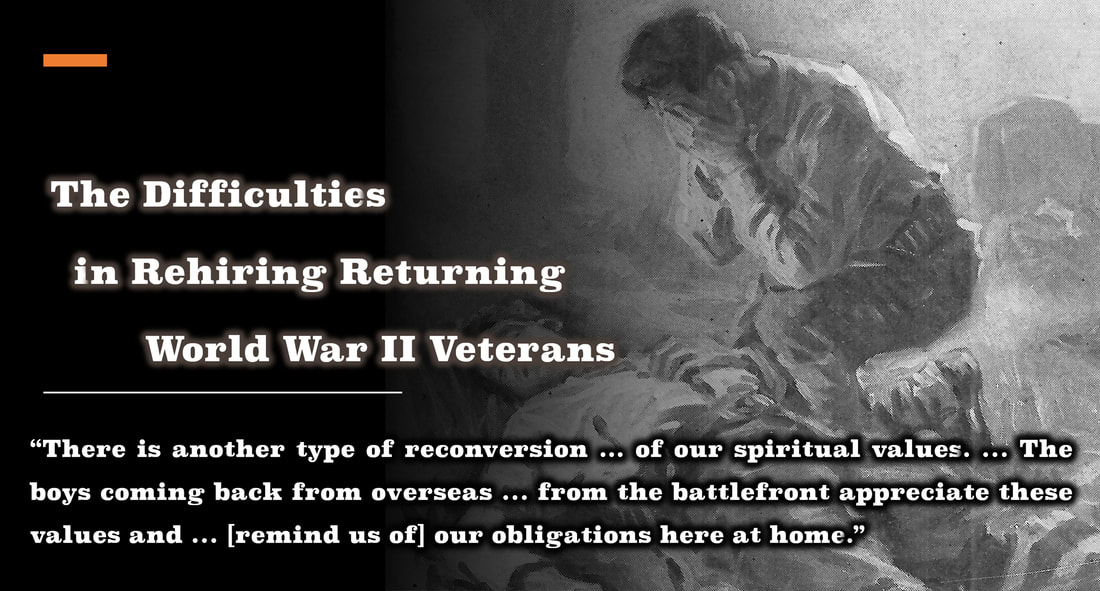 “We have an obligation to our men and women overseas—nearly 5,000 in number—who have all been guaranteed jobs when they come home from the service of their country.”
​Thomas J. Watson Sr., IBM Systems Service Classes, Endicott, April 9, 1945
​ An Easily-Said “Guarantee” That Was Hard to Accomplish
Tom Watson Understood Employment Issues Better than Most
"We will have to provide full employment for all, regardless of race, creed, color, or station in life. That is a big reconversion problem, and we are all taking it more seriously today than ever before.”

This article is intended to highlight a few of the factors that made it difficult for the chief executive to fulfill his “guarantee” of jobs to “all” returning veterans. It was difficult because he felt an ethical—not a legal—obligation to his returning servicemen.

Despite the obstacles the corporation kept its promise.
George W. Tetherly Asks the Hard Questions in 1944​​​
George W. Tetherly was The Binghamton Press newspaper staff writer who covered the local businesses in the tri-cities area. In 1944 he wondered if there would be enough jobs to provide full employment once the war ended. His research produced a remarkable piece of reporting.

Mr. Tetherly started his three-article series with one statistic that was quite concerning. In the tri-cities area there were approximately 40,000 workers employed in essential industries—industries that were critical to the war effort. Because of this, it was easily estimated that when the war ended over 70% to 80% of these jobs were at risk just as an additional 20,000 servicemen and -women returned from overseas expecting their old positions back. He wrote that the first demand of these individuals will be for “a real job, followed by a home, and security for themselves and their loved ones.” [See Footnote #1]

After World War II ends, IBM starts building homes in Endicott to be sold "at cost" to is returning IBM Veterans.
If just this ability to provide an “additional” job for one out of every two currently employed wasn’t concerning enough, the following insights offer a glimpse at the issues surrounding the return of the veterans.

This topic was covered in George W. Tetherly’s second article as he summarizes the policies of the leading Triple Cities industrialists. Because this was a general policy of many businesses and because of the sensitivity of the issue, the writer posted his findings anonymously; but it is easy to discern that the following either came directly from Watson Sr. or possibly through Charles A Kirk, IBM’s resident manager.
“Most certainly it is my opinion that the industrial policy of the future should be to protect the family as a unit, and in pursuing such a policy I feel that it is the obligation of industry to see to it that there is at least one fully qualified wage earner in every family unit earning a sufficient amount of money to maintain the family on a good standard of living [emphasis added].”

It is not hard for this author to read this statement and assign it directly to Tom Watson. Charles A. Kirk elaborated on the implementation of IBM’s employment policy at the end of the war. Note the usage of the word “duration” and the policy as it existed from this press interview excerpt:

"The 300 persons who may be laid off, Mr. Kirk declared, are 'duration employees' who signed agreements that they were being hired for the “duration of the war” only. They are mostly women whose husbands are gainfully employed [See Footnote #5].
With the war ending, these policies were implemented as agreed.
This Author’s Thoughts and Perceptions
Tom Watson up to this time had weathered seven economic recessions which included the Recession of 1920–21 and the Great Depression. Only one of these seven economic downturns was less than twelve months and, unbeknownst to him, there were two more recessions coming before the end of the decade--short ones of less than 12 months each. Although he spoke optimistically, he acted with a very high degree of business prudence. The Recession of 1920–21 was the hallmark of the post-World War I era. He felt he had failed his employees during this time, and he was determined to never repeat this mistake.

First, he needed to fulfil his obligations to his employees and to his returning veterans. To him this meant his corporation provided for each family unit within the IBM family. It was a policy that kept employment stable and overall, unemployment lower in the tri-cities area. His caution is understandable especially in guaranteeing full, stable employment to married women at a time when one-income families were the norm, and the corporation was one of those businesses that provided a single income that not only put food on the table but shelter over a family’s head, ensured employment security, provided health and disability insurance, widows and orphans’ benefits, retirement, and education.
Tom Watson wasn’t perfect, but his decisions in this environment are understandable given context of the day. Like everyone he had human failings, but he kept moving forward—surely not fast enough for many who look back from the present; but he kept his company, his industry, and his country moving ahead with him. It just took him a while longer to shake this one “bond of custom.”

One woman expressed her gratitude to the company during World War II for its “family approach.”

“We, too, are proud of our service man, and glad too that he was employed by a company [IBM] whose understanding and policies make it possible for him to do his duty with no worries about those at home. We came to IBM 10 years ago after being on government relief. Today we owe no bills. We have built and paid for our home, and my husband is free to do the work he feels will mean most to our country [serving in the military], knowing that I have a job with the company, and can keep things going at home. …

“This is what our opportunity to work at IBM means to us.”
A letter published in Business Machines, January 27, 1944
​After reading the gratefulness of one woman for the benefit of being employed by IBM during this time—her family was protected, maybe the reader will comprehend that there are two sides to this story both of which need to be understood.
​Cheers,

P.S. If you have further details or find additional information around this story, feel free to contact us. We encourage discussion and interaction, and we enjoy integrating new information as it becomes available. We are always grateful for the donation of pre-1957 IBM newspapers, documents, pamphlets or pictures. They assist greatly in producing factual articles such as this to ensure history remembers Tom Watson correctly.
Footnotes
Footnote #1: Russell C. McCarthy, a War Manpower Commission Director, estimated that the government planned to terminate $40 billion worth of V-J war contracts as soon as peace was declared.

Footnote #2: In addition, Tom Watson wrote the following in 1945 to his servicemen and -women, “If, because of a disability sustained in service, we feel it best for an employee to resume work only on a part-time basis, the employee nevertheless will receive his full regular pay less any disability benefits received from the government. … Any employee who has been disabled and is unable to return to work upon discharge from military service will … receive their full regular pay for a period up to six months, after which each case is considered individually.”

Footnote #3: From a Tom Watson letter dated February 8, 1945, “Upon your discharge from the Armed Forces we want those of you who have served outside the United States to take a leave of absence of two weeks, during which period you will receive your full regular pay at the rate in effect at the time you entered the Armed Forces. Those who have served within the borders of the United States will receive a leave of absence of one week with full regular pay.”

Footnote #4: On October 25, 1946, just a year after the end of World War II, Tom Watson stated in a nationwide telephone “hook-up” that “We have employed 1,259 veterans who were not connected with our company prior to the war.”

Footnote #5: It was announced that 525 “duration employees” were released a few days later.
Return to the Thomas J. Watson Sr. History Home Page