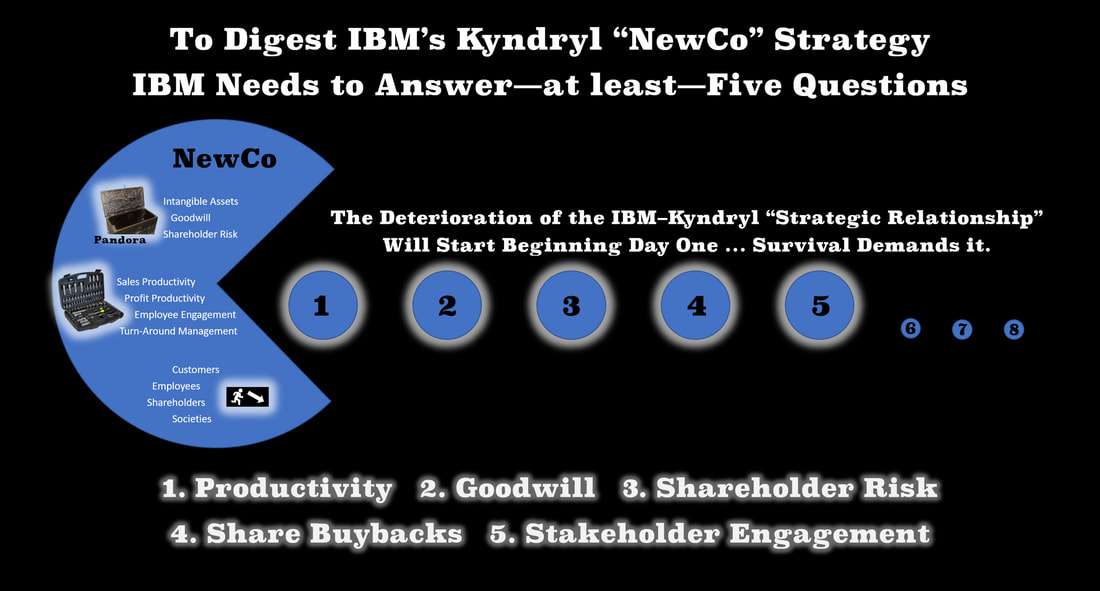 IBM announced its latest spin-off strategy with this statement: “IBM and NewCo will have a strong strategic relationship.” Such a synergy was hard to achieve even when both organizations were in one, unified corporate structure, guided by a common strategy, and overseen by a single top dog. In all deference to the marketing organization, these two corporations will immediately start the parting of their ways after the spin-off. Neither chief executive will tie their success to the other—except in press releases.

If these two organizations were unable to grow together—within today’s IBM, it is inconceivable that they will have a strong strategic relationship—once separated. IBM lacked leadership to turn-around any of the organizations it has divested over the last two decades. IBM has replaced most of its top-notch turn-around, executive leadership with jettison-now management. It will not find a strong strategic relationship now in two separate corporations.
​
IBM’s marketing presentation fails even the lightest of scratch-and-sniff tests.

There are innumerable devils in the spin-off details.

Let’s examine the top five.
The Top Five Questions for IBM and its Kyndryl (NewCo) Spin-Off
Declining Productivity and Productivity Competitiveness
The following charts document that IBM’s sales productivity has been dropping for two decades and is non-competitive. IBM’s profit productivity has been maintained not through normal productivity‑improvement practices but by (1) selling off assets: real-estate, pension and health benefit reductions, and divestitures, and (2) workforce rebalancing: replacing highly-engaged, highly-productive and therefore highly-paid employees with more numerous lower-paid, less-engaged and therefore less-productive employees. In 2013, IBM hit a profit-productivity brick wall because it has depended almost solely on financial engineering and aggressive bookkeeping tactics to generate higher earnings per share.

Although, the main driver of employee productivity is the individual, this is micro-level productivity. And, although, a corporation is not responsible for the individual’s work attitude, it does carry the responsibility of providing an environment that is conducive to and effective for productive work. The responsibility for macro- or corporate-level productivity resides with the corner office.
​
These charts document two decades of corporate-level, productivity ineffectiveness.
​Without sales and profit productivity numbers, and competitive information by industry, stakeholders will not know which organization has the best chance for growth or maybe even survival. Improved productivity is the key to building leading-edge products, maintaining employee benefits and employment security to retain the best-of-the-best people, and the best long-term indicator to ensure a balanced investment return between stock price appreciation and dividend payments.
A Two-Decade Accumulation of Goodwill
Goodwill is an intangible asset with no real book value. IBM writes in its annual reports: “The primary drivers … of … goodwill are the value of synergies between the acquired entities … the acquired workforce … and IBM.” IBM still carries such “synergies” on its books from most of its 192+ acquisitions going back as far as 2001—twenty years ago. How will IBM account for this goodwill?
​Either before or after this “spin off,” there is a growing probability that a goodwill impairment must be taken. If the impairment is not taken before the spin-off, how will the intangible assets be distributed? ​Who will carry the most exposure to future impairments: Arvind or Martin?

Which naturally leads to the question: Which organization is going to carry the shareholder risk?
Growing Shareholder Risk
​Twenty-first century shareholder risk is closely related to the growth of goodwill and intangible assets. If either of these two corporations should need tangible assets—like Louis V. Gerstner used real estate assets in 1993–95 for cash flow and share repurchase purposes, these "intangible" assets will be of little or no value.

​In case of a business failure, the shareholders will receive little to no "tangible" protection from such assets.
​From a tangible asset perspective, IBM is already in poor shape to withstand a long-term economic downturn. An inequitable division of tangible and intangible assets between the two corporations will concentrate risk for shareholders in one of these organizations.
​
It seems shareholder risk transparency is demanded.
Share Buyback and Dollar-Cost-Averaging Buyback Failures
Unfortunately, share buybacks have been unsuccessful for IBM shareholders in all three instances: Share Buybacks from 1978–79, Share Buybacks from 1986–1998, and Dollar-Cost-Averaging Share Buybacks from 1999–2019. ​IBM’s historical record proves that its chief executives have never been smart enough to know when or how to conduct stock buybacks: intermittently or continuously. When compared with a large-company stock index, IBM’s three separate attempts at share buybacks have always underperformed.

​The share buybacks of the last two decades have accomplish only two things: (1) they cloak the diluting effect on shareholder value of shares issued for executive compensation, and (2) they deprive society of the wealth creation that comes from investing in people, processes, and products instead of in paper.
Maybe chief executives aren’t as “aloof” as they should be?
​All stakeholders need to know.
Stakeholder Engagement
Normally this topic would be "employee" engagement, but IBM if it is to get its 20th Century mojo back, it needs to focus on all its stakeholders to get them re-engaged.
Shareholders are concerned when a corporation puts its poor performance for them on page 141 of a 143 page annual report, and the chief executive officers' “Letter to Investors” says nothing about their (Rometty's and Krishna's) miserable stock performance. Board of Directors, where is the accountability in this: both the IBM 2019 Annual Report the IBM 2020 Annual Report were exactly 143 pages long and in both cases the bad news was shared on page 141.

Do IBM’s directors even read the annual reports?
True to its determination to remain opaque on this matter, the last time IBM published any employee engagement numbers was in this 2010 report—over a decade ago.
​IBM fell behind in the cloud because its chief executives failed to understand the power of a dedicated employee standing in front of a loyal customer discussing the best products as an economy returned to life. ​Instead it invested in paper—share buybacks, and it has been playing catch-up with its customers ever since.

It is on the company and its executive team to release information prior to the spin off. As the chief executive keeps saying, “It is a matter of trust and transparency.” It will be a long road back for IBM to regain its customers’ trust and with it, discover revenue growth.
​
Transparency with shareholder returns, employee engagement, and customer satisfaction would be a great way to start building “new” trust relationships.
IBM executives are promising almost non-stop to hire individuals in the United States. Yet, unlike its competitors such as Microsoft, Oracle, Cisco, Dell, and HP, IBM does not publish U.S. employment numbers. ​The last IBM U.S. employment numbers appeared in its 2008 annual report. Admirably,  even an Indian multinational corporation, Wipro, publishes its U.S. employment numbers. Unfortunately, there is no way to verify if IBM will live up to its promises such as Rometty's promise in 2016 to hire 25,000 professionals. Were these "additional" hires, or fire and hires? Trust us? An old Reagan euphemism comes to mind: trust but verify.

IBM has proven itself untrustworthy because of its lack of transparency. Its current leadership would rather look back fifty years for “an” issue than acknowledge its on-going, current, blatant discriminatory hiring practices. This is using a worthy goal of increasing diversity as cover for its decades-long, ethically-questionably actions which were driven by earnings-per-share targets: the Roadmaps of 2010 and 2015. Such discrepancies between words and deeds give rise to societal mistrust and disillusionment, not trust.

The societies that usually work in cooperation with trustworthy and transparent corporations should consider dropping their incentives until IBM does a “Mea Culpa!” on its current hiring and firing tactics such as workforce rebalancing, acknowledges its recent 20th Century history of age discrimination, and becomes significantly more transparent in its annual reports so that its promises are audited and verifiable by third parties.
Most likely Martin Schroeter will build an IBM Klone at Kyndryl. It is hard to tell who would want to work in this "New Company" other than executives with golden parachutes or executives with short-term manageable targets: Capitalist-minded CEOs not Industrialist-minded CEOs.

Even though it hurts to read—and write—these facts, keep laughing and maintain a sense of humor.