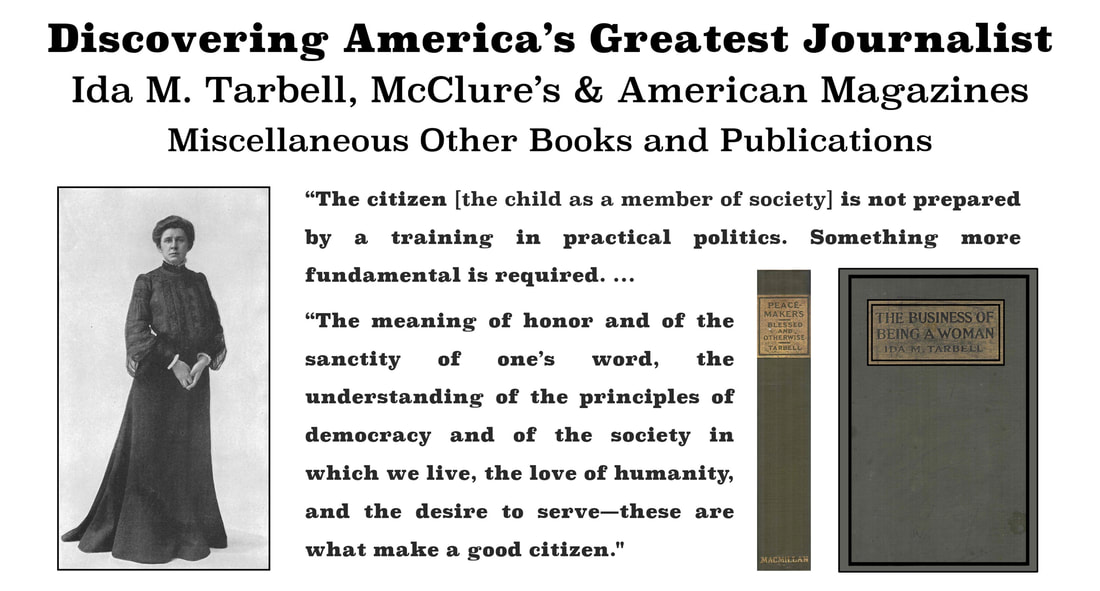 Ida M. Tarbell's Miscellaneous Books and Publications
A History of American Life: The Nationalizing of Business 1878-1898
The reader should not, of course, stop at Miss Tarbell’s account, compressed as it is into less than three hundred pages. … No more than a summary of the facts.”
​“Capitalism in American,” by William Gilmore
The Brooklyn Daily Eagle, November 29, 1936
Selected Observations of Ida M. Tarbell's from A History of American Life
I  was once again impressed by Ida M. Tarbell’s’ balanced approach to history and her description of the actors who interacted—and sometimes fought—with each other. She covers the individuals with Emerson’s Lengthening Shadow who led capital, business and labor during this time.
​
In order to impress this balance on the reader, I captured some of her comments from the book.
Writing on the impact of business consolidation
“The chief complaint against this [economic] system was that its leaders had taken too big a share of the profits for themselves. The country was prone to forget the benefits it had derived. It complained of the cost of telegraphing but failed to remember that in twenty years the number of offices had increased from eight thousand to more than twenty-two, thus giving hundreds of thousands more men and women the advantage of quick communication.
​
“Moreover, the service was cheaper, the average charge per message having fallen from 38.9 cents in 1878 to 30.1 in 1898.”
This Author’s Thoughts on A History of American Life: Volume IX
After reading a few chapters, the method I employed in reading this book was to first flip to the end of each chapter and read the last few paragraphs—Miss Tarbell’s summarization of each. Following this methodology, the chapters I found most interesting were the following: The Farmers Organize, Efforts for Industrial Peace, The Coming of the Panic of 1893, After Twenty Years, and Critical Essay on Authorities (actually referred to today as Acknowledgements). The Consolidation of Labor also deserves a mention.

The Nationalizing of Business 1878–1898: Volume IX is on par with Mark Sullivan’s Our Times. Mr. Sullivan’s series of six volumes focuses on the opening twenty-five years of the 20th Century, where this series takes a more expansive look at American life from 1492 through, initially, 1928—Volume XII, which was then extended through 1941 and The Great Depression with Volume XIII.
Then, we as citizens need to take advantage of it and educate ourselves.

- Pete
"Peacemakers: Blessed and Otherwise"
This is another amazing book full of insights into human interactions when we deal with large conferences to better mankind's lot in life - most of which is still true today.
"The Business of Being a Woman"
"Recollections of the Civil War"
He then goes on to describe Seward, Stanton, Chase, Welles, Blair and Bates. It was an amazing collection of men and egos that probably only a personality like Lincoln could have turned to an excellent purpose.

The good news is that the second time I "read this book" I will only be reading one chapter.
"Madame Roland: A Biographical Study"
"A Short Life of Napoleon Bonaparte"
Return to the ida Tarbell Home Page