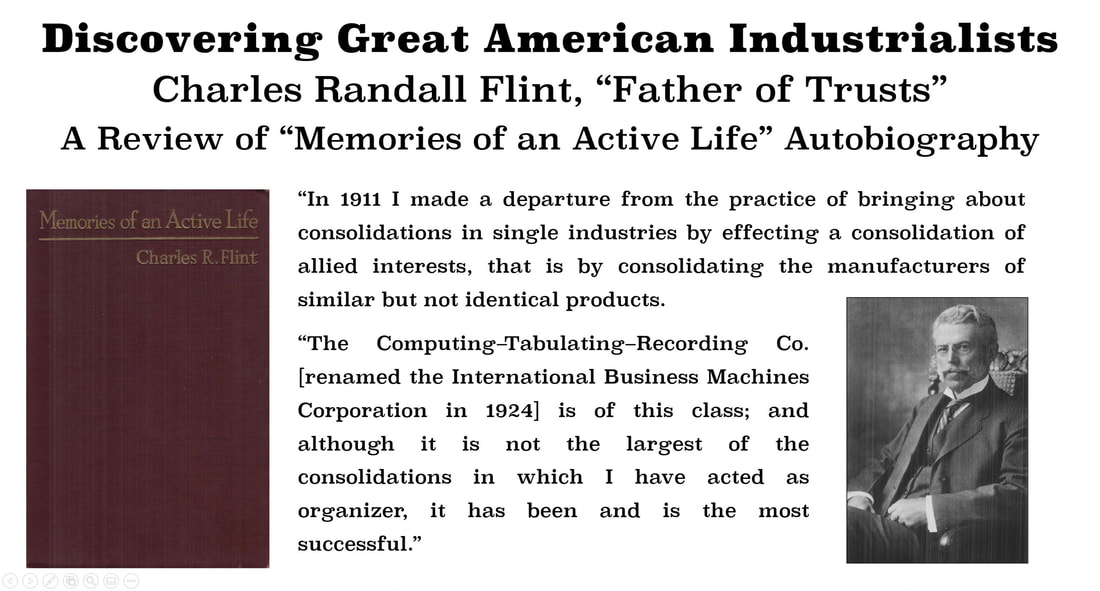 Memories of an Active Life by Charles (Chas) R. Flint is his 1923 autobiography.

​Mr. Flint was quite a character and would be called today by many other names besides the father of trusts: entrepreneur, speculator, mercenary, opportunist, arms dealer and more. In this book you find that he thought very highly of himself. He put together one of his most successful trusts—​the C-T-R Corporation—yet had to hire an individual from the outside to save the acquisition when it wasn't working as designed.

He is fortunate to have chosen Thomas J. Watson Sr., who, at forty years of age, started an iconic, four-decade-plus journey with the company while newly married with his first child on the way.
​A Review of "Memories of an Active Life" by Charles R. (Randall) Flint
Reviews of the Day: 1923
Editors note: From reviewing the papers of the day, this book appears to have been highly advertised but little reviewed when compared to the number of independent reviews of the biography of George Eastman when it was released six years later.
Selected Quotes from "Memories of an Active Life"
On the Building of Trusts
"A combination of labor is a trades union, a combination of intelligence a university, a combination of money a bank—a  combination of labor, intelligence and money is an industrial consolidation—Work, Brains, and Money."
Editor's note: This excerpt and the speech he started it with earned him the title "Father of Trusts."
C-T-R Company Was an Experiment
"The proposed 'allied consolidation,' instead of being dependent for earnings upon a single industry, would own three  separate and distinct lines of business, so that in normal times the interest and sinking funds on its bonds could be earned by any one of these independent lines, while in abnormal times the consolidation would have three chances instead of one to meet its obligations and pay dividends."
The One Major Downside of the C-T-R Company "Trust"
"All the advantages of industrial consolidation which I have enumerated are secured by an allied consolidation, except that a centralization of the sales department cannot always be effected to the same extent as in the case of consolidated  companies that manufacture a single product."
Editor's note: This was a long-term problem at IBM. Tom Watson suffered with cross-training individuals calling on small mom-and-pop retail businesses to sell meat slicers and candy scales, individuals selling time clocks to schools and cities, and tabulating-machine salesmen selling to railroads, insurance and banks. At times, he was encouraged when individuals from the three different organizations would share possible contacts and leads.
On Rendering "Services" for Payment
Monarchies are somewhat shy on sonorous phrasings of the principles of liberty and justice and all that, but they do pay their bills rather well; republics, on the other hand, like many eminent philosophers, have a distaste for such sordid affairs.
This Author’s Thoughts on Charles R. Flint and His Autobiography
Looking Elsewhere for Insights
This pretty much captures Flint—put deals together and move on. There is not a word about his arms dealings. Sullivan doesn't focus on Flint as a historic character of this time frame.
Comparing Flint and Watson Sr.
There is little to associate Flint's internal character and Watson Sr.'s. One way to look at their relationship is that Charles R. Flint created opportunities for Watson Sr. and others to join what was the 1920s equivalent of "corporate start-ups" and do something with them. Their historic intersection is a single point in time when Chas Flint hired Watson Sr. to save a deeply troubled C-T-R Company. Although Charles R. Flint believed that Tom Watson Sr. was one of history's greats, it is not at all apparent that Watson had the same opinion of Flint, and as was Watson's character he rarely said an "unkind word." More often than not, a researcher of Watson Sr. has to rely on "the lack of comment."

These two individuals were almost diametric opposites, but both served their unique purpose in the founding and saving of the C-T-R Company which adopted the name "IBM" from its Canadian subsidiary in 1924.
This book might be a more interesting read the second time around … but that second time will have to wait for a while.

​- Pete
Editor's interesting fact: Why there was never an "Electric Trust." 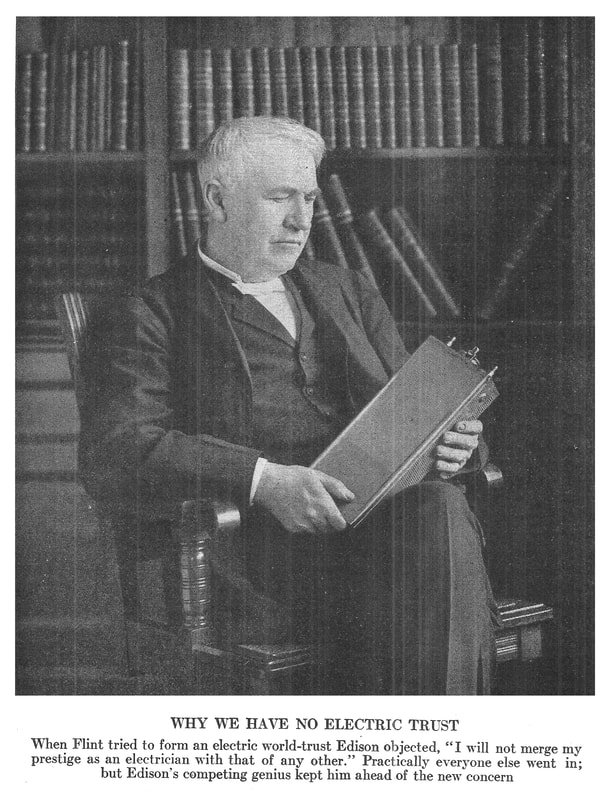