Review of "The Life of Andrew Carnegie" by Burton J. Hendrick 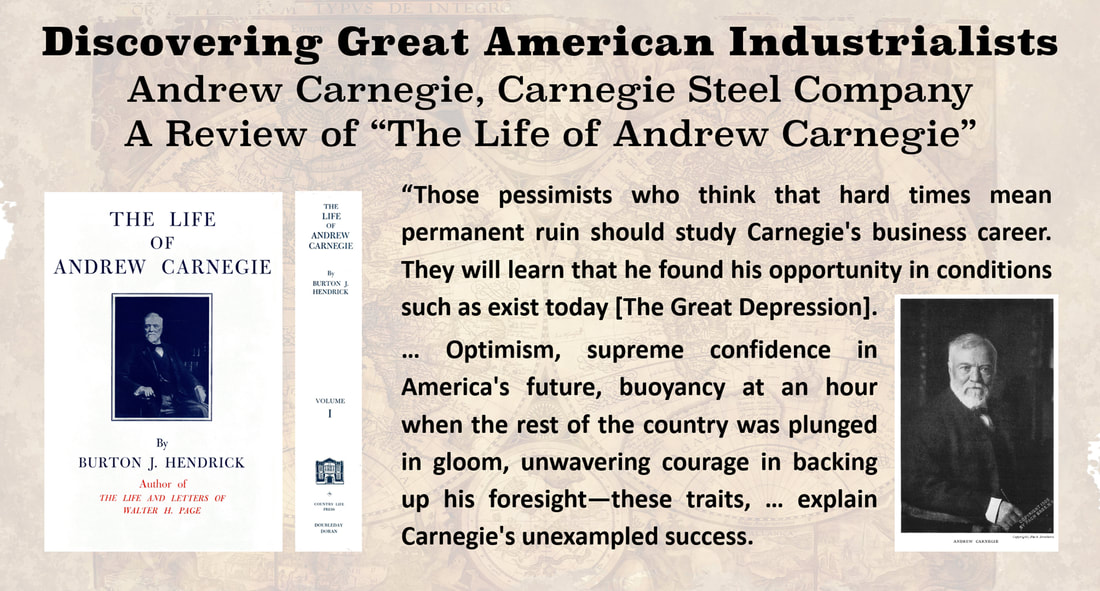 “In this new biography, Burton J. Hendrick has done more than depict the granddaddy of our modern steel industry. He has depicted that industry, for its creation and its development were so closely locked with that jovial Scot’s own life that neither man nor industry can be considered, save together. When one contemplates the steel industry and its most glorious figure, he finds himself facing the whole modern world which was blown from the Bessemer furnace.

​"This is not merely a biography, but an absorbingly told study of an epoch.”
Mark S. Watson, “An Epochal Study of an Epochal Hero,” Baltimore Sun, November 20, 1932​
A Review of The Life of Andrew Carnegie by Burton J. Hendrick
Reviews of the Day: 1932 ​(During the Great Depression)
“Personal Views of the News,” by J. E. Lawrence, The Lincoln Star, October 23, 1932
“Burton J. Hendrick, who has been three times the recipient of the Pulitzer prize for biography, approaches his material with the poise of a scholar and the fascinated attention of a man sensitive to the complexities of the human animal. At his disposal were the vast array of Andrew Carnegie’s private documents. The panoramic treatment of the era and the brilliant analysis of character combined with the enormous amount of new and important material makes ‘The Life of Andrew Carnegie’ one of the notable and significant biographies of the year.”
“Book Reviews on Two Leaders in Industries,” The Chicago Tribune, December 13, 1932
Observations of Andrew Carnegie from The Life of Andrew Carnegie
Volume I: Dunfermline (1835–1848) to Race Imperialism (1890–1908)
B. J. Hendrick on Carnegie’s Character
​
​
With the last observation it only seems appropriate to start with this observation from Volume II.
Volume II: Growth of Carnegie Domain (1893–1900) to Shadowbrook (1919)
This biography was released only a few months before the trough of the Great Depression. The country desperately needed a way forward. It was a time when anarchists and fascists were challenging the country’s economic system. This book held up a light: It was the industrialists, not the capitalists, who practiced business-first philosophies that had previously—and could now—carry the country through desperate times. Speculation on Wall Street had contributed to the current depression and many past recessions, and Andrew Carnegie’s life story was an amazing light on the path forward. Tom Watson Sr. followed his example: (1) have faith in your country, its businesses and its workers, (2) invest in your company during down times when prices are depressed, and (3) prepare to drive aggressively forward with the economy’s upturn.

During the Great Depression, Watson Sr. followed Carnegie’s example and stored his corporation’s “overproduction” in the company’s factories; he kept his top, trained employees working; he invested aggressively in factories, laboratories, and research and development; and then when the economy turned up, the chief executive officer and his corporation were ready to expand and take market share. This book offers an amazing example of Carnegie’s corporation as one  of Emerson’s lengthened shadows—an institution as the lengthened shadow of one man. It is an amazing history lesson in how a single individual can affect the course of his company’s and his country’s economic history.

Andrew Carnegie and Thomas J. Watson Sr. both practiced business-first: They invested in making their people more productive, their processes more effective, and their products more valuable. [See Footnote]
​
America is what it is because these men believed in business-first philosophies.
This Author’s Thoughts on The Life of Andrew Carnegie
B. J. Hendrick’s The Life of Andrew Carnegie is a masterpiece. The entire manuscript is to be recommended but, as usual, I will highlight several chapters that are, in this case, the best-of-the-best: (1) Volume I: “The Dawn of Bessemer Steel,” “The Disgrace of Dying Rich,” “Prologue to Homestead,” and “The Homestead Strike;” (2) Volume II: “The Sale to Morgan” and “For the Improvement of Mankind.”
​
Regarding this last point, I will close with B. J. Hendrick’s insight into how Carnegie’s philanthropy reached beyond anything that anyone of wealth had done up to this time.
“Carnegie’s original purpose, of showing men of vast wealth how to fulfill a useful purpose and help balance the necessary inequalities of the existing economic system, may be regarded as achieved. … Millionaires who today die possessed of great surpluses undedicated to public ends, die ‘disgraced’ indeed.

“To have engendered this new morale in men of his own kind, to have caused literally billions of dollars that, in the old day, would have rested in private hands, to flow in channels that promote the well-being of the common man and add to the amenities of his existence – this was Carnegie’s lasting achievement.”
​[Footnote]: Tom Watson did learn the hard way. During the Great Depression, he said that he “was ashamed” of his mistake during the Recession of 1920–21. . . . But he didn’t make the same mistake twice.
Return to Andrew Carnegie's Bibliography and Book Reviews Home Page