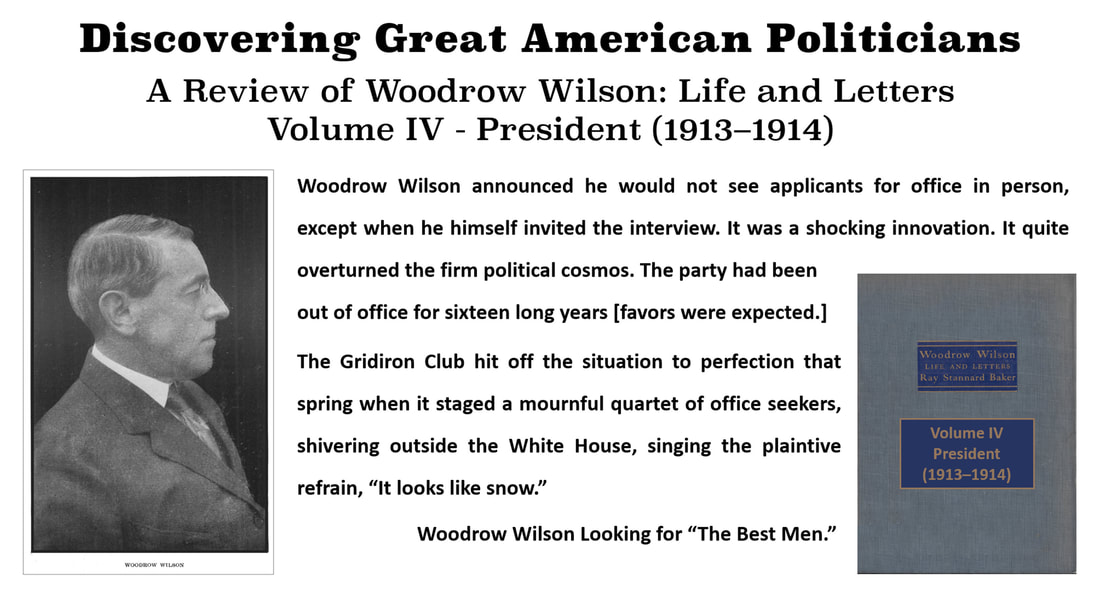 This volume was published in 1931.
A Review of Volume IV: President (1913-1914)
Volume IV: Woodrow Wilson: Life and Letters - President (1913–1914)
On Woodrow Wilson’s character:
​“One of Wilson’s strong points as a leader was his unwavering support through thick and thin of men whom he had come to trust. … Wilson was a man one could go into a panther fight with.”
​Albert Sidney Burleson, Postmaster General
“Wilson’s problem—as it was his tragedy—was the problem of the idealist, the prophet, the far-seeing statesman, set among ancient and stupid practices; outworn, if vested, traditions; among men not moved as he was by impersonal principles, but controlled by immediate interests and personal ambitions.”
Ray Stannard Baker
​“There was a strange element in Wilson’s nature. Triumph never seemed to elate him: it only drove him onward to greater conquests. He once told the present writer, after one of his most notable victories: ‘I am always suspicious of success.’ ”
Ray Stannard Baker
​​I started with this particular volume in the eight-volume set because a neighbor sent me a note about how Woodrow Wilson was such a bad president for blacks in our country. I think my neighbor is wrong. The heart of Woodrow Wilson shows through everywhere in this book.

The best expression of the dilemma of Woodrow Wilson is captured in one of the speeches he gave in 1914 before the National Press Club of Washington:

“God knows there are enough things in this world that need to be corrected. … When I think of the number of men who are looking to me as the representative of a party, with the hope for all varieties of salvage from the things they are struggling in the midst of, it makes me tremble not only with a sense of my own inadequacy and weakness, but as if I were shaken by the very things that are shaking them and, if I seem circumspect, it is because I am so diligently trying not to make any colossal blunders.”

Woodrow Wilson, National Press Club of Washington, 1914​
Lest the reader think that Mr. Baker is too complimentary of Woodrow Wilson, I believe its was a loving but balanced look at a President. He writes about his best traits with amazing insights of how these “best traits” when taken to the extreme backfired on him.

Baker gets into this with Wilson’s fastidious nature at appointing his diplomatic corps:

“On the whole Wilson’s appointments to the diplomatic service were probably up to the average, although the general shaking up and the introduction of inexperienced men were partly responsible for the poor information service of the Department of State when the Great War broke in 1914.”

Ray Stannard Baker
There is more offered (in the next volume) as Baker gets into the problems the U.S. faced with lack of good information and experienced people at the start of World War I. There was a failure in the diplomatic corps that is directly attributable to Wilson’s focus on finding the “best” men. Baker summarized this when too many of the “old guard” were either released or ignored.

He [Woodrow Wilson] was to learn in the hard school of experience that the best men were not always outside of politics: that training in public life, if the man was true at the core, often fitted him far better for important positions than the inexperienced “good man.”

Ray Stannard Baker​
One of my favorite passages concerns Wilson’s preference for working with individuals who knew their own minds and were strong and outspoken in their beliefs:

“What a pleasure it is, what a deep human pleasure, to work with strong men, who do their own thinking and know how to put things in shape! Why a man should wish to be the whole show and surround himself with weak men, I cannot imagine! How dull it would be! How tiresome to watch a plot which was only the result of your own action and every part of which you could predict before it was put on the boards!

That is not power. Power consists in one’s capacity to link his will with the purpose of others, to lead by reason and a gift for cooperation.

It [Power] is a multiple of combined brains.”

​In the absence of that detail, selecting the image above will download a collection of newspaper articles assembled by The New York Age relating to this incident. The New York Age was a black-run newspaper that I commented on in my review of Ray Stannard Baker's "The Color Line."
To offer some insight that might balance the claims of Wilson's supposed bigotry, consider this story of what Woodrow Wilson’s wife undertook in Washington D.C. and what she then requested on her death bed in her husband’s first years in the Presidency:

“Within three weeks after the inauguration we find Mrs. Wilson joining a movement already instituted by Mrs. Archibald Hopkins, visiting these unseemly backyards of the capital and making herself familiar with the charitable institutions which ministered to them. …

“Mrs. Wilson understood the general situation, grasping at a glance the fact that with 96,000 Negroes, a third of the population (of the city), the great crying need was improved living conditions ... Mrs. Wilson never made any secret to any of the men she took in the alleys that the work she was trying to do in passing the bill was to improve the conditions of the Negroes. Only 2,000 whites lived in these alleys. …

[Knowing she was dying ... on her deathbed] “She [Mrs. Wilson] had expressed the hope that she could know, before her death, of the passage by Congress of the bill in which she had been so much interested, providing for better housing conditions in the crowded alleys of Washington.

“Congress was notified, and acted quickly, so that before she became unconscious she was told that the Senate had passed the bill, and that the House would take similar action.”

Ray Stannard Baker​
I do wonder how many of “us” on our death beds will be thinking of others so unselfishly?

I look forward to walking and talking with both Mr. and Mrs. Woodrow Wilson someday in a better place. May He bring us peace acquired through knowledge, pursued with patience to achieve wisdom, which will lead us to better understandings of each other.

I must agree with William A. White’s review: I did not know Wilson; I did not really care until I read this book; Now I believe he was more than most of our presidents have been or ever will be without a knowledge of our American history—a knowledge of our better leaders and a knowledge of their failings. This is written understanding that idealists appeal to my sense of equality, justice, and mercy, but Wilson is also a supreme example of how idealists must so often compromise on their beliefs to achieve what they want. If they—Woodrow Wilson included—were superhumans with unending energy supplies and undefeatable optimism, one gets the feeling the world would be a better place. Unfortunately, Wilson was as we are: human.

Those who write evil of him, haven’t finished their homework—and neither have I. "We" need to work on "our" ignorance—"our" lack of knowledge, and research further to inform "our" personal opinions, lengthen "our" platitudes, and transform any of "our" unsocial-media to social-media posts. Of course, this is not the position a person of agitation and irritation such as William Monroe Trotter would take, but as Baker wrote in "Following the Color Line," it may take both types of individuals to move the human race forward. Let's just not disrespect each other in the process.

There is so much in this book that defies a short review. Read it and understand why William A. White wrote what he did, and with whom I, so far, agree:
“I 'too' bow my head.”