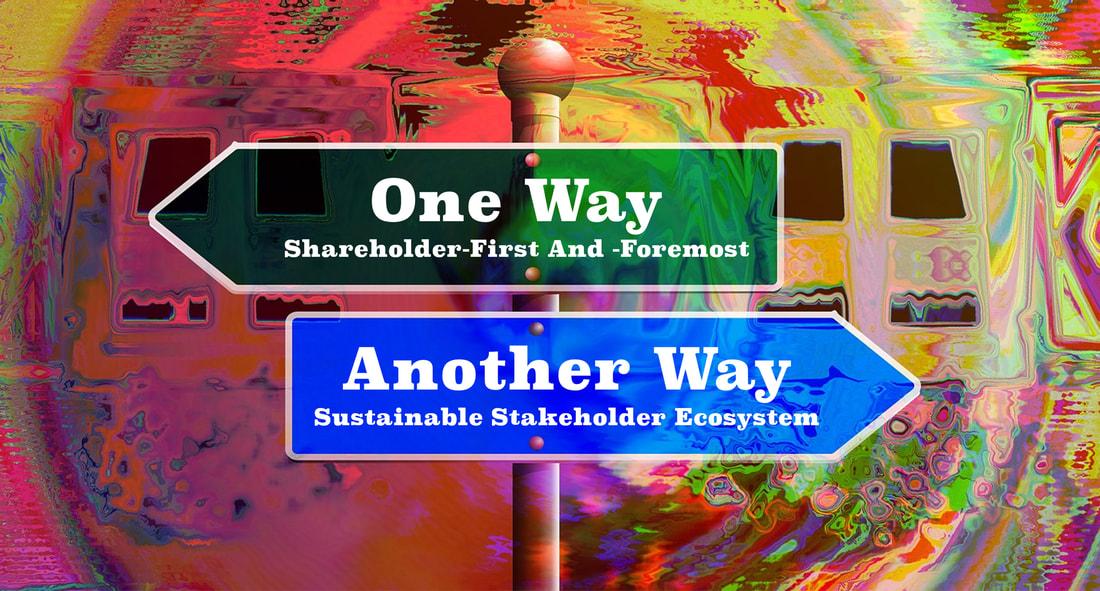 IBM was founded on the principle of profit for customers, employees and shareholders with a responsibility for these stakeholders to have a positive impact on society. Through an equitable distribution of its profits, the corporation created a sustainable stakeholder ecosystem based on enlightened self-interest: the success of one was maximized through the joint success of all the others.

Tom Watson summarized his philosophy of business this way:

​​Every street should be wide enough to be a two-way street.

​​​Thomas J. Watson Sr., 1942, Endicott, New York​
​Shareholders Need Employees that Are Engaged, Enthusiastic and Passionate
​A Two-Way Distribution of Profits Produced Amazing Shareholder Returns
Tom Watson Sr. told his shareholders that employee benefits existed “not because of any philanthropy on the part of myself or my executive staff or the directors and stockholders. … When you add up the amount of money we spend on insurance, vacations with pay, country club, retirement plan, health and accident plan, and so forth, it comes to a large sum. No company could go on if that were philanthropy. … We do it because our people do a better job everywhere.”
​
He and his son constantly reminded their shareholders of this fact in their annual meetings.

​The fruits of this symbiotic relationship between chief executive, customers, employees, and shareholders returned amazing results for both Watson Sr.’s and Jr.’s investors: 17% compound annual growth rate (CAGR) over 32 years, and 21% CAGR over 15 years, respectively, far outdistancing an investment in large company stocks.

​A One-Way Distribution of Profits Impacts Shareholders’ Returns
In 1995, Louis V. Gerstner started buying back IBM shares while continuing to reduce U.S. employee retirement benefits with the introduction of the pension equity plan (PEP). In 1996, IBM renewed its annual dividend increases for shareholders, and as IBM’s profits and revenues reached record highs, Gerstner issued two, 2-for-1 stock splits in 1997 and 1999. And as the stock printing presses rolled ever onward, the chief executive continued share buybacks. Profit redistributions were now flowing to shareholders and top executives alike. But, so far, all the employees had experienced were cuts. For them it was as if IBM had never recovered from its 1993 brush with bankruptcy.
​Sales productivity flattened in 1995 and has been in a constant decline since 1999 [Read: IBM’s Non-Union, Two-Decade-Long Work Slowdown]. Profit productivity was propped up by aggressive bookkeeping and financial engineering: (1) selling of tangible assets (the “not-profitable-enough” divisions such as the PC and x86-Server Divisions), (2) transferring wealth from employee pension plans, (3) reducing employee benefits, and (4) workforce rebalancing.
​IBM’s twenty-first-century decline in revenue and profit productivity reflects the impact of ignoring an employees’ state of mind, and IBM’s shareholders have not escaped unscathed.

As of 2021, IBM's 21st Century shareholders have received only 4.12% CAGR (including dividends) over two decades—an investment return that both the Dow Jones Industrial Average and a Morningstar large company benchmark index outperformed by returning 8.7% and 8.1%, respectively.

​This is the shareholders' payback for an investment of more than a quarter of a trillion dollars—$176 billion in stock buybacks since 1999 and $92 billion in acquisitions since 2001.

Certainly, maintaining employee enthusiasm would have cost a lot less than a quarter of a trillion dollars, and, based on IBM’s CAGR returns of 17% and 21% under the Watsons, would have yielded a far better return for shareholders.
A Productivity Corollary That Didn’t Need to Be Proven
IBM’s twenty-first-century leadership has proven the corollary to Watson Sr.’s and Jr.’s belief: performance drops everywhere when the executive leadership fails to adequately reward its employees’ performance. While some may believe it is the chicken or egg conundrum, IBM’s traditional founder and chief executive officer faced a similar situation. In 1914, as IBM’s new chief rooster, Watson Sr. kept the company from laying an egg by investing his time (but, initially, very little money according to Watson Jr. in Father, Son & Co.) to improve employee enthusiasm: such is the responsibility of a great chief executive that understands human nature and its effect on the corporate bottom line.

​My mind went back to the first convention I held after I came into this business … We had very few men. We had very little enthusiasm, but what we did have … gave us a great start, and the other men fell in line. Enthusiasm is the basis of all great things.

​But the once fatted calf is looking lean.
​A Foreboding Sign for the Future
​​This century’s profits have been propped up by a massive transfer of wealth, a corporate wealth that two of America’s greatest twentieth-century industrialists accumulated by providing superlative service to their customers through enthusiastic, engaged, and passionate employees.
​
Until shareholders acknowledge the importance of enabling and empowering enthusiastic employees to provide service to their customers, investors should expect short-term financial engineering to replace the mechanics of running a business properly. Until IBM’s twenty-first-century leadership reverses its current human resource practices, long-term shareholders should not expect the value of their investments to be maximized.