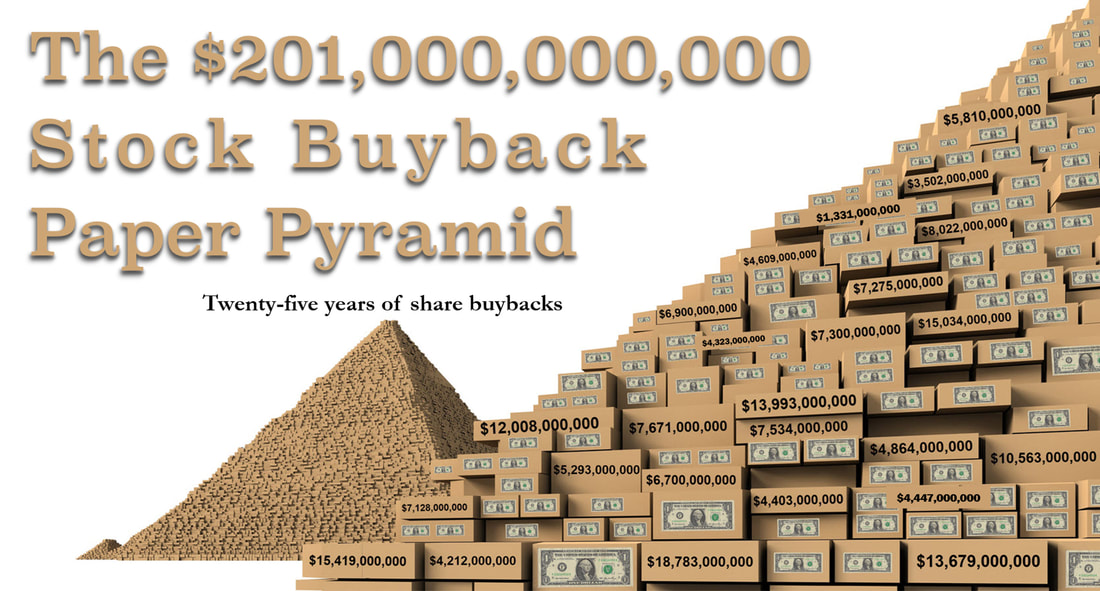 In 2019, Virginia M. (Ginni) Rometty stopped IBM's share buybacks after a twenty-five year run: 1995 through 2019. The IBM 2020 and 2021 Annual Reports state that, we have "$2.0 billion remaining in share repurchase authorization." So the share buybacks could resume at a moments notice. Let's hope not as there are better investments a technology company can make than buying paper.
$201 Billion in Stock Repurchases Failed to Produce Societal Wealth
How Much Did IBM's 21st Century CEOs Spend on Share Buybacks?
How Much Did IBM Spend on Share Buybacks?
How Much Has Each of IBM's Chief Executive Officers (CEOs) Spent on Share Buybacks?
Are IBM's Share Buybacks Finished?
Corporations Don’t Create Societal Wealth by Playing the Wall Street Game
​When America’s twentieth-century chief executives manufactured wealth for their customers, employees, shareholders and societies through their corporations, they created this country’s greatest and most formidable asset. To these businessmen, it was always business-first: investing in making people more productive, processes more effective, and products more valuable.
"Wealth is not increased by stock activity; at best, it only changes hands. Wealth is not created; it is but a score in a game. I was once quoted as saying that the stock market was a good thing for business. The reporter omitted my reason – because it drives so many men back to legitimate business by breaking them."
Henry Ford, Today and Tomorrow​​
IBM, of any company in the 21st Century, is the exemplar of Henry Ford’s insight into the failure of a corporation to create societal wealth through high levels of stock activity. On average, since 1999, IBM has repurchased 67 million shares of stock annually through stock buybacks, but it has also issued on average 18.3 million shares every year for “stock-based compensation” and “stock purchase plans” reducing the average annual drop in outstanding share repurchases by more than 25%. (This does not include the 5 million shares issued for executive compensation in 2020 since IBM did not buyback shares. Because there were no share buybacks in 2020, the number of shares outstanding at year end increased year-over-year for the first time since Louis V. Gerstner did a two-for-one stock split in 1999.)

Some financial analysts believe a stock repurchase strategy is a sound practice for a corporation to return value to its shareholders. They write that it is prudent to buy back corporate stock when it is undervalued. Of course, this means that a chief executive is smarter and is less vested and emotionally attached to the stock than the overall market when he or she impartially values their corporation; and as I discovered in my research, IBM’s executive team has never been able to outsmart the market.

​In a first for the corporation, the executive team attempted to manage IBM’s stock price. The team bought back corporate stock when they believed it was undervalued. They then reduced the price of the stock through a four-for-one stock split under the premise of making it more affordable for the individual shareholder. Even though the number of shareholders climbed by more than 25%, the stock returns diverged and fell dramatically behind a large company stock index it had tracked closely for most of a difficult decade.

​​IBM Is no Longer Producing Societal Wealth
IBM’s current stock buyback plan, though, is a different approach. It is not the purchase of a corporate stock when it is undervalued. IBM’s corner office has been repurchasing its stock for the last two and a half decades without a break.

This is more akin to dollar cost averaging—a technique recommended for individuals. With this strategy, individuals buy a fixed dollar amount of stock on a regular schedule over a long period of time, regardless of the share price. ​This is a tactic to maximize an individual’s long-term wealth in the stock market by investing in stocks through good times and bad; it is not a viable strategy for a corporation such as IBM to invest in stocks to create shareholder wealth when it should be investing in business-first: making people more productive, processes more effective, and products more valuable.
Even with a massive infusion of cash ($176 billion), IBM’s chief executives have failed to keep the corporation’s market value on par with inflation. If IBM’s 1999 market value had risen with inflation, the stock price would have been approximately 160% higher at the end of 2021—$349 a share not $134.

​The twenty-first-century executive team of Gerstner-Palmisano-Rometty needs to be remembered for the results of the last two decades in Henry Ford’s terms: they have not been driving a legitimate business; they have not created societal wealth; they have been playing a shell game, a financial sleight of hand, shuffling around two different forms of paper—stock certificates and greenbacks.

These three chief executives have invested $200,803,000,000 over the last twenty-five years on stock repurchases only to have the corporation’s market value drop by more than 40% since 1999. If enough corporations had deliver similar results at the same time, the combined effect would have been a two-decade-long bear market​—or another Great Depression.
​​IBM’s Wall Street Game: Using Corporate Wealth to Buy Paper
In 1995—one year after it cut 35,000 jobs and lost $8 billion—IBM started its buybacks. These stock buybacks were funded, in part, by raids on IBM’s worldwide pension plans in 1995, 1999, 2008, 2009 and 2012: (1) implementing the pension equity plan, (2) starting the U.S. cash balance plan, (3) freezing the U.S. defined benefit plan, (4) closing the U.K. defined benefit plan, and (5) changes to IBM’s 401(k) Plus plan, respectively.

​Every chief executive officer must decide if it is Wall Street-first or business-first. Harvey Firestone of Firestone Tire & Rubber Company, Henry Ford of Ford Motor Company, Owen D. Young of General Electric Company, George F. Johnson of Endicott Johnson Company, Tom Watson Sr. and Watson Jr. of IBM, and many other early twentieth-century industrialists believed the former was a sure path to eventual failure.

​The moment that officers or directors of a company begin to speculate in its stock, the ruin of the company is not far away . . . for it is impossible to serve both the company and the stock market.