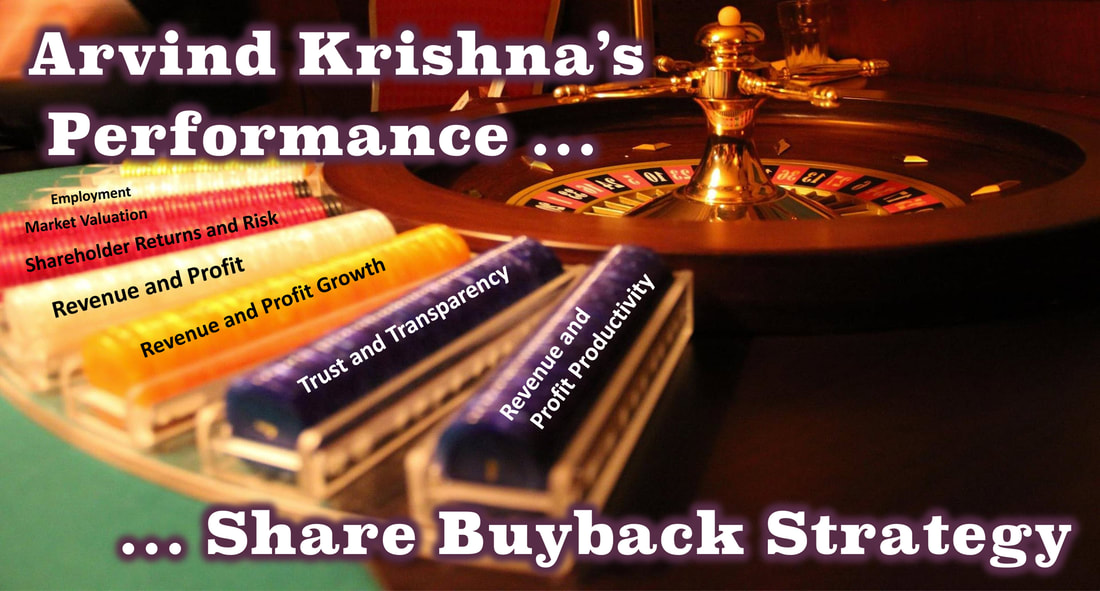 Arvind Krishna's First-Year Share Buyback Performance
Editors note: IBM "su-spend-ed" share buybacks in 2019. Arvind Krishna has $2,000,000,000 authorized to "spend" by the board of directors that Virginia M. (Ginni) Rometty left unspent. He has not offered any insights into his share repurchase strategy. This is written in the hope that he will understand how share buybacks work against the best interest of all the stakeholders in a corporation: A dollar invested in paper is one dollar less spent in making people more productive, processes more effective, and products more valuable. That is why this web page exists: to document the amount of the corporation's profits the company has been spending on paper.

Based on the shareholder returns of the three times IBM has attempted stock buybacks, he should ask the board to rescind this authorization [Read: IBM Case Study: Do Share Buybacks Work?].

Surely a technology company can find a better investment for its money than its own stock.
​Evaluating Arvind Krishna's First-Year Share Buyback Prioritization
The following charts may seem a bit unusual, but Gerstner's, Palmisano's, and Rometty's focus on spending $201 billion of the corporation's profits since 1995 on their own stock, is largely a 21st Century phenomenon. This executive team seems to have little knowledge of their own corporation’s history as two former chief executives attempted share repurchase strategies that failed—Frank T. Cary and John F. Akers. IBM’s history lesson is that share buybacks shortchange all its stakeholders (even its shareholders) by depleting needed investments in business-first—making a corporation’s people more productive, its processes more effective, and its products more valuable.

Share buybacks compete with other possible investments (such as research and development) that could provide more beneficial and long-term results. Visualizing share buybacks as "profits spent" also documents the corporation’s overriding focus on investing in paper as not many other investments come close to this investment's consistency and scale.
​
Therefore, the following charts document the complete picture of falling profitability and an overriding strategy of investing in paper instead of in making the business more productive and competitive.

When matching the expenditures with the returns even shareholder-first and -foremost seems to miss the mark.

Only a me-first and -only strategy seems a viable explanation.

It will be interesting to see what Arvind Krishna does.

- Pete
The Impact of Diverting Business-First Investments into Stock Buybacks

​IBM needs to “end” its share buybacks, not, as it wrote in its 2020 Annual Report, “susp-end” them. There is still $2 billion authorized by the board that is available for such repurchases. If Arvind Krishna wants to “resume” share buybacks, the shareholders should demand a thorough performance review, not just pick up where Team GP&R left off . . .