IBM Must Decentralize to Grow Again 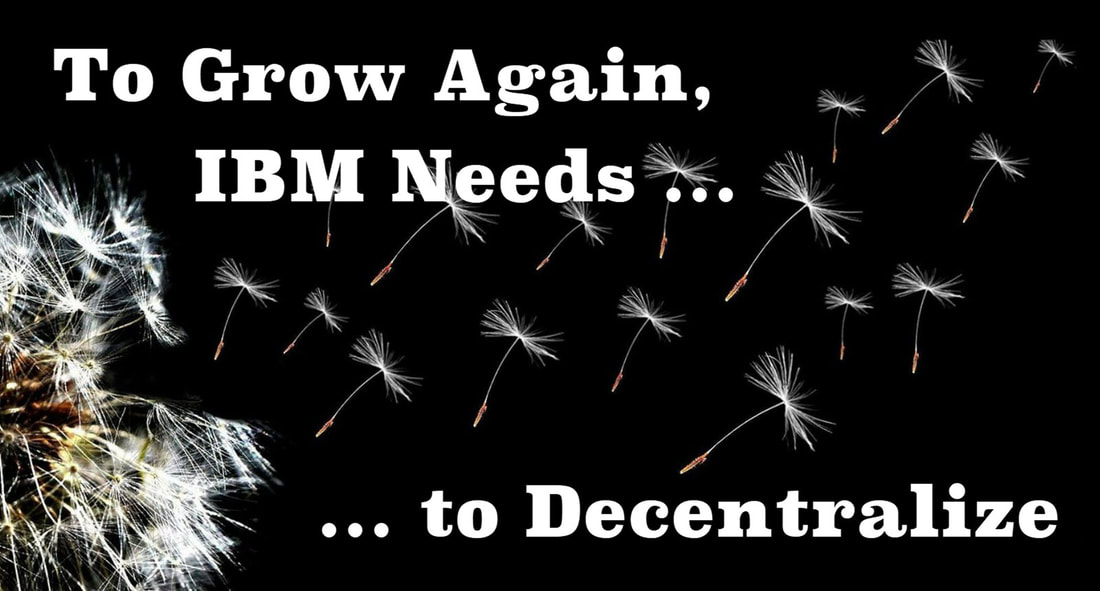 What must IBM do to grow revenue and profits again?

IBM must first dismantle its financial autocracy. It must then decentralize and empower its management teams throughout the organization. General Motor's Alfred P. Sloan's concept of coordinated decentralization is one model its chief executive officer might consider following.
Decentralization Is IBM’s Path Back to Productivity Growth
Alfred P. Sloan’s Management Style
Alfred P. Sloan Jr. was General Motors’ chief executive officer for twenty-three years and a member of its board of directors for forty-five years. His book, My Years with General Motors, is a relevant read for any analyst struggling to understand the significant downward trend in IBM’s sales and profit productivity in this new century. Sloan, an industrialist, friend of Tom Watson Sr., and a proven, business leader, clearly defines one overriding theme in his book that is applicable to this article.

Sloan struggled to maintain control of his decentralized operations. His constant skirmishes are the highlights of almost every chapter from the preface to the last page. His years in the corner office of General Motors was a series of constant battles against two extreme management tendencies that can lead to autocracy or anarchy—being overly centralized or overly decentralized, respectively. He was determined to avoid the extremes and extract the unique benefits available from two seemingly, diametrically opposed organizational structures.

​He never failed, though, to show that he was a true believer in the benefits of decentralization—or rather, the constant struggle to extract the unique benefits of walking the fine line between centralization and decentralization.
Is this the Right Question: Centralize or Decentralize?
Fundamentally his rule as to the supremacy of centralization or decentralization was: It depends! The business leader must constantly be flexible in his or her approach. No trite platitude will suffice here as each business and each new crisis – given the timing and management experience – will require new thought and actions.
​
For example, he recounts taking control of the company to survive the Recession of 1920-21. He walks the reader through the centralization they actively pursued to gain control of the corporation’s inventory. He then describes how – once the emergency was over – the top management team reversed this decision and decentralized.

​They implemented inventory policies and returned control (operations) back to the individual divisions. He describes the formation of policy committees to formalize the demarcation lines between corporate and divisional responsibilities; and he covers how this model was one of the major factors why General Motors remained in the black during the Great Depression. It was how the organization was able to adapt so quickly to assist in the nation’s struggle against fascism during World War II.
Applying Sloan's Management Principles to IBM
The changes Alfred P. Sloan implemented at General Motors in the Recession of 1920-21 are quite similar to Louis V. Gerstner’s centralization of control at IBM during its Financial Crisis of 1992-93. It was necessary at the time to first get the company financially back on its feet, restore confidence, and accept the unattainability of John Opel’s “$180 Billion IBM” by 1994.

Unfortunately, Lou not only failed to decentralize after the recovery, he created IBM’s financial autocracy. IBM’s current problems can be traced back to this policy of over-centralization and empowerment of the corporation’s financial autocracy. Samuel J. Palmisano only extended this concept to its logical extreme with his two, five-year, earnings-per-share roadmaps.

Lou Gerstner’s, Sam Palmisano’s, Ginni Rometty’s, and, now, Arvind Krishna's on-going policy of over-centralization and defaulting of business decisions to a financial autocracy has destroyed initiative, blurred ownership responsibilities, failed to offer leadership growth opportunities to the corporation’s personnel, disconnected product plans from customer and sales input, and is an inflexible organizational structure – in short, over-centralization has limited a major benefit of decentralization, as highlighted by Sloan, that enables a company to adapt to new conditions.
​
This is one reason IBM has been unsuccessful so far in the new century in adapting to market changes, and it explains why revenue and profit productivity flattened two years into Lou’s tenure (1995) and has been in a continual decline since 1999—this entire century.
A Change of Leadership is Needed
IBM needs a new leader with a new temperament and better communication skills to once again strike the correct balance between centralization and decentralization. The leadership spirit that is needed can be found in this insight from Alfred P. Sloan.

It takes more than the structural design of an organization to ensure sound management. No organization is sounder than the men [and women] who run it and delegate others to run it. They are in a position to tip the balance in a decentralized organization toward centralization and even one-man [or one-woman] rule. ... long-term survival depends upon [the organization] being operated in both the spirit and the substance of decentralization.

IBM needs a leader to bring back the substance and spirit of "coordinated decentralization." With Ginni gone, Arvind Krishna should have gone to work to decentralize the corporation. James Whitehurst would have been a logical choice to lead this decentralization. Unfortunately, with his departure from the company that will not happen.

Are the short-sighted, earnings-per-share, bureaucrats of centralization keeping control?

We will see soon enough.