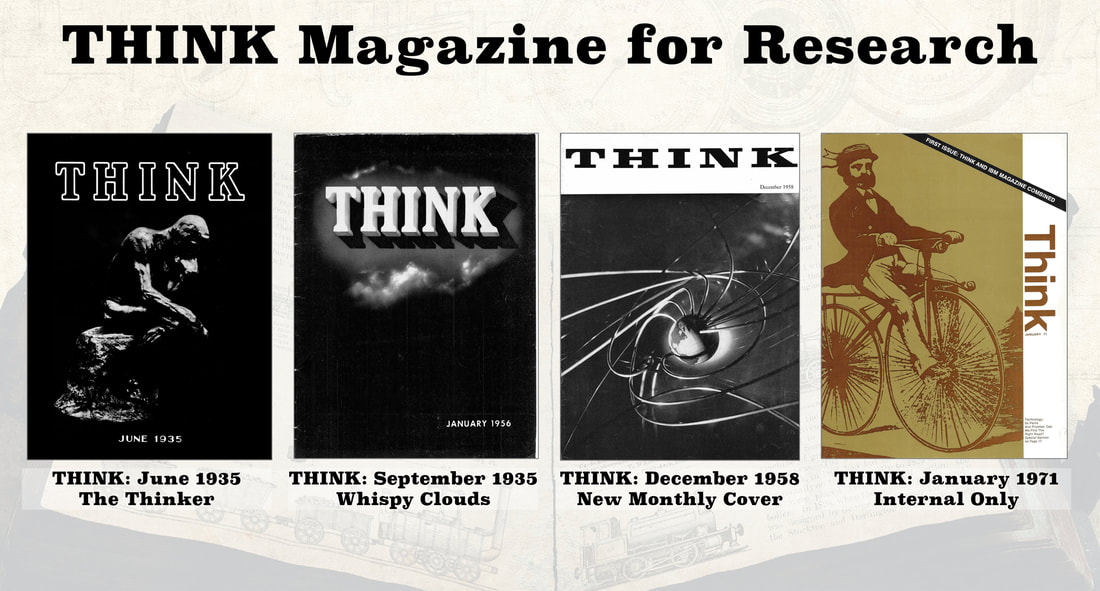 THINK Magazine: 1935 to 1970
THINK Magazine was published from June 1935 through almost the turn of the century. Through December 1970 it was an external publication distributed at no charge to an external audience but especially for customers. It rarely had information about IBM (some authors have written that it "never" had advertising but this is inaccurate as early issues of the magazine did have advertising) but was rather a publication devoted to creativity and was an eclectic collection of different articles by recognized authors, artists, educators and business people of the time.

The type, diversity and range of thoughts covered in this magazine serve as the ultimate tribute to Mr. Watson's oft used and repeated word, "THINK." ​Until the time of Watson Sr.'s death, every magazine began with his editorial. The article below "Introducing 'THINK'" was his introduction to the magazine in June 1935.

​He would write 252 continuous editorials for each of the THINK Magazines until his death in 1956, when a special issue was released honoring his memory: the July-August-September 1956 issue.
THINK Magazine: 1971 to 1999
THINK Magazine in January 1971 was combined with IBM's internal magazine Business Machines (formerly IBM Business Machines Newspaper). Effective with this issue, the merged publication was distributed to employees only; the outside circulation of THINK was discontinued. The combined publication, named THINK, carried articles about the business, but, at times, also articles about other subjects, as the former THINK Magazine did for 36 years. This is apparent in the article below when four scholars share their thoughts on the coming machine age: The Object of Human Invention Is To Make Us Humane.
Return to the "IBM Publications" home page