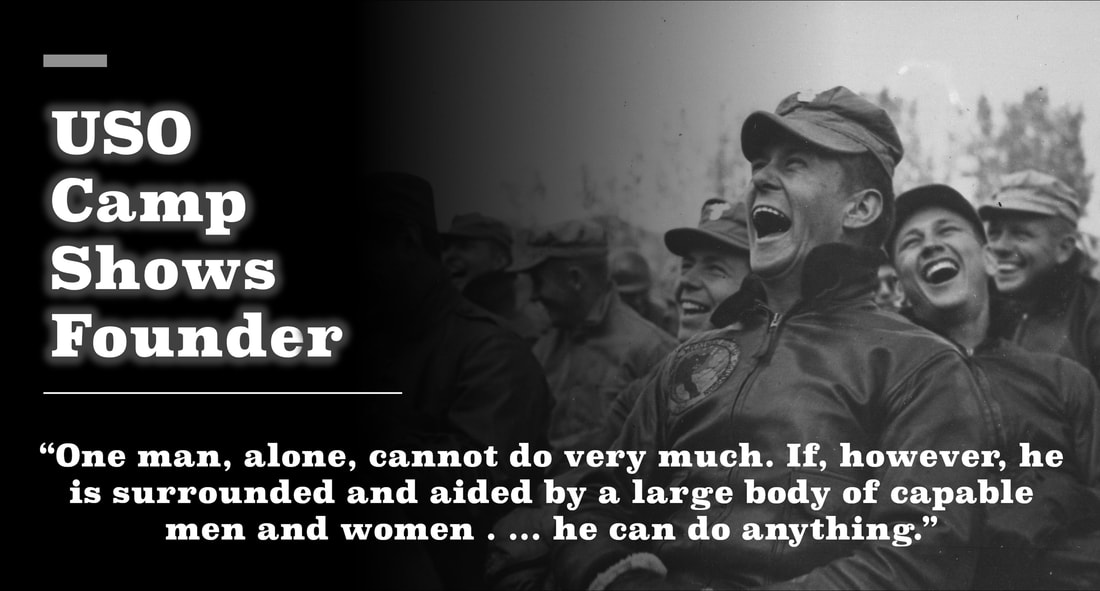 Tom Watson Sr. and the USO Camp Shows
Overview
When we celebrate Thanksgiving every year every serviceman that has ever attended a USO show should give thanks that not only can an American be a great industrialist but a great humanitarian. The following is a short excerpt from a future work coming in the next few years about Thomas J. Watson Sr.

It will be the next major book by Peter E. Greulich.
Tom Watson Sr. and the USO Camp Shows
Watson Sr. stated, “The first project to be undertaken will be the furnishing of Christmas gifts and remembrances to the men of the [27th] division, many of whom will for the first time in their lives be away from home on Christmas.” One of the local chairman probably stated it best: “We want to show the officers and men of the division that the people of the state appreciate the personal sacrifice. ... Every 27th Division man will have a Christmas box on Christmas morning, thereby eliminating many lonesome corners in the tents on that day.”
The team accepted the challenge—the money would just have to be found. They changed their name to the Friends of the New York State Soldiers and Sailors, Inc. Watson Sr. then presented Mayor LaGuardia, along with his honorary chairmanship, the first of what everyone was estimating to be 25,000 yule gifts.

From a December 13, 1940 Binghamton Press Article which describes name change and Watson in charge
But now, so many people were getting involved to assist the troops that they were tripping over each other.
The pressure was now on Watson Sr. to make it happen.
The Rise of the Citizens’ Committee’s Mobile Camp Shows
By the fall of 1941, the Citizens’ Committee’s seven independent traveling shows had reached 3,200,000 servicemen east of the Rockies. West of the Rockies other organizations were getting started. All these organizations—because of the growth of the military—were outgrowing the financial abilities of their private contributors, and they were in direct competition with the recently formed United Service Organizations—an organization created by FDR to coordinate the activities of the Salvation Army, YMCA, YWCA, National Catholic Community Services, National Travelers Aid Association, and the National Jewish Welfare Board.
Watson Sr. founded the Friends of the 27th Division of New York; he transitioned it to the Friends of New York State Soldiers and Sailors; he ensured funding for the Citizens’ Committee for the Army and Navy and met not only the recreational but spiritual needs of the troops; he was a founding member of the USO Board of Directors and served on the board until it closed its World War II doors.

At that time, Harry S. Truman wrote to the USO President:

"The USO has now fulfilled its commitment and discharged its wartime responsibility completely and with signal distinction. It therefore becomes my privilege to award an honorable discharge to the organization, to its member agencies, to the Camp Shows affiliate, to the million and a half volunteers, and to the thousands of devoted staff members."
​ Tom Watson was one of many that deserves credit
If you served within any of the above mentioned organizations, worked on the Watson Committee, worked with Tom Watson in any of these organizations or have letters from family members concerning this time period, we would love to hear from you: [Contact us]
Return to the Thomas J. Watson Sr. History Home Page