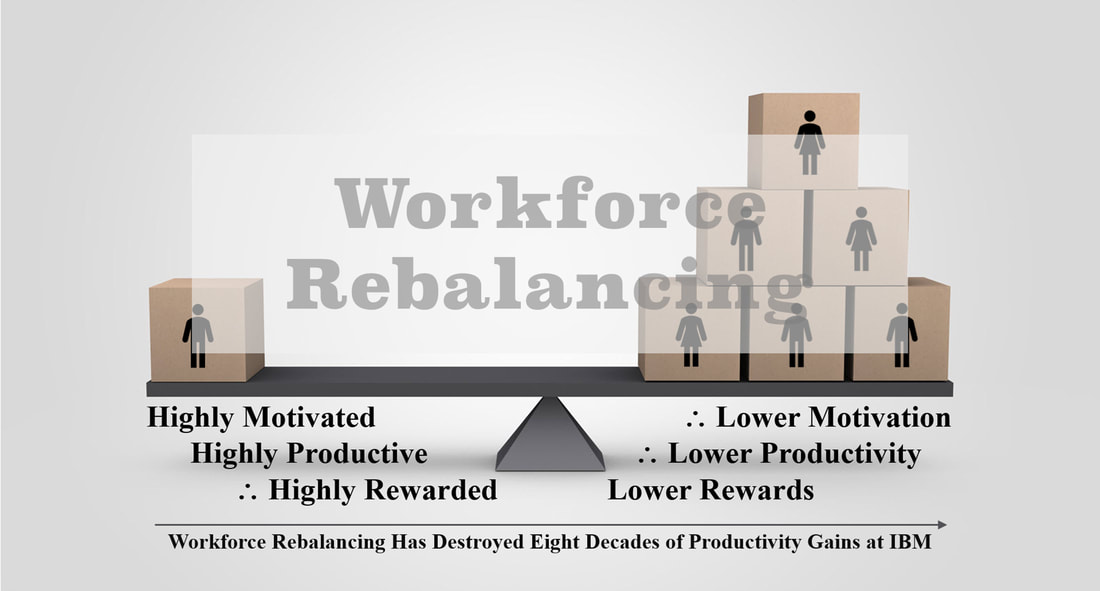 IBM’s twenty-first-century Chief Financial Officers (CFOs) have lost sight of their primary duty to their corporation: spend money to make people more productive, processes more effective, and products more valuable. It is what I call "business-first." In this vein, Tom Watson shared his thoughts with the Controller's Institute of America the year before the trough of the Great Depression:

​If the controller can find more ways to spend more money where it will expand the business, where it will bring in more orders to the factory, that will be the greatest service he can perform for the business with which he is connected.

​Thomas J. Watson Sr., Controller’s Institute of America, New York, N. Y.​​, 1932
IBM's Workforce Rebalancing Is Financial Engineering
The Promise of Workforce Rebalancing
Satisfy these requirements and net income per employee should increase exponentially. At least, that has been the financial promise behind offshoring workloads. ​Unfortunately for IBM shareholders, two out of three in the game of business isn’t necessarily a long-term winning strategy.

Workforce rebalancing is an unrealized financial promise because the last of these conditions—operating at the same or higher levels of sales and profit productivity—has not been realized. IBM has been increasing profits by lowering wages, but this has been offset by the ever-decreasing sales and profit productivity of a newer, larger, more disconnected and widely dispersed workforce.

This is a tortoise and hare race: the hare—workforce rebalancing—provided a short-term, very-sharp, increase in profits while the tortoise—employee productivity—produced a long-term, very-gradual, decrease in sales and profits.
Unfortunately, it has taken a long time to visualize (and chart) the damage done by the sales productivity tortoise. This, obviously, is not an organization that is producing products that are in high demand or a company that will attract top-notch salesmen and women.

When the productivity tortoise overtook the workforce-rebalancing profit hare in 2011-13, the impact was dramatic:

IBM is a poster child for the latter case. Its executive officers have failed to successfully replace its highly-productive, highly-motivated employees to the detriment of the corporation's customers, shareholders and supportive industrialized societies. As I cover in THINK Again: The Rometty Edition, IBM’s sales and profit productivity is not competitive.

Even after the Kyndryl divestiture—as reflected in the charts below—there has been no improvement in the competitiveness of IBM's sales and profit productivity.

​From a productivity perspective, the corporation is only capable of outperforming services-based organizations.

IBM is remaining profitable but, within its industry, it is not optimizing profits.

Eventually, this is a go-out-of-business proposition.
​​An Embarrassing Seventeen-Year Profit Performance Record
​Probably more concerning, in the last eight years, profit productivity has dropped by more than 55% even though Rometty sold the x86-Server Division under the premise of improving corporate profitability.

Samuel J. Palmisano, who loved talking to the press and analysts about his new records in the areas of revenue, pretax earnings, earnings per share, and free cash flow, should also be remembered as a major contributor to this never-seen-before dismal record in net income per employee. Can’t all analysts agree that his two, earnings-per-share roadmaps were unmitigated failures and set the corporation up for failure?

​Shouldn’t it have been intuitive that employees who referred to themselves as roadkill in the face of these roadmaps were less productive than when they worked in an environment that encouraged self-motivation?
​​The Impact of Financial Engineering
IBM spiked its profitability by replacing its highly-productive, highly-motivated and therefore highly-paid individuals with lower-wage, less-productive, less-motivated employees: This increased short-term profits but it has not optimized long-term profits because of productivity issues.

If IBM’s 307,600 full-time, equivalent employees were as productive in producing revenue at the end of 2021 as in 1999 (in inflation adjusted dollars), the corporation would have attained revenues of $126 billion instead of $57 billion. To state it (cynically) in terms that even a twenty-first-century, financial mind can understand—a reduction in headcount rather than increased revenue, the corporation could have achieved its $57 billion in revenue with only 139,278 employees—168,322 fewer employees.​ Hopefully, the later of these won't come to pass.

True chief executive officers understand the importance of an engaged and productive workforce.

They focus on their most important asset. …