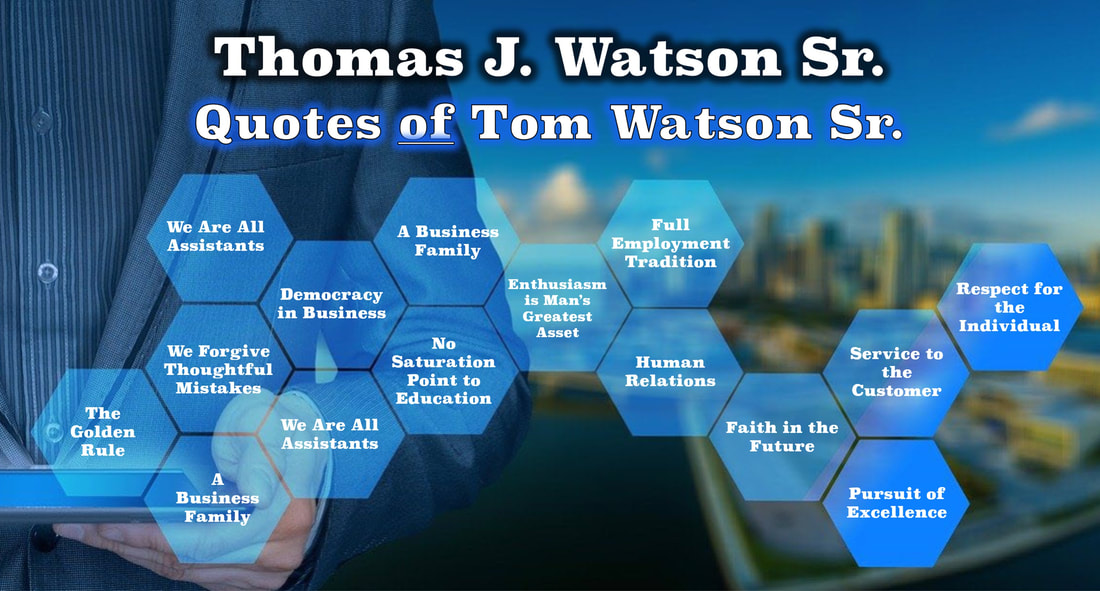 Tom Watson Sr.'s and His Peers' Ideas and Ideals
They seem quite appropriate if we are to proclaim not just the humanity of one of America’s greatest business leaders, but to set the historical record straight on the ideals of his peers.

​Tom Watson Sr. did not walk alone. He was one of many.
"​Wealth can no more be safely created and permanently held by the mere shuffling of securities, than character can be created by shuffling cards."
​John Wanamaker, Golden Jubilee, 1911
"If you want me to come in here and operate this business for the benefit of the business, I'll do it, but I will not have anything to do with the operation of it from a stock standpoint."
Tom Watson, C-T-R Company Board of Directors, The Lengthening Shadow
"​There is something in business bigger than the dollar. … A legitimate business must be of real service to the public and promote economic progress. Only when a man feels that he is working for the general good as well as for his own can a man do his best."
​Tom Watson, Sales Meeting, 1919
"The president who thinks that his company exists mainly to supply stock quotations is in exactly the same case with the workman who looks at his day's work not as a means of doing something, but as a means of getting money without exertion."
​Samuel Crowther, Common Sense and Labor, 1920
"No policy in this business is permanent because there is no policy that is perfect."
​Tom Watson, “How the IBM Formulates its Policies,” 1926
"​I am firm in the thought that over-organization holds many dangers … It is perfectly possible, although not generally recognized, that a highly paid executive may, through too close organization, be merely a machine unit."
​George Eastman, System – Business Methods at Work, September 1931
"In these times, when independent thought and action should be the order of the day, employees resent an attitude of paternalism. It is a well-known fact, however, that an employee’s efficiency suffers if his mind is ill at ease, and that worry over financial troubles is one of the most powerful sources for the destruction of mental peace."
​Tom Watson, Address to Mutual Savings Banks, 1933
"The truth prevails, but it's a chore."
​Jan Masaryk, Tom Watson luncheon in Masaryk's honor, July 6, 1945
​"We, in the United States of America, are blessed with unusual advantages and opportunities. As a democratic people, we may honestly and properly differ with one another at many points. But, in the final analysis, as a nation we have a heritage and tradition which bind us together, regardless of creed or color, origin or position.

​"And this heritage and tradition of a democratic people are worth working for.”
​Tom Watson, "Quotable Quotes," December 1940
"​The young people of today are, in my judgment, growing up with more intelligence and tolerance than those of the past. … That is why I am so optimistic about the future. … When you get out on your own, you are going to need to guard against two types of minds: The conservative, which believes that nothing new should ever be tried; and the radical, which thinks the impossible can be accomplished immediately.

​"I hope that you students will stay in the center and develop a progressive mind."
​Tom Watson, Huntingdon College Chapel, March 1941
"You can get capital to erect buildings, but it takes people to build a business."
​Tom Watson, The Daily Banner, October 29, 1954
Return to the Thomas J. Watson Sr. History Home Page