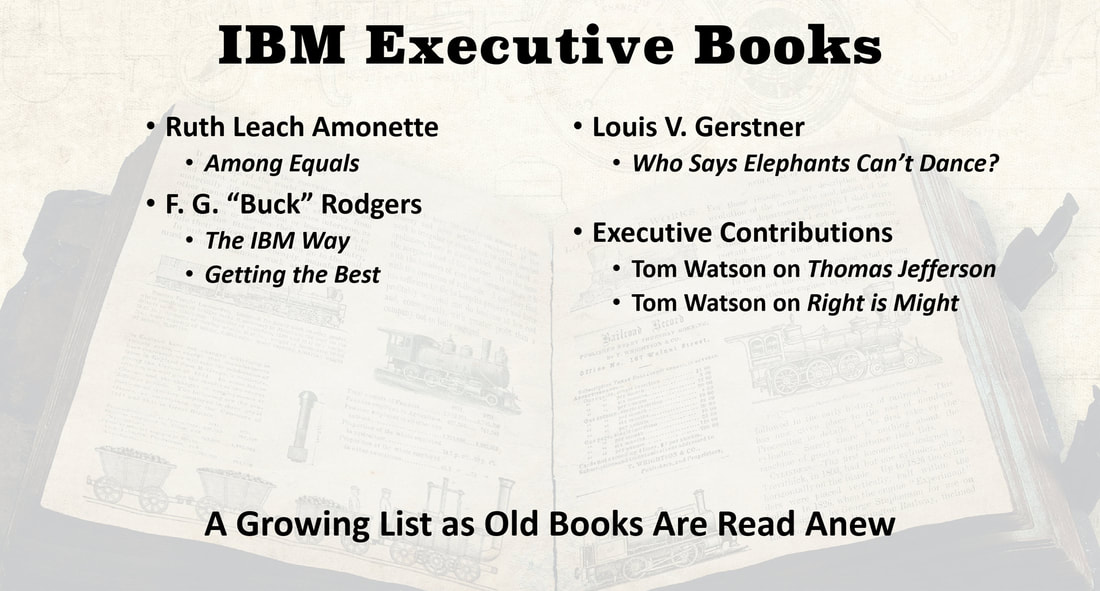 When all the powers of the executive's office would seem to ensure a limitless view, it must be hard for an executive to accept that his or her perspective may be obscured.  She has the authority, the access, and the ability to gather information simply by commenting on her need for it. Junior executives, managers, staff and consultants line up before her for their moment in the sun.

But she must be ever on her guard, watching for advisers—sycophants--who say what is easy to hear rather than what needs to be heard, for counselors who place blame rather than accept it, for predecessors concerned with their legacy rather than the business, and for electronic surveys of employee thoughts that cannot replace hearing them in person.

​Otherwise she is riding in a fog.
IBM Executive Books for Research
Ruth Leach Amonette: Among Equals
"Will the women who have taken jobs because of the war continue in the labor force after the war? … Some will, but most will not. …There will be women who must support themselves and possibly dependents. This number may or may not supplant those who will leave industry for the home after the war.

"What I believe women want is not to keep those jobs but the freedom to keep them.

​"I almost said the 'right' to keep them."
"White Collar Girl," Ruth Mackay, The Chicago Tribune, February 23, 1944
After reading this book, the reader will know that Ruth Leach Amonette didn't always see eye-to-eye with Tom Watson Sr., but one does get the impression that the "old man" knew who he was getting when he initially hired her, observed her growth as an employee, and eventually promoted her into senior management.
To read Tom Watson's perspective after the war, scroll down to the end of an article on this website: [Women in the IBM Workplace]. It isn't a complete perspective yet, but will provide some background on why it took time for IBM to hire married women as readily as single women.
F. G. "Buck" Rodgers: The IBM Way
Louis V. Gerstner: Who Says Elephants Can't Dance?
Thomas J. Watson Sr.: On Thomas Jefferson
Thomas J. Watson Sr.: On the "Essence of Civilization"
Return to "IBM Books for research" home page