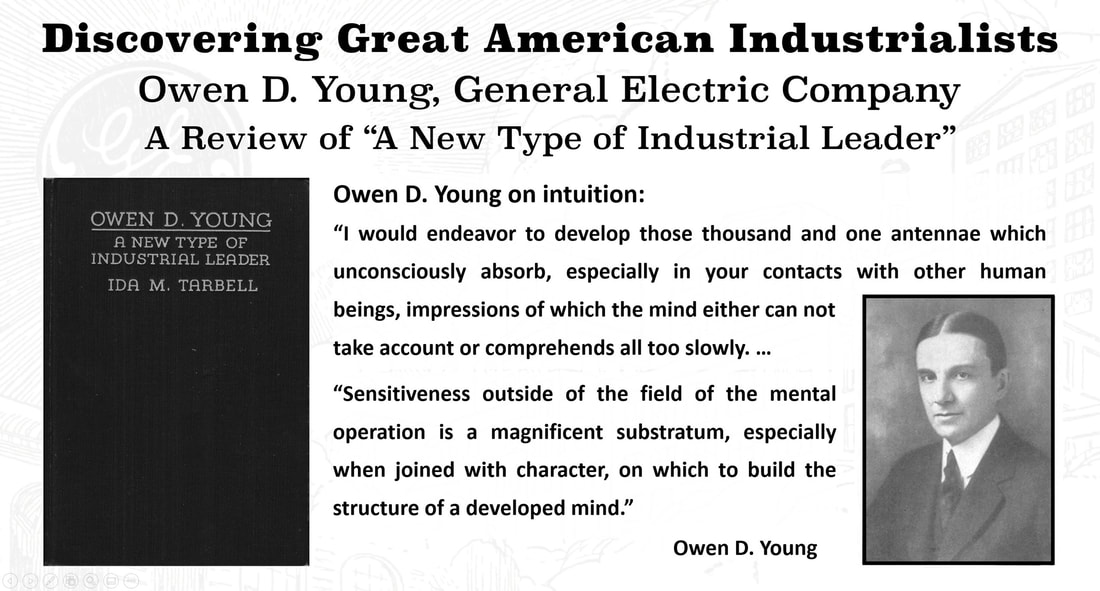 Ida M. Tarbell's prediction of being concerned for her reputation comes true after the printing of her book about Judge Gary in 1925: The Life of Elbert H. Gary: The Story of Steel. She writes that her "favorite paper" [The New York World] ran an article about her with the title of "The Taming of Ida M. Tarbell." Her frustrations with muckraking and all the negativity associated with the profession seem to shine through in the Foreword of this book about Owen D. Young, Chairman of the Board of General Electric as she writes:

"​I have never been one who felt that the praise of him you believe to be a good man is a shame to a writer, any more than I have felt the condemnation of a man you believe evil is a particular virtue in a writer. A biographer's business is to set down as faithfully as he can what he finds and that I have tried to do in writing this sketch."
I am glad she refused to be typecast in the role of muckraker. She was so much more! This is an amazing book about an amazing individual from corporate American history.

We need more 21st Century chief executives to read this book with humility and an open mind.

And more great journalists like Ida M. Tarbell.
​A Review of "Owen D. Young: A New Type of Industrial Leader" by Ida M. Tarbell
Reviews of the Day: 1932
It is not a political pamphlet. The man has not that brand of ambition. ... rather as the story of an American should it be read, an American who meets the increasing individual demands of American life with high courage, with a ready hand, with a gallantry incomparably fine and stimulating. A great piece of work.
I. G. M., New Books at Random, The Washington D.C. Evening Star, June 7, 1932
"He [Owen D. Young] has been most kind in answering my questions and has always left entirely to my discretion the use of what he has given me. He has never seen any part of the manuscript, and has always made it clear that he did not propose to have a hand in the writing of the book. ... The most I can claim is that, while I am an authorized biographer, I have not written an authorized biography!"
Ida M. Tarbell, Chicago Tribune interview, June 7, 1932
"It is disappointing because it comes from Miss Tarbell. It could have been so much better than it is. As a straight-away story of the man's life, to be sure, it leaves nothing to be desired. ... But something is lacking. ... a study of American life that is badly needed. ... This is just a campaign biography—an unusually good one, to be sure, but a campaign biography just the same.
Bruce Catton, A Book a Day, The Bristol New Bulletin, June 18, 1932
As a lawyer, industrialist, educator, or international diplomat, this book discloses a character and a career of which Americans may well feel proud that he is "one of us."
J. L. Hasbrouck, The Bloomington Pantagraph, August 21, 1932
Selected Quotes from "A New Type of Industrial Leader"
"We must first be men, then lawyers. Our duty is to use not to abuse the law."
"The law will yield up its reason to no man who lacks the patience to study its history."
"Gradually we are reducing the area of conflict between the two [capital and labor]. Slowly we are learning that low wages for labor do not necessarily mean high profits for capital. We are learning that an increasing wage level is wholly consistent with a diminishing commodity price level. We are learning that productivity of labor is not measured alone by the hours of work, nor even by the test of physical fatigue  in a particular job. What we need to deal with are not the limits to which men may go without physical exhaustion, but the limits within which they may work with zest and spirit and pride of accomplishment."
Owen D. Young Quotes from "A New Type of Industrial Leader"
This Author's Thoughts and Perceptions
I had never heard of Owen D. Young until I read this 1932 biography. Because of it, I have read his speeches and studied some of his other essays not included in this book. He was not only one of America's first and most recognized chief executives (General Electric) but he was also a great statesman and orator representing American interests internationally.
It was from this book that I drew some of the characteristics of what is needed in an international business leader of great stature for the concluding chapter in my book THINK Again. One characteristic a man or woman should endeavor to cultivate was this description, in which I believe Mr. Young very poetically describes something I would call "intuition":

"​Endeavor to develop those thousand and one antennae which unconsciously absorb, especially in your contacts with other human beings, impressions of which the mind either can not take account or comprehends all too slowly. Sensitiveness outside of the field of the mental operation is a magnificent substratum, especially when joined with character, on which to build the structure of a developed mind."

As I find with many books I read, one observation of Mr. Young's stands out in this book. It is the concept that a business should pay what he called a "cultural wage." Once again the papers of the time picked up the phrase and it became a topic of discussion both economically and politically.

​It is a discussion we as a country need to consider once again:

"We must aim to make the earning power of human beings so large as to supply them not only with a living wage, but a cultural wage. No man is free until want is removed from his door and until his intellect may be developed to take advantage of all the opportunities which may be available and are guaranteed to him in a free country."

Of course, these higher wages could only be paid with higher productivity achieved by great management investing capital from—capitalists, and maintaining high employee engagement. Capital and labor must work together—a common theme of Owen D. Young's writings and speeches.
​
Wise words from a great individual and, I believe, a true statement of what we are driving for in an "American Culture."