A Review of Andrew Carnegie's "An American Four-in-Hand" 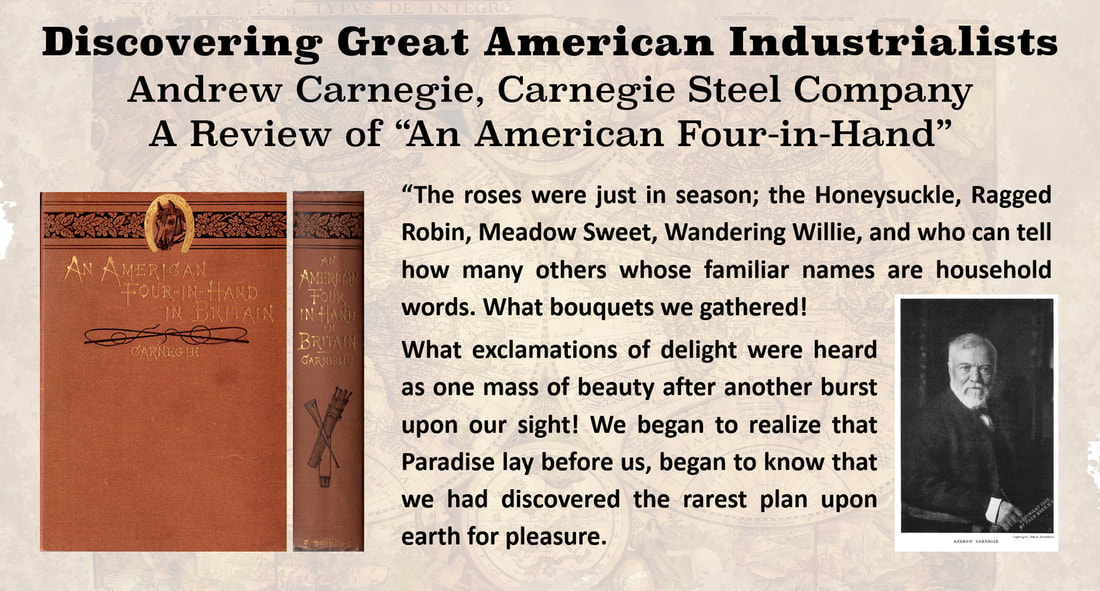 "We may all be very much surprised when we come to understand rightly, how very seldom the Unknown [God] requires any sacrifice of what is pleasing to us in this present world of His.

"​It seems to me it is not God but men who are disposed to make the path so very thorny."
Andrew Carnegie, An American Four-in-Hand in Britain
A Review of An American Four-in-Hand in Britain by Andrew Carnegie
Reviews of the Day: 1883–84
Andrew Carnegie originally printed this manuscript for private circulation among a few dear friends—those who were, as well as those who were not a part of the coaching party. A publishing house believed they could put it into wider circulation and it was then published with few modifications.
​
Amazingly there are a significant number of reviews. One witticism noted that instead of having four-in-hand in Britain, Mr. Andrew Carnegie … had millions-in-hand in America.
“The book is a brisk and entertaining volume throughout. The author is always alert, always good natured, and always in love with his dear old Scotia. … The style is spontaneous and agreeable. …

​"For a Scotchman, its perusal will be almost as good as a trip home to the old native land of Burns and Bruce and Bannockburn.”
The Wilmington Morning News, Literary Notes, June 4, 1883
Selected Quotes or Observations of Andrew Carnegie
Carnegie's belief in the American Republic
“Do you know why the American worships the starry banner with a more intense passion than even the Briton does his flag? I will tell you. It is because it is not the flag of a government which discriminates between her children, decreeing privilege to one and denying it to another, but the flag of the people which gives the same rights to all.”
Carnegie on temperance
“My plan for mastering the monster evil of intemperance is that our temperance societies, instead of pledging men never to taste alcoholic beverages, should be really temperance agencies and require their members to use them only at meals—never to drink wines or spirits without eating. … Why can't we recognize the fact that all races indulge in stimulants and will continue to do so?

“It is the regulation, not the eradication, of this appetite that is practical.”
Carnegie’s description of leaving England and rolling into Scotland
“The pretty had been left behind; the sublime was upon us. There was a nip in the air unfelt in the more genial climate of the South. The land over which brooded peace and quiet content had been left behind, that of the “mountain and the flood” was here,  whispering of its power, swaying us to and fro and bending us to its mysterious will. … that we may exult in the mysteries of the mountain and the glen.”
This Author’s Thoughts on An American Four-in-Hand in Britain
I read this book because I had read several others by Andrew Carnegie. I enjoy his Scottish “bluntness,” and his love of his adopted country—without sacrificing his love for his ancestral home. All that comes through in this diary turned book. Having said that, I would probably take this book with me if I ever traveled in Scotland. I would like to see if today’s tour guides know the information that is contained within this England-to-Scotland coach tour book.

This book was a fun diversion from the ordinary industrialists’ biographies I normally read. In one sad twist in the book, Andrew Carnegie dines with President Garfield a week before he and his companions sail for England. He recounts their conversation and writes of the President sharing the following verse while discussing a book President Garfield was reading:

“But come it soon or come it fast, it is but death that comes at last."

Sir Walter Scott
​While traveling in England they received news that the President was shot in an assassination attempt.

Cheers,
​
- Pete
The Four-in-Hand Itinerary through England and Scotland
​Below is the itinerary of Andrew Carnegie and his “Gay Charioteers.” (No, they did not have Google Maps in 1883.) He wrote the following upon their arrival at their destination, Inverness, Scotland:

“It was Saturday, August 3rd, exactly seven weeks and a day after leaving Brighton, when we entered Inverness and sat down in our parlor at the Caledonian Hotel.”