The United States Census of 1890

Tabulating Machines of the 1890 U.S. Census 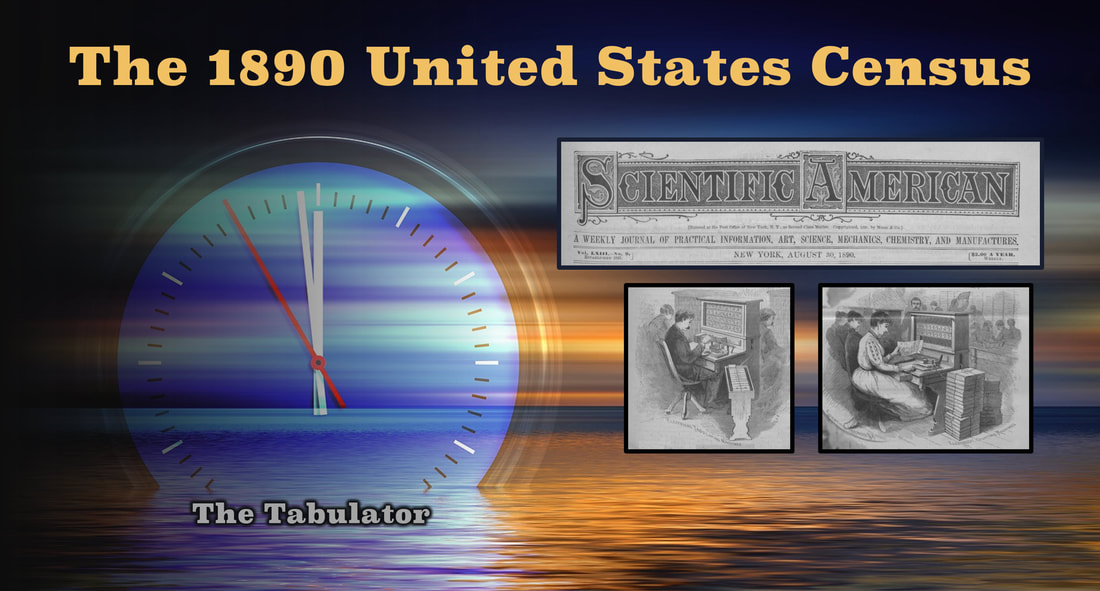 The United States Census of 1890 was the first usage of electrical tabulating machines on a large scale. It was a gamble by Herman Hollerith that worked. The following is the story of how the census was conducted as seen through the eyes of a writer for the Scientific American.

[If you use the material or images from this article - and you can because they are in the public domain, please add a link back to this web site and give credit to the author for taking the time to find the article in a local library, scan it in, make its images usable, and edit the material to make it available to the public.]

The heading and subheadings below were added by this author and are his sole responsibility.
​The United States Census of 1890

The Desire for More Detailed Information Has Grown the Size of the Census
Were this all that is required, the work would be completed now. But each schedule contains many particulars, as regards country of birth, age, health data, etc. Each of these headings again subdivides into a large number. Thus, under country of birth all the countries of the world are included, and under health there is a numerous list of diseases to be tabulated.

​This has led to a division of the office work as regard such particulars, and special tabulations are made for a number of classes.
Entering the Enumerators' Data from Across the Country in Electrical Counting Machines
The band on the odd dial moves forward 6 divisions, indicating that there are 6 individuals to be accounted for from the schedule in question. As each contact is made a bell rings. In this way the enumeration of families up to 20 members is conducted. The few families exceeding this are not provided for on the machine, and are so rare that they may, of course, be specially noted. Great dexterity is attained in the use of this machine.

​It is on this that many operators attain the speed of 50,000 names per day, and the entire count of the United States has now been twice executed on machines of this type, making a total of 64,000,000 of individuals each time.
Inputting the Census' Raw Individual Data onto Cards: The 1890's Data Input Device
The range and capacity of the machine may be realized from the fact that there are 240 of these apertures. A punch attached to a species of pantograph frame works above this plate. Back of the perforated plate is a place for the insertion of a card, and above the card and attached to the pantograph frame is a second punch. Thus connected to the frame, the second punch reproduces all the movements of the first punch in duplicate on a smaller scale and within the area of the card.

​When the first punch nearest the operator is forced down into any hole of the perforated plate, the punch over the card is forced down through the card, making a corresponding aperture. While it is perfectly obvious that 240 such apertures might be made on a single card, it is equally clear that this never could be required. Thus, a person would only be referred to one race, and only a single age number could be tabulated, the same holding for other data, so that as carried out about 18 or 20 perforations are made in each card.
​
On the upper corner of the cut will be seen the picture of a perforated card. A skilled operator can read off one of these cards as if it were a book. It tells him if the person referred to is white or black ; it tells the age, where born, if literate or illiterate, etc. But as this degree of skill is not to be expected from everyone, templates are provided in which the perforated card can be laid, and the results read through the apertures.

​In their regular use such reading is unnecessary: The cards are used for tabulating results automatically.
Transforming the Census' Raw Data into Useful Information
Thus, a single depression of the handle, the card being placed, causes its story to be transmitted in whole or in part to the case of dials seen facing the operator. It would be manifestly impracticable to make a single machine of sufficient capacity to include all the tabulations possible. It is here that the specializing system comes into play. A tabulating machine may be, and in practice is always, restricted by the omission of a portion of the contact points to a narrow range of subjects.

As in use at the census bureau, the machine has forty dials, and at most only forty data [points] can be provided for on each.

​A box divided into compartments may be noticed at the side of the operator [the picture above]. This has lids to its many compartments. which are opened by electricity. As the operator presses the handle, one of the electrical connections, it may be that referring to race or any other desired particular, causes a special compartment of the box to open for the reception of the card just tabulated. Thus, the cards are classified for transmission to succeeding machines.
The 1890 Census Combines the Power of Mechanical and Electrical Ingenuity
The work of this census is the first ever executed by electricity. In the mere enumeration in gross 15,000,000 schedules were twice gone over. The count proper began on July 1 and in six weeks the names were counted twice. The figure of 50,000 names per day was reached on one day by forty-three operators. One operator, a lady, reached the total of about 80,000 names. The female clerks averaged about 47,000 names, against 32,000 for the male clerks. The magnitude of the work may be inferred from the fact that some four thousand employees are engaged in tabulation results and executing the other operations of the census.

​It is estimated that the population or the world, if scheduled, could be counted by the United States census office in 200 days.
​
The early completion of the count was due to the improved appliances by which it was executed. The tabulation of results from the general and special schedules will be still more facilitated by the electric machinery. It lends itself to all modifications of data, and owing to it, it is hoped that the results will be reached and printed in half the time required for the last census. The apparatus was invented by Mr. Herman Hollerith, of Washington, D. C. To a mechanical and electrical inventor, the accuracy and early completion of the census work is in great part due, illustrating an interesting alliance of the abstract and concrete.
Scientific American, August 30, 1890
Return to the "IBM Twentieth Century Corporate Products" Home Page