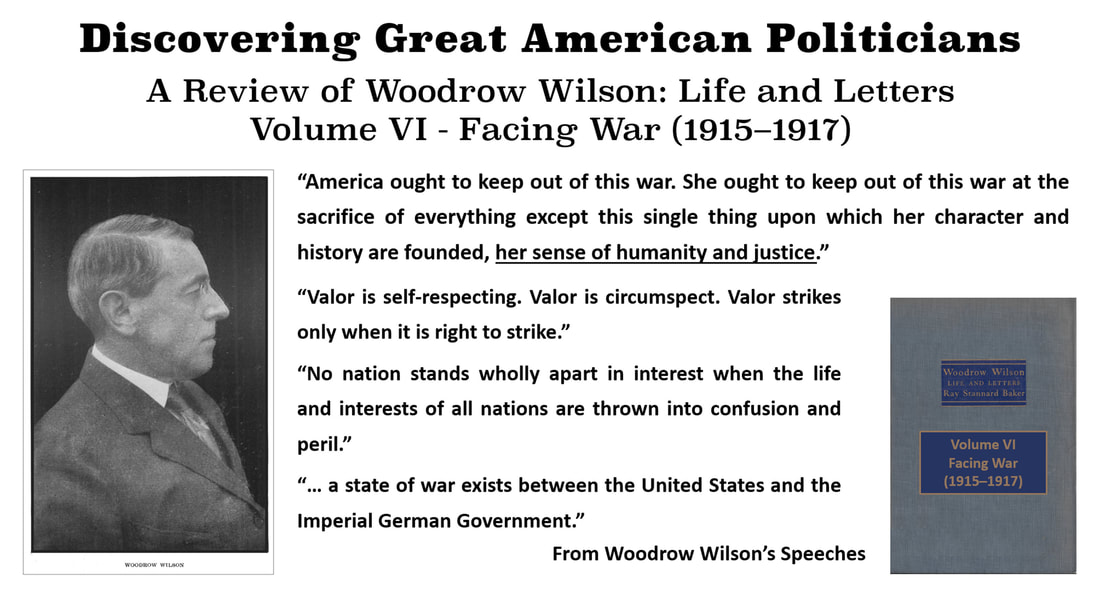 This volume was published in late 1937.
A Review of Volume VI: Facing War (1915-1917)
Volume IV: Woodrow Wilson: Life and Letters - Facing War (1915-1917)
“Study of Woodrow Wilson,” Sidney Williams, The Philadelphia Inquirer, November 13, 1937
This observation was from a review in England.
​“Mr. Baker is careful to show, he [Woodrow Wilson] was never a pacifist in the full sense of the term, and his ultimate entry into war was no inconsistency of principle. War was to him a dire last resort to be avoided at almost any cost, and the tragic interest of this volume lies in the gradual closing round him of the facts and forces which made the keeping out [of World War I] impossible.

“Two qualities of Woodrow Wilson stand out in strong relief apart from the idealist. … One was his immense power of popular appeal by an oratory peculiarly accommodated to the average man. It was … more of the poet and the prophet than of the politician. … The other factor was a deficiency in understanding the tactics of party politics and the character of politicians.

​"Mr. Baker’s story is full of surprises and misunderstandings on the part of his hero.”
​“Books of the Day,” J. A. Hobson, The Manchester Guardian, August 26, 1938
Wilson was willing to adapt … after careful thought and analysis.
“I would be ashamed if I had not learned something in 14 months [in the Presidency]. The minute I stop changing my mind with the change of all the circumstances of the world, I will be a back number.”
Woodrow Wilson, Nationwide “Swing-Around” Speeches
Personal attacks are nothing new in American politics.
“This feeling [about Wilson’s remarriage during the 1916 campaign] was fomented by one of the most despicable campaigns of secret slander ever known in American politics. Political enemies who dared not attack in the open used this vile means of besmirching the President's character.
​
“Lying innuendo regarding his relationships with his friend Mrs. Hulbert circulated everywhere: he was charged with inattention to the first Mrs. Wilson, and even with the neglect of her grave after her death!”
Wilson had his failings and obstacles
“It was Wilson’s lifelong error to suppose that men whom he accepted as his friends—he sorely needed intimate friends—not only loved him, but understood completely his clear and swift running mind, and agreed with him in all things.”
“He was likely, when a course seemed so utterly reasonable, to overestimate the capacity of men for understanding and prompt action.”
“He was repeating the old pattern of his campaign for educational reform at Princeton—he was beginning to drive [his initiatives] too hard and too fast.”
“The problem of the idealist in office [Woodrow Wilson], unlike the idealist at large [William Jennings Bryant], is forever one of method and of occasion. He [Wilson] cannot talk to the stars: he must work in harness. Every word is an act: every act a kind of destiny.”
A listing of Wilson’s successes.
​“Reform of business had been the first great step, and he [Wilson] proceeded from victory to victory—the Federal Reserve Act, the Underwood Tariff reform, the Federal Trade Commission, and the Clayton Anti-Trust Act. Protection of the rights of labour had been begun in the Sundry Civil bill, the Clayton Act, and the Seamen’s Act of March 1915.
​
“[He was pushing] to conserve the nation’s natural resources, and, more drastically, the relationships of capital and labor.”
So far, this quote of Woodrow Wilson from a Gridiron Dinner in 1916 seems to epitomize his leadership style. It is why he went “to the people” with so many of the issues of his day.

In a republic, though, a great president must work with his or her Congress.

The following quote also shows why Woodrow Wilson and the United States eventually ended up in World War I.

Although he was as much against war as any man, he finally came to grips with the necessity, and he rationalized it into his belief system as the war finally became about humanity and justice.

I was also quite impressed with how American’s sought peace. We are not a warlike people. The stories of the peace efforts of Jane Addams and Henry Ford (the latter of which, to this point, I have always seen as foolishness) are compelling and insightful. In particular, Baker writes of Henry Ford’s Peace Ship:

“There was, indeed, little to be expected of such an ill-organized adventure. It probably deserved much of the ridicule heaped upon it.
​
“Yet the fundamental concept behind the movement represented a large body of earnest, if naive, American opinion—that practical yet high-minded American citizens, by talking common sense to the European leaders and peoples, could get them to perceive the error of their ways and cease their bloody folly. … They brought to the task few qualifications besides good will; they were too confident that this was enough!”

Ray Stannard Baker
Of these peace movements, Mr. Baker summarizes them with this comment:

“Peace activities in general represented a tremendous weight of opinion, probably deepest seated in the West and South. Although in part emotional and ill-informed, the movement was sincere.”

Ray Stannard Baker​
This insight into Woodrow Wilson reminded me of the description used so often of Abraham Lincoln when he rose to speak on the most solemn of occasions and the most serious of topics:

“It was noted by those who had long known the President that when he rose to speak upon such an occasion his whole manner changed. His face became suddenly alive, his eyes glowed, and as he spoke his entire body, even his restrained gestures, seemed to register the intensity of his emotion.”

I would like to close with this wonderful passage that Ray Stannard Baker uses to describe how a leader—an orator—captures the imagination and soul of his or her followers. If we could only find such a man or woman again! But don’t we have to believe that God will deliver once again?
​
Baker describes the transformation of Woodrow Wilson when he stood to speak to the people. The script went out the window … he spoke from his heart.

“The inevitable happened, as it must happen, upon such an occasion, with any true orator. He must pour forth unreservedly what he has in his soul.

“No powerful effect is ever produced unless the personality becomes knit into an intense unity, seeking to deliver itself of convictions passionately held. He knew well, as he said, that “these are days that search men’s hearts”—he had been searching his own.
​
“He had been oppressed by the consciousness of the enormous power of the American people—and his own responsibility, as their President, for using it. It was a power that might easily carry us into the war: or, with restraint, it might conceivably bring peace to the suffering nations.”

This sixth volume—one of the mid-chapters in Baker’s legacy of Woodrow Wilson’s presidency—ends with a declaration of war. At the time, it was a war to end all wars. It was the driving hope of an idealist leader’s vision for a hopeful, idealistic country.

Wilson was now seeking—through war—a new world order. One in which “the rights of mankind and the rule of the people would be safeguarded.”

Another outstanding piece of research and writing by Mr. Ray Stannard Baker.