Sir Edward Beatty: "Seek a Crown of Laurel, Not Gold" 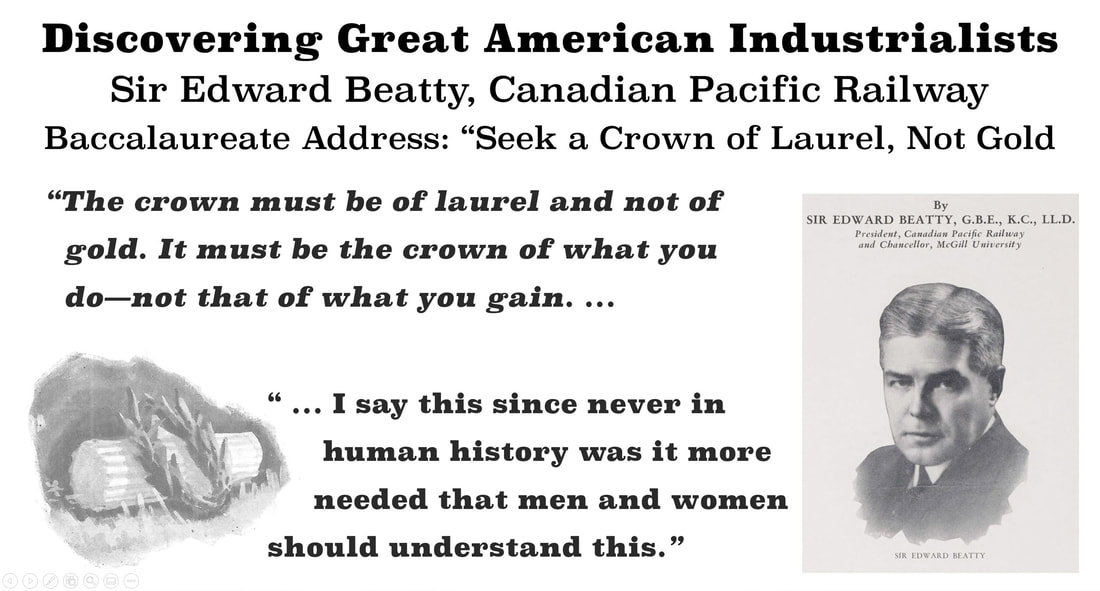 "What of the world now? ... When we are not preaching hate of nation for nation, we stir up hate of class for class. Because in the turmoil of war and postwar booms, men piled wealth on wealth; because in the crash of the world’s industry and commerce some were beggared and others not, we see the poor crying for the destruction of the power of the rich, and the rich proclaiming that revolution is upon us.

​"As between nations, so between classes—fear breeds hate. Hate makes war."
Sir Edward Beatty, 1935
This is as true today as almost nine decades ago. This is an amazing Baccalaureate Address.
McGill University's 1935 Baccalaureate Address by Sir Edward Beatty
Seek a Crown of Laurel, not Gold
"​Believe me when I say the crown must be of laurel and not of gold. It must be the crown of what you do—not that of what you gain. I say this since never in human history was it more needed that men and women should understand this."
My Generation's Defect of the Soul
"The world of which you are the heirs is one of bitter strife and turmoil.

"We—your elders—inherited a world of growing wealth. We carried on the task of widening its bounds. We spread our ploughed lands to the edge of the desert, and to the line where good soil ends in the rocky wilderness of the North.  We built railways from sea to sea. We linked the continents with ships. We destroyed the barrier of space to human speech. We split matter into its final fragments—even to the point where matter ceases to be matter and seems to be force. We opened the storehouse of knowledge to all. We broke down the bars of caste. We gave the plain man the luxury of ancient kings. We widened liberty and increased leisure.

"We risked all this in the hazard of war, and in a mad race for profit and pleasure. The war which ended the greatest period of human progress came from our failure to control our worship of the material by loftier standards.

"Do not tell me that it was no more than the outcome of German greed of conquest; of British imperialism; of French militarism; or of capitalistic lust of profits. Britain gave the world order and material civilization. Germany and France adorned the world with art and music, enriched it with science and with letters. The war profits of capitalists were an incident—not the cause of the war. We must look deeper.
​
"The madness that plunged the world in the bloodshed and horror of the Great War [World War I] was a defect of the soul—not of the mind."
Failing to Learn from Experience, We Stand Divided
"The wild boom of postwar days came from man's failure to learn the lesson of the war. We should have emerged from that appalling misery chastened in spirit. We did not. Victors could think only of turning their victory into wealth; vanquished, of how to avoid loss. Soldiers too often thought only of the years of  comfort and of profit which they had missed; civilians of how best to increase the wealth which the war seemed to have brought them. In the end greed resulted in  disaster.

"What of the world now? ... When we are not preaching hate of nation for nation, we stir up hate of class for class. Because in the turmoil of war and postwar booms, men piled wealth on wealth; because in the crash of the world’s industry and commerce some were beggared and others not, we see the poor crying for the destruction of the power of the rich, and the rich proclaiming that revolution is upon us. As between nations, so between classes—fear breeds hate. Hate makes war.

"An ancient adage has it that “If each before his own door sweeps, the village will be clean.” In these days of complex life, we are in danger of forgetting this. It may no longer be worth what it once was as a guide in our common life in things of the body and the mind; it still remains the only rule in matters of the soul: the conscience which guides a people is but the conscience of the men and women who make the nation."
Treat Others as You Would Your Family and Friends
"I do not need to tell you how to bear yourselves to those who immediately surround you—your family, your fellow workers. As civilized men and women you will know precisely what you should do. You must be wise but modest, sincere but tolerant, slow to anger and ready to serve. I have not to stress this law to you. You will apply it daily in your contacts with those who are closest to you, because it is the law which makes a civilized society possible.

​"Can you be the same to those less close?"
Wisely Temper the Emotions of Youth
"Just anger at wrongs easily seen must be controlled by wise tolerance if it is not to become mere madness. Be slow to anger. Be ready to believe the best. Be slow to condemn. Take the time to examine patiently the facts of the case and the arguments on both sides before you pass judgement. This world which you must set aright is an ancient organism growing slowly through the centuries. It is not perfect.
​
"Beware lest in trying to make it so you disturb the balances which make life possible."
​ Prove Your Education to the World
"Never in human history have young men and women entered life so trained and taught as you of 1935. Yours is a great responsibility. Weigh it well. The world which you now enter is one of clamor and of turmoil. Think well before you speak. Learn to limit eagerness with a sense of responsibility. The whole future of that great system of education and of training which we once held to be the finest of all human achievements is at stake.
​
"Do you know that the world today, skeptical of almost all the things we once held sacred, is doubtful of the worth of education? Do you know that men say it has failed? That they cry that in all the stress of the time our universities have not given us the leadership which we need?"
​ Peace Will Not Be Found in Treaties and Laws
​"​Material and intellectual progress are as important to man today as they ever were. All that I am saying is that more is needed than progress in wealth and skill.
​
"If these are to make happiness, they must be governed by the soul as well as by the body and the mind."
​Sir Edward Beatty, McGill University's, 1935 Baccalaureate Address
Return to the Industrialist Bibliography Home Page