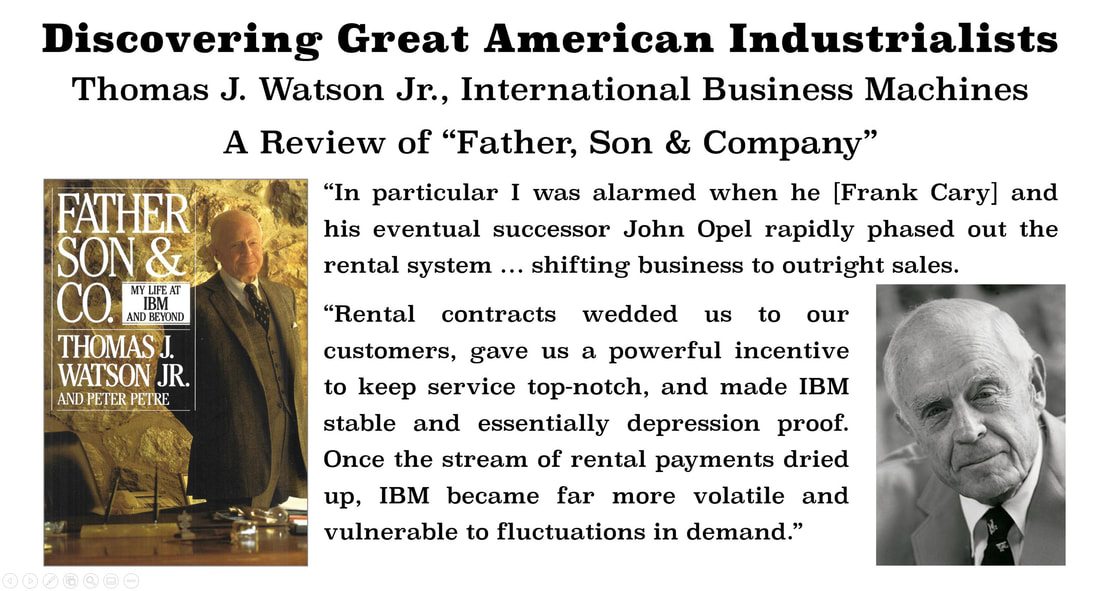 The Basic Beliefs of the father as perceived by his son:

"Dad [Watson Sr.] had followed [these philosophies] in managing the business for forty years:
Thomas J. Watson Jr., Father, Son & Company
Yep, to late 20th Century IBMers these were: Respect for the Individual, Service to the Customer, and the Pursuit of Excellence.
​A Review of "Father, Son & Co.: My Life at IBM and Beyond" by Tom Watson Jr.
Reviews of the Day: 1990
Editors note: In 1990, there were some 1000+ reviews (including syndicated reprints in multiple papers) of Father, Son & Company. Obviously, it was received and well reviewed and this short list doesn't do all of them justice.
Selected Quotes from "Father, Son & Company"
An insight into THINK Magazine
"​THINK was distributed to everybody who had an IBM machine. But it didn't stop there. The press run was close to one hundred thousand, and we only had thirty-five hundred customers. Dad had copies sent to anybody whose goodwill might possibly help IBM, including high school teachers and ministers and rabbis in the areas where we did business, all college presidents, and all members of the House of Representatives and the Senate."
On Frank Cary's handling of the economic problems of the '70s
​"Are you sure you need all this? Have you gotten competitive bids? We don't want these factories to be lavish, you know." The rebuilding [of plants] took six years and ended up costing over ten billion dollars, but it enabled IBM to stave off Japan, which today controls a smaller fraction of the computer market than it otherwise would have.
On the problems of the lease-to-purchase initiative that set up the company for the 1992 fall
"I was alarmed when he [Frank Cary] and his eventual successor John Opel rapidly phased out the rental system, shifting billions of dollars worth of business to outright sales. They did this partly because the life span of the machines had gotten quite short and partly to free up capital that would otherwise have been tied up in rental machines. But it bothered me because rentals traditionally had been crucial to IBM's success."
Editor's note: Pete writes about how this process enabled John R. Opel to set an expectation of a $100 billion IBM by 1990 and $180 billion IBM by 1994 in his book, THINK Again!
This Author's Thoughts and Perceptions
Father, Son & Co. is an amazing book written by Thomas J. Watson Jr. It is amazing because it reflects his humanity.

​At times you will wince to think that you might write some of what he did about his relationships with his father, brother and family in general. As I talk to more and more IBMers that knew Watson Jr., this just seems typical.

He, like his, father practiced management by wandering around (MBWA). He talked to everyone like he was one of them. He was anything but aloof. The obligations and associated strains of running a large corporation--for a person that cares—​comes through loud and clear in this book.