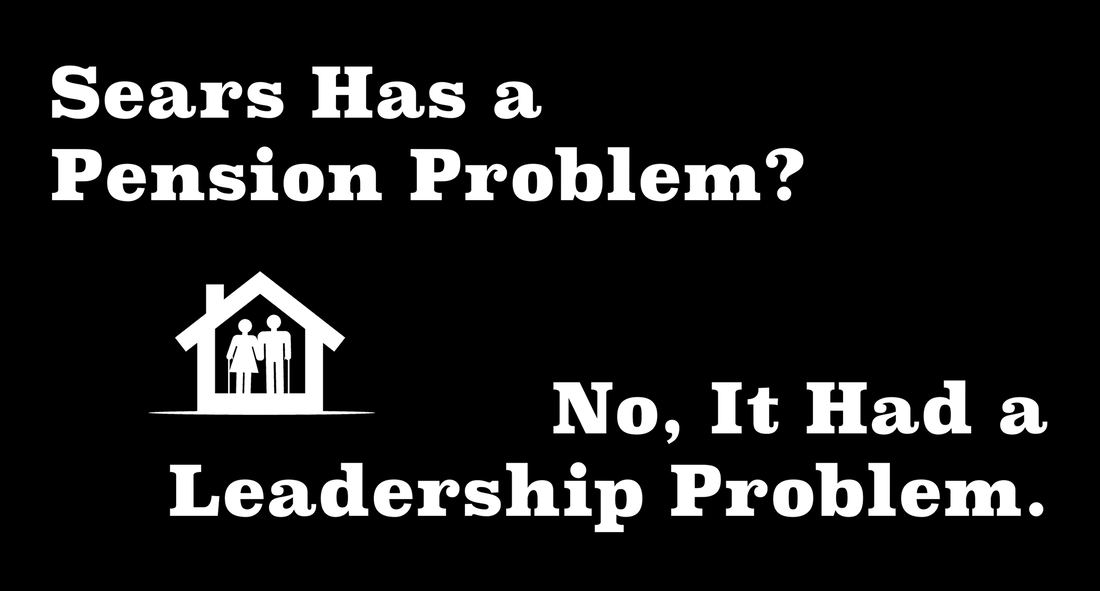 Eddie Lampert at Sears initially pulled a Louis V. Gerstner: Blame your problems on someone or something else and while everyone inside the company knows exactly what is going on, make yourself look like a hero outside the company. Lampert then pulled a Virginia M. Rometty: Frame what you are doing as a "transformation" and keep asking for more time to turn the battleship--but abandon your ship and crew before it sinks.

One day the press or some "great" economist will figure out that 1 + 3 = 4, or that the human relations policies of Lampert + (Gerstner + Palmisano + Rometty) equals eventual bankruptcy of once-great corporations.

​When U. S. businessmen and -women do wake up, our country can get back on track.

But it won't include Sears . . . or possibly IBM.
Sears: A Dead Franchise Walking
The Chief Executive’s Perspective on Sears’ Problem
The value systems of a Gerald Swope and Owen D. Young of General Electric, Thomas J. Watson Sr. of IBM, Dorothy Shaver of Lord & Taylor, and, yes, Julius Rosenwald of Sears, Roebuck and Company, are unknown to too many of our modern-day chief executives.
​
Too many executives have a myopic focus on money-first, and their perspectives have displaced, within the great corporation’s they now own, their predecessors’ focus on business-first: invest in making people more productive, processes more effective, and products more valuable, not stocks.

Sears, like IBM, built its brand on this business-first strategy.
The Making of a Brand Called Sears
Fifty years ago, I asked my father why we always went to Sears and Roebuck for most anything two males needed around the house: lawn mowers, hand tools and table saws, washers, dryers and refrigerators.

“Son,” he said, “I am a lifelong Sears customer because of their concern to do the right thing. I live my life that way, and I like doing business with stores that exhibit the same in their policies. ‘We’ understand each other.”

He continued, “When I was building our house, I had Sears install our fence. As the installer was packing to leave, I walked its perimeter and noticed a few problems. Well, he wouldn’t fix the issues and insisted on payment. I thought, ‘Well, it is good enough, but I am not really pleased.’ So, when I wrote out the check, I wrote on the back of it, ‘I am not a satisfied Sears customer. I write this check under protest.’ ”

Dad chuckled a little. “I guess I was a little ornery, but it was quickly forgotten. I never expected anything to happen. I would fix the problems myself. After all, it was ‘good enough.’ “

“A few days later, the local Sears manager called and, after introducing himself, only asked me one question, ‘When can I get someone out to your house to fix that fence of ours. Until you are completely satisfied ... it is still our fence. We are holding your check until you feel comfortable writing us another one as a satisfied Sears customer.’ ”
I found that it was no longer my father’s Sears.
Kmart Policies Destroy the Sears’ Brand
Back then, I traveled for a living and bought a vacuum before leaving on one of my trips. When I returned I unpacked it and like my father, who was long since gone, I found a few problems with the purchase. It worked, but I just didn’t feel like I was getting my money’s worth. I took it back to the store to return or exchange it.

An ol’ fart like myself was working and I told him what had happened. He said flat out, “We have been having a lot of problems with that model, you might consider another model or brand. Let’s take a look.”

We talked vacuums and – as ol’ farts do – we talked about our beloved companies: Sears, Roebuck and Company, and IBM—two of America’s greatest iconic brands. We talked about customer service and employee loyalty. He explained that if I had brought the vacuum in to one of the new “Kmart-trained kids” they would not have accepted it: thirty-one days was one day too long. They were now constrained by a straight-jacket system of laws and regulations, not empowered by guidelines built on a foundation of customer service.

Now, Kenmore is nevermore; Craftsman is less used by men of true craft, and DieHard instead of carrying a charge, over charges. After several tries, I too have come to know Sears: it is not my father’s store of first choice. Sears is Kmart in disguise – a warehouse of stuff and poor service I don’t want or need. It is a store I walk through to reach better, more customer-oriented businesses in our local mall.
Sears’ Problem Isn’t a Pension Problem
The men and women that are drawing pensions earned those pensions long ago. This was a generation of workers who, with their executives, drove ever-higher levels of productivity and customer satisfaction. They delivered higher margins which were then distributed between customers through better products and higher service standards, employees through better working conditions, wages and pensions, and shareholders through consistent dividends. This is not the chosen path of enough of our current crop of chief executives. Their focus is not on driving sustainable sales or profit productivity through an equitable distribution of profits, but through quarterly earnings and stock repurchases: it is the share-repurchase tail wagging the worker-dogs at the loss of customer loyalty.

Today’s chief executives won’t find their true problem - or their solutions -  in this quarter’s corporate balance sheet. They won’t find it in share repurchases; but, with a little management by wandering around, these executives could find the solutions in the suggestions of their employees and customers. Sears, apparently, has a problem like IBM: a leader who waves her hands in the air and complicates transformations. They both fail to realize that transformations take people – their greatest asset in changing a corporation. It is engaged, passionate and enthusiastic employees—not technology—who make transformations possible.

Will long-term-thinking analysts please help our chief executives understand that transformations start first and foremost with productivity improvements that arise naturally through employees who are enthusiastic, engaged and passionate about their work?

The problems of today are not rooted in the pensions of the past. Those were earned.

The stock ideology of today is the problem.
Return to business articles Home Page