A Review of A. B. Farquhar's "The First Million the Hardest" 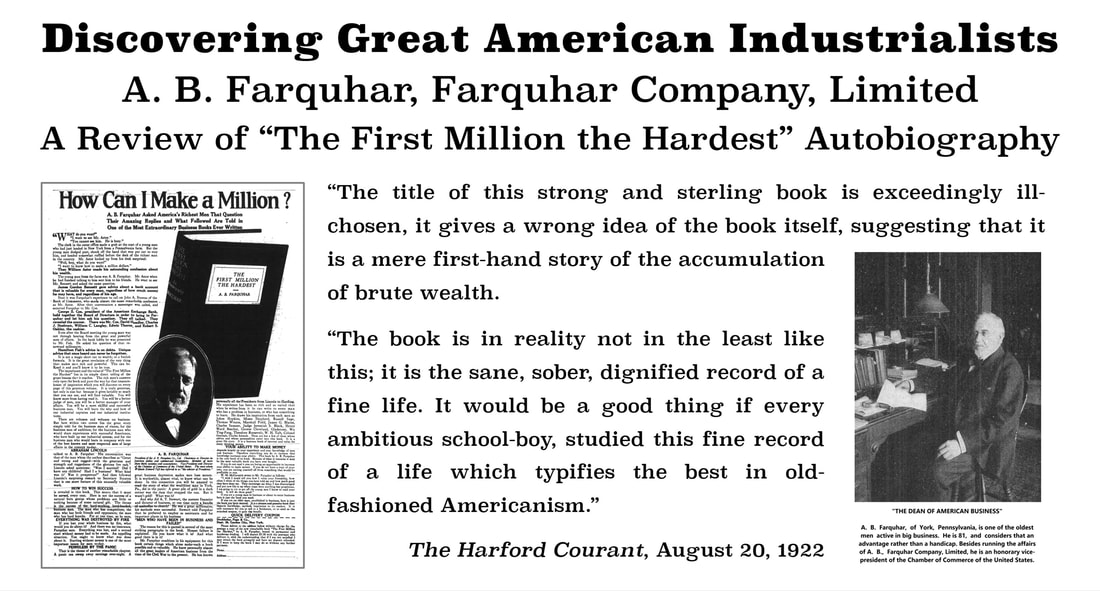 This biography of A. B. Farquhar was published in 1922 and is sometimes entitled The First Million the Hardest. It was an absolute pleasure to read. Again I have to start a review with the statement that this was an industrialist of the early 20th Century that I had never read about.

​An industrialist, though, that put his farm equipment on the land of possibly every farmer in the northeast of the time.
​A Review of "The First Million the Hardest" by A. B. Farquhar with Samuel Crowther
"The title of this strong and sterling book is exceedingly ill-chosen, it gives a wrong idea of the book itself, suggesting that it is a mere first-hand story of the accumulation of brute wealth, money, dollars, hard cash.

​"The book is in reality not in the least like this; it is the sane, sober, dignified record of a fine life. … It would be a good thing if every ambitious school-boy, whose ideal of "success" is the bare, rapid accumulation of money, should study this fine record of a life which typifies the best in old-fashioned Americanism."
The Harford Courant, August 20, 1922
Selected Quotes/Stories from "The First Million the Hardest"​​
​Some of the best quotes are in stories that Mr. Farquhar shares about his peers and political acquaintances:

His description of Abraham Lincoln is wonderful
"Exactly at half past four the President came out. Since I had seen him at his first inauguration his face had grown sadder but his eye even more kindly. And he had taken on a kind of simple majestic dignity that seemed more of the soul than of person—a dignity and a majesty that one felt rather than saw.

​"No painting, no statue, no attempt at re-creation of him on the stage, has ever given even a suggestion of this surrounding quality, of this atmosphere that came from him and lifted him away from the rut of ordinary mortals."
A. B. Farquhar, The First Million the Hardest
This Author's Thoughts and Perceptions
​The selection below of farm implements from one of Farquhar's catalogs seems to make this point.