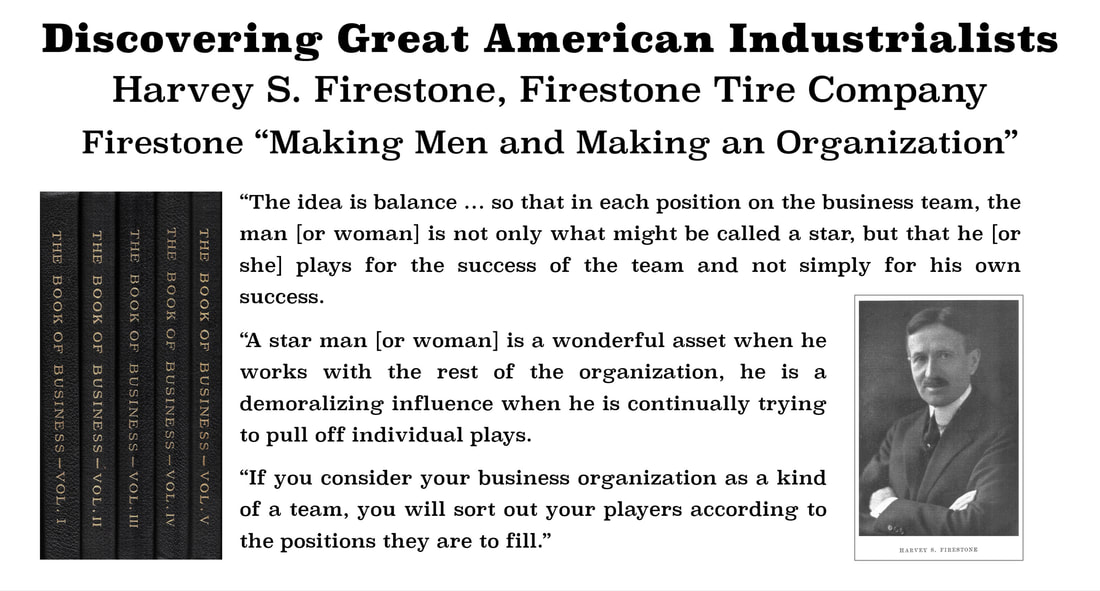 "A realization of personal imperfection may be the first thought to bear in mind in organization making, for it is not well to forget that the component parts of a human organization are human. They are not and never can be quite perfect. The unattainability of perfection does not mean it should not be eagerly pursued—that one should be easily satisfied.

​"There should be no lack of striving toward perfection, but the humanness of human beings is not to be forgotten."
​Harvey S. Firestone, "Making Men and Making an Organization," 1920
Harvey S. Firestone: "On Hiring Employees to Build an Organization"
​In the same way questions concerning school and high school, when he left and what he did, are all of use as indicating the attitude toward learning and as an exposition of his power of reason and analysis.
​
When I am through, I have a very fair estimate of the applicant's energy, persistence, straightforwardness, and ambition—which are after all the fundamental qualities. I want to see how he acts with me, whether he watches me suspiciously or whether he watches me in order to try to estimate what I am thinking about. It is very bad for a man to be eternally suspicious, but it is very good for him to keep close watch on what the other man is doing so that he may take advantage of openings.

In the first case the man is distrustful; in the second case he is making a study of the work before him, which work is selling himself.

​There are a lot of other things that can be brought out in this personal examination—the use of the eyes, for instance. It is extremely awkward to have a man looking you straight in the eye all the time in spite of what the copy books say to the contrary.

It is the expression with which he looks rather than the amount that he looks that counts.

Then there are nervous affections. A man being discussed for his first job should, I think, be nervous, but there is a deal of difference again between the nervousness of energy and the ordinary kind of irritated nervousness. Constructive nervous energy is the most vital of assets, but then there is the nervous energy which wastes itself in jumping from one foot to the other. A man with that kind of energy is a nuisance anywhere.

​But summarizing, my decision depends upon the impression that the man makes on us—the way he sells himself. They do not all have to make the same kind of an impression, because there are a considerable number of varieties of very good men.
​The idea is to balance so that in each position on the business team the man is not only what might be called a star, but that he plays for the success of the team and not simply for his own success. A star man is a wonderful asset when he works with the rest of the organization, he is a demoralizing influence when he is continually trying to pull off individual plays.
​
A business organization made up of second-class men all working together will be more effective than one made up of stars who work only for themselves. If you consider your business organization as a kind of a team, you will sort out your players according to the positions they are to fill. ​
Return to the Industrialist Bibliography Home Page