Review of "Selected Addresses of Young and Swope" 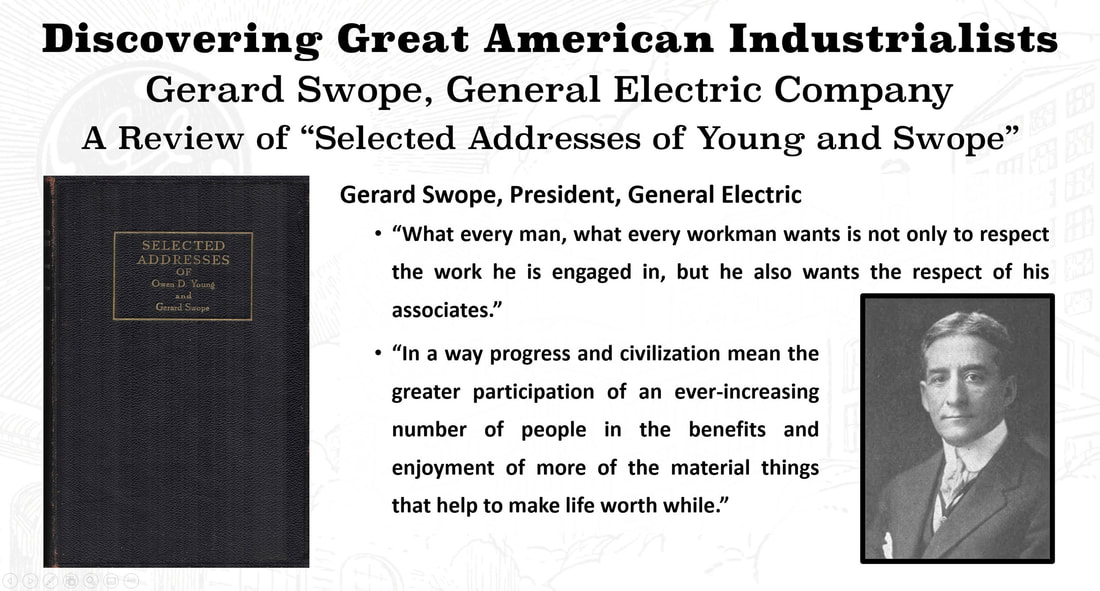 These are selected verbal and written communications from Gerard Swope to his customers, employees, shareholders, and industry peers from 1920 to 1929. The main focus of this review is on Gerard Swope's ideas and ideals. So, who were Gerard Swope and Owen D. Young?

Here is the setting that brought them into power at G.E.

“Corporations have no souls, but they are well equipped with nerves, and on May 16, 1922, those of the General Electric Company were quivering like the strings of Paderewski’s piano. … General Electric was getting a new chief executive for the first time in its thirty-year history, and a stranger to most of its men. They fretted impotently, worrying about what he might do to them and their jobs. …

“A dozen of the fifteen distinguished bankers and businessmen who composed the Board of Directors were concerned less with nerves than figures. These showed that their business had shrunk almost half in less than two years. … The man they elected president, Gerard Swope, … was virtually unknown to the public, but he had a reputation in the electrical industry itself for knowing more about it than any man on earth. …

“The new chairman of the Board who had been elected with him, was Owen D. Young. “One of us will be the captain and the other navigator,” was the way Young put it. … [within the walls of the] General Electric offices it was said that he [Owen D. Young] was “Mr. Outside” and Swope “Mr. Inside.”
David Loth, Swope of G.E.
Gerard Swope was the man who worked inside General Electric.
​A Review of Gerard Swope's Thoughts from "Selected Addresses"
This Author's Thoughts and Perceptions
The Words of Gerard Swope in Selected Addresses
Gerard Swope, Owen D. Young, Thomas J. Watson Sr. and IBM
Gerard Swope, a graduate of MIT, and Watson Sr., who never attended college, were among the founding members of the Research Associates of the Massachusetts Institute of Technology. [See Footnote #1] They were both supporters of the United States joining the International Court of the League of Nations.

Owen D. Young and Watson Sr. both served at the Federal Reserve Bank of New York. Owen D. Young served as a Class B Director from 1923 to 1927 and a Class C Director from 1927 through 1940. Watson Sr. served with Mr. Young as a Class B Director from 1933 through 1940. During this time, Mr. Young was first the Deputy Chairman (1927–1938) and then Chairman of the Federal Reserve Bank (1938–1940).
Owen D. Young—General Electric’s “Mr. Outside”— probably knew Tom Watson on a working-for-humanity basis, better than most, as they served together over their lifetimes on several, varied organizations. During the Great Depression, they worked together on the Share the Work Movement and Citizens Family Welfare Committee. During World War II, they worked together on the Citizen’s Committee for the Army and Navy, and the Russian War Relief fund. They served together several times raising funds for the Cathedral of St. John in New York City. [See Footnote #2]

Mr. Young spoke at the Society of the Genesee event in 1934 and said of Tom Watson:

"This country boy whom you honor tonight is typical of many, and more successful than most. He has attacked the problems of life, and still attacks them, with verve, with persistence, with patience, with humor, with seriousness, undaunted and unafraid. … [he is] beloved by them who know him, respected by all, devoted to the public welfare, a gentleman not of the old school or the new, but one who can qualify in both."

All three of the above individuals, Swope, Young and Watson, were cited in 1935 by the Assistant Secretary of Commerce, Ernest G. Draper, as examples of “statesmanship in industry.”

This book with selected excerpts from Swope and Young (and two similar books by Thomas J. Watson Sr.) are windows into our economic past and show the nature of three chief executives who put mankind and country before themselves.
​
For those who care to read them, their scripta manent—their written words remain.

- Pete
[Footnote #1] Announced by Dr. Karl T. Compton, President of MIT, this was a select group of businesses that would provide financial support for important research. The organization was founded: (1) to stimulate research leadership among members of the faculty, (2) as a method of teaching students to apply their knowledge, and (3) to develop new discoveries with social benefits in industry, health, safety, standards of living and intellectual satisfaction.

[Footnote #2] The author has only completed the preliminary research in this area. There may be more financial, economic and political intersections between all three of these men.
Return to the Industrialist Bibliography Home Page