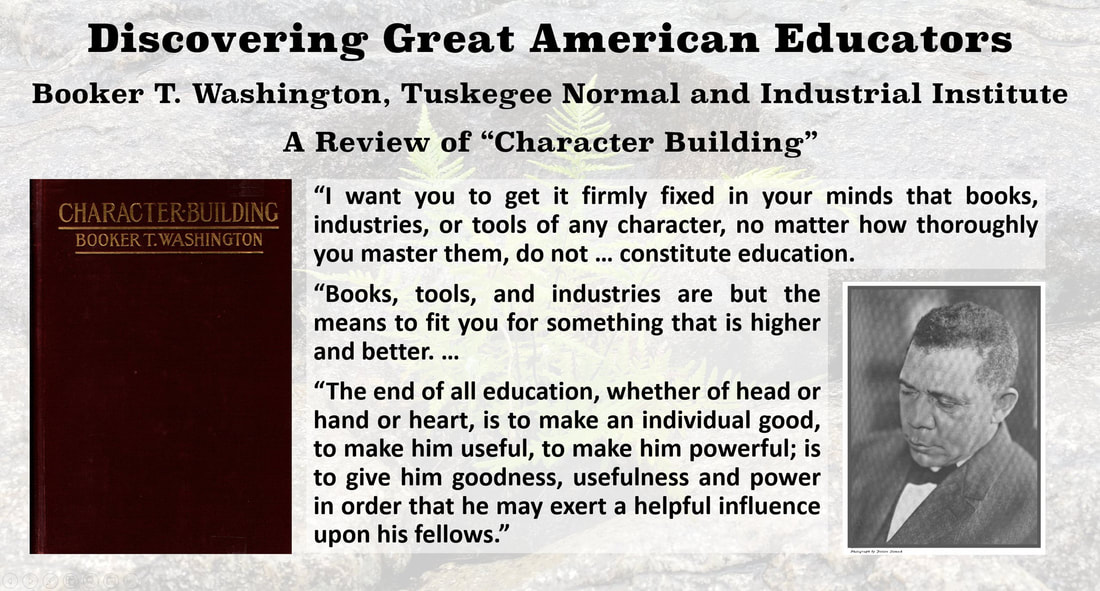 ​One Review from the Southern Press on Booker T. Washington's “Character Building”

“Many of this eminent negro leader’s friends think that the best literary work that he has done is the Sunday-Evening talks to the students of Tuskegee Institute, which he is in the habit of making when he is home. He throws into his work his whole moral nature, and many of these addresses rise to eloquence. They are all earnest and show the constructive quality of his mind. … There is plenty of good sense in the book, and admonition, that, if heeded, would place the black race above the white.
​
“Indeed, there is sound advice in it for the reading of white men as well as black.”
​The Richmond, Virginia Times, August 31, 1902
A Review of Booker T. Washington's "Character Building"
Reviews of the Day: August 1902
​“Mr. Washington throws into his work his whole moral nature. … It is a work of strong affirmative thought, and though specially designed to appeal to the negro, it will appeal with equal force to the general reader and deserves to be widely read. … In reading these talks one is impressed with their simplicity, their keen force, their tremendous truth.”
​The Nashville Tennessean, August 4, 1902
​“Booker T. Washington continues to be as resourceful as ever … We are no less favorably impressed with the practical and wholesome advice which he is giving to the negro students under his charge than we are with the splendid talents which he is so wisely using for the betterment of his race. … The temptation to quote from this book is almost irresistible … applicable not to blacks alone, but to every individual, whatever his race or color.
​The Atlanta Constitution, “Short Reviews of Latest New Books,” August 24, 1902
​"The position Booker T. Washington has attained as the leader of his race, and as deserving the respect and commendation of the world at large, has been due more than anything else to his sound common sense, and to his knowledge of the fitness of things. … no better insight into the principles he is trying to inculcate can be gained than from a reading of the volume “Character Building.”
​The Louisville Courier-Journal, July 5, 1902
Selected Insights into "Character Building"
“I think I am right in saying that the persons who accomplish most in this world, those to whom on account of their helpfulness the world looks most for service—those who are most useful in every way—are those who are constantly seeing and appreciating the bright side as well as the dark side of life. …

“Suppose that you see ... two persons eat their breakfast. Perhaps they will find out that the rolls are bad, but that the coffee is excellent. If the rolls are poor, it is a great deal better in such a case to get into the habit—a habit that you will find pays from every standpoint—of being able to forget how unpalatable they are,  and to let your thoughts dwell upon the good and satisfactory coffee.
​
“Call the attention of your nearest neighbor to the excellence of the coffee. What is the result of that kind of schooling? You will grow up to be an individual whom people would like to see coming near them—an individual to whom people will go for encouragement when the hours are dark, and when everything seems to be discouraging.”
This Author's Thoughts on Character Building
This book is a selected collection of Mr. Washington’s Sunday night “fireside chats” with the students at Tuskegee Normal and Industrial Institute. He wasn’t a master of the one-liner, but his audience was young men and women. He presented to his audience almost as a father or mother would to their children but with an educator type of role. Although the one-liners aren’t as prevalent in this book as many I have read; as one review states above, there are tremendous passages that present opportunities to “quote from this book.”

I found that after reading this book, I did not have so many individual passages marked as whole chapters. Mr. Washington had a theme for each of his chats. He established the theme, built a foundation, and then constructed a moral or spiritual code on top of each foundation. At times he may have wandered, but these were, after all, fireside chats. He must have been driven by the eyes and engagement of his students and driven by topics he may have just discussed that day. This book, more than any other to date in my collection, has whole chapters highlighted for a second reading. I will reread them when I find myself becoming discouraged with the state of race relations in my present time.

Here are the titles of those chapters:
​The chapter titles exemplify the basic themes Mr. Washington discussed with his students at the Tuskegee Institute: choices to be made in life, discouragement, education, the value of your word, playing an important part in the world, introspection, humility and more. ​As many of the reviews above pointed out, this book crosses ethnic boundaries. Many of the passages I would have gladly put in the hands of my children when they were younger to discuss the topics.

I read portions of this book as I get so frustrated with race relations in my own country.

Afterwards, I am refreshed and a better man for the reading of this book.