DISCERNING READERS
George Eastman’s enormous circle of friends and beneficiaries, if deprived of the chance to say "goodbye," did have their chance to say "thank you." 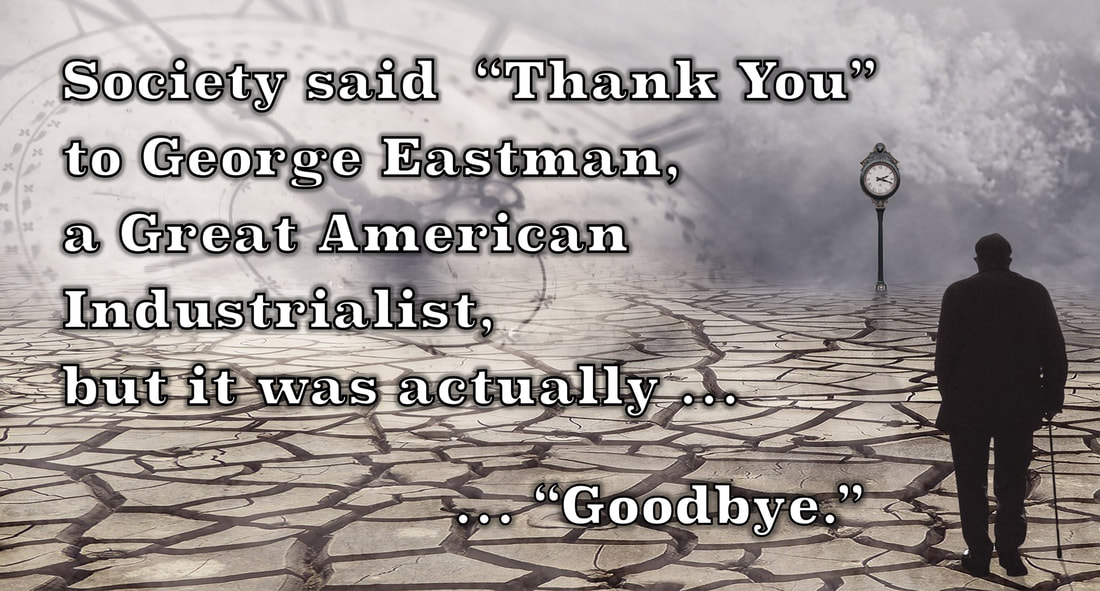 A Slice of Life Story: Thomas J. Watson Sr. and George Eastman
Introduction
Over seven years, $10,000,000 dollars (approximately $180 million in 2019 dollars) found its way to the Massachusetts Institute of Technology in the anonymous name of “Mr. Smith.” It was one of the best kept secrets of the early 20th Century. Mr. Smith was George Eastman. The United States of America has been blessed with some unique industrialists who built both the economic infrastructure and the supportive educational systems that raised the standard of living by raising wages and educational levels, reducing work hours, and producing products at ever lower prices with higher levels of quality and usability. Through this process they created whole new marketplaces for their products. In the case of George Eastman, he took the world from photography by professionals to mass photography—the beginning of the cameras and never ending “selfies” taken for granted today.

The following is a slice-of-life story about two industrialists, Tom Watson and George Eastman.
​Society of the Genesee Says "Thank You"
Carl W. Ackerman writes in George Eastman that the Eastman Kodak founder was frequently approached to receive awards and honors that would have focused public attention on him, but invariably Eastman “escaped” these offers. His typical reply was this response to the Society of the Genesee, whose membership included most of his long-time friends and business associates:

I deeply appreciate the honor, and deeply regret that it is wholly impossible for me to accept such an invitation. … I should be embarrassed beyond measure on such an occasion and do not feel that I could go through the ordeal.

George Eastman’s biography, published in March 1930, reflects this humble man’s aversion—not to public speaking—but to public recognition of his business success and philanthropic activities. Published two years before his death, there is an unwritten epilog to his relationship with his peers in the valley.

In April 1930, Tom Watson took over as president of the Genesee Society and "The World's Greatest Salesman" went to work. He wanted this great industrialist to receive the public recognition of his peers that he so richly deserved. The press documents that Watson made a personal trip to Rochester and “prevailed upon him [Mr. Eastman] to accept the honor” from the “twelve-hundred-member society.” In June, the Society announced George Eastman’s acceptance.

At the conclusion of the addresses and presentations, Mr. Eastman, visibly affected by the tributes, leaned over and spoke briefly to Mr. Watson. Then Mr. Watson turned to the diners and said, "Mr. Eastman has asked me to thank you all for all the honors he has received here tonight. He says that it is one of the greatest nights of his life [emphasis added]."

With the help of Tom Watson, George Eastman savored the gratitude of his closest friends. ​
​ The "Thank You" Was Actually "Goodbye"
If you have information, letters, communications, or personal experiences to share about IBM or Tom Watson Sr. contact us.