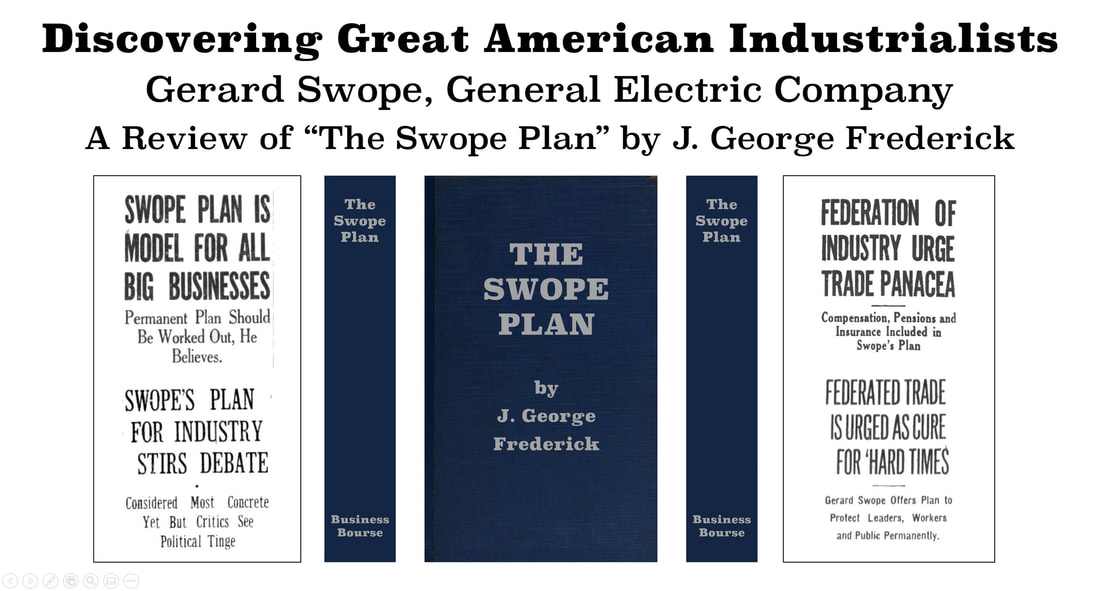 It took a tremendous amount of courage for Gerard Swope to wade into the economically and politically turbulent waters of the Great Depression in 1931, but he went at it with abandon. ​As president of the General Electric Company, he stood before a meeting of his peers at the National Electrical Manufacturer’s Association and put forth a plan—which would take on the moniker of “The Swope Plan”—a business plan to reorganize industries into trade associations.

He foresaw that these industry-specific associations would formulate trade practices, establish standard accounting practices, and work for stabilization of prices in cooperation with an appointed federal agency. He went even further and recommended that employees be given greater security through workmen’s compensation, life and disability insurance, old age pensions and unemployment insurance.

When "the plan" failed to be accepted by industry, he offered his ideas to an enthusiastic U.S. President: FDR.
​A Review of "The Swope Plan: Details, Criticisms, Analysis" by J. George Frederick
Reviews of the Day: 1931
​"Gerard Swope's plan to stabilize industry is the first constructive suggestion so far from the leaders of the school of practical economics. Coming from a man of his eminence and experience and endorsed as it is by some of the more important figures in the world of business, it is entitled to serious consideration.

"While placing industry or capitalism under a sort of guardianship that looms up as strange in our economic history, if it can secure the results that he claims for it, perhaps it may get this trial he urges."
Selected Quotes from "The Swope Plan: Details, Criticisms, Analysis"
Thoughts on the Swope Plan delivered from the depths of the Great Depression
"In the situation that confronts us at the present, the most disturbing aspect is that men who are able to work, who are competent workers, who above all things desire to work, cannot find work to do. … ​Industry exists basically for serving the needs of the people, and therefore production and consumption must be coordinated. Consumption is by the mass of the population, not the few, and the great mass of the population is made up of wage earners and their dependents."
Gerard Swope, The Swope Plan
"The psychology of fear must he removed, and this cannot he done unless they have reasonable expectation of protection  for their families in case of the breadwinner's death, protection for their old age, and protection against unemployment. By "protection" I do not mean a protection that is given to them, but I mean protection that they themselves help to provide."
Gerard Swope, The Swope Plan
" 'Panaceas' do not enthuse hard-bitten business men; we have had a great plenty of them in American life, and practical men realize that the constant tendency of naïve minds is to oversimplify all problems and apply doctrinaire ideas and arbitrary force."
Gerard Swope, The Swope Plan
"Our laws commit us and condemn us to an uncoordinated, unplanned, disorderly individualism which inevitably produces alternating  periods of boom and depression. Any serious attempt by a whole industry to substitute cooperative planning involves the risk of prosecution under the anti-trust laws. … This plan cannot be inaugurated without a radical change in the established industrial policy of the United States."
Walt Lippmann, Editorial, The New York Herald-Tribune
"It [the Swope Plan] sets forth detailed proposals for workmen's compensation, life and disability insurance, pension systems, and unemployment insurance. It provides specifically for the representation of labor at least in the administration of the funds for these various insurance proposals, and it hints - though more vaguely - that labor should he given a voice in the management of industry itself."
The Nation, Journal of Radical Economic Opinion
This Author's Thoughts and Perceptions
This plan positions Gerard Swope as a very forward-thinking industrialist. He opens the book writing that “the most disturbing aspect [of the current economic situation] is that men who are able to work, who are competent workers, who above all things desire to work, cannot find work.”

​It reminded me of the time I was talking to my father who had worked in a Civilian Conservation Corps (CCC) Camp in Wisconsin. We were talking about finding work and I commented in my positive, youthful ignorance, “There are always enough jobs for people that really want to work.” He looked away from me and said, “That wasn’t true during the depression. I hope you never experience it, like I did. It crushes a man’s spirit.”

Mr. Swope continues writing that the worker “must have not only adequate incomes but must be sufficiently assured of the future to feel that they are safe in spending their money. The psychology of fear must be removed, and this cannot he done unless they have reasonable expectation of protection for their families in case of the bread winner's death, protection for their old age, and protection against unemployment.” This plan reads like Roosevelt’s playbook to address the economic ills that were still very much in evidence in 1933 when he took office.

J. George Frederick does an excellent job presenting the varying opinions of the plan. From the businessman’s perspective he gathers the views of: the president of the National Association of Manufacturers, the president of the National Industrial Conference Board, Chairman of the Board of Westinghouse Electric and Manufacturing Company, and editorials from Business Week and the New York Herald-Tribune. It is a diverse group with divergent opinions. He then has chapters presenting the views of the critics and the trade associations. There are chapters addressing major concerns with the plan such as its constitutionality, anti-trust concerns, possible usurpation of oversight power by the government, martial law economics, and the effect of a five-day work week.

If you have time for nothing else, the final ten-page summary is worthy of a read. The following excerpt is an example of the writing and outlook of the author:

"It [the Swope Plan] falls definitely in the moderate class, and because of this it has infinitely better strategic opportunity of success. "Stand-pat" or conservative opinion is today almost as unpopular as the radical view; in fact, radical opinion has grown during the depression while conservative opinion has lost. This is what alarms many and has had the good effect of making moderates out of many stand-pat conservatives. The moderate or liberal point of view is now held by a great many millions.

"Thus Mr. Swope's Plan appeals to all temperate, practical minds as avoiding both repugnant radicalism and repellent stand-patism."
​
Today, we need to find that middle ground again in American politics and business life. Maybe as the extremes make life ever more repugnant and repellent, the American middle ground will find its voice and way to the voting booth.

Overall, an excellent, smooth and informative read. If the reader is interested in early American industrialists and their attempts to solve the economic problems of the 1930s, this is an excellent book.