Protecting the Borders of the Americas 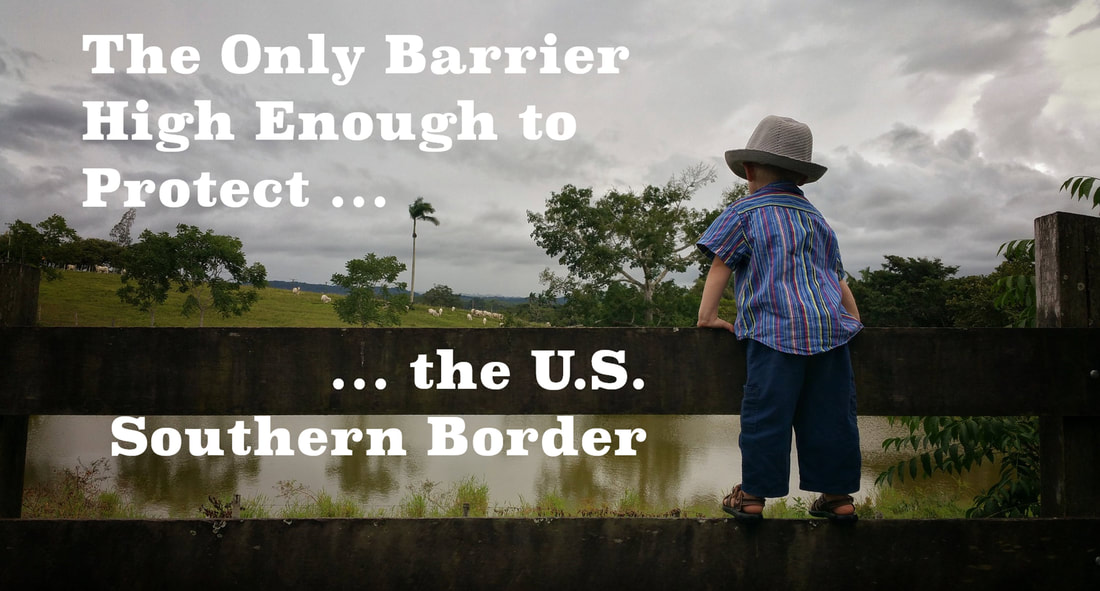 ​The United States of America is in a soul-searching predicament. Our debate over building a physical barrier along our southern border is exposing a long-term, inward-looking, identity crisis.

As a people, we must answer this question: What type of barrier along our southern border will symbolize our country? While a barrier against corruption, tyranny and evil is an absolute necessity, the type of barrier we construct will define us as a nation for generations to come. What do we want our grandchildren to see in their history books?

A southern border of concrete and steel standing in the path of a persecuted humanity?
There Is Only One Barrier High Enough
We Stood Against a Physical Wall that Divided Europe
I have great confidence that my fellow citizens of Texas and the United States will always strive to keep our laws—society’s rules of engagement between its citizens—based on the Golden Rule: treat others as you would like to be treated. But if the United States were to devolve into the conditions present in too many of our neighboring Central and South American countries, I believe that my countrymen would move their spouses and children out of harm’s way before picking up the fight against corruption and oppression. Could any wall stop us?

To protect our families, we would find a way over, around or underneath any obstacle. If a government of tyranny put up a physical wall to keep us in, we would find a way out. For our families, we would tear down any wall, brick by brick if necessary, even if it were designed by another country to keep us out. We are a country whose ideals dictate that we stand against physical walls to contain an oppressed humanity. How do I know this? Because I stood in Germany alongside many of my fellow citizens – draftee and volunteer – against such a wall.
Our current discussions exhibit a lack of creativity, wisdom and intuition in resolving the matter.
One Border that Has Stood the Test of Time
On September 2, 1941, Thomas J. Watson Sr. – a business man, not a politician – spoke at the International Day ceremonies of the Canadian National Exhibition. Looking out from Toronto he observed the mostly invisible boundary between the United States and Canada—still the longest border between any two countries in the world by almost a third. He called it what it was: a border without bayonets.

Every nation should strive for a similar border between their countries, but the question that has so far remained unanswered is how to build a protective barrier similar to this exemplary border-of-borders: a barrier that is invisible but socially tangible; a barrier that is impermeable and impenetrable yet socially acceptable? Our northern border stands in defiance of the two proposed solutions for our southern border: a visible, physically high deterrent or an inviting unobstructed path to a nation of stability from nations in chaos. There are those in our country who are reactionary. Ignoring the damage to our reputation, they propose a concrete and steel wall. Then there are the radical who, denying the possible effect on our own country’s stability, would accept anyone.

History suggests that such extreme thoughts take the U. S. majority to places they do not want to go, and it is only when the majority makes its stand through their representatives that such voices are exposed as extremist and in the minority. We have heard, many times in our democratic history, the voices of the reactionary and radical – in this case, the former propose actions that would trash the ideals of our country, and the latter propose irresponsible non-action with possible disastrous social consequences.

So maybe, we need to get back to that place where we have found some of our greatest leaders: progressive leaders who have the communication skills to project new, centrist ideas into an atmosphere of animosity. Leaders who communicate in a way that resonates with the calm, cognizant, and collective mindset that built this country and keeps it stable.

As it stands today, our representatives in government are arguing over non-solutions.
Rotate the Statue of Liberty 180°
The United States, the world’s last frontier has been long breached. There are no more expansive frontiers left on our planet. Man can no longer escape tyranny and exploitation by boarding a sailing ship, pushing further westward, crossing a mountain pass, or catching a caravan out of a country. The world has grown too small. John Kennedy started us on a solution when he told a new generation to, “Ask not what your country can do for you, ask what you can do for your country.” His solution to strengthen our country’s identity was the same as that for an individual who has lost his or her way: reach out, focus on helping others, and define yourself through the eyes of those you help.

Kennedy’s ideals, seen in institutions such as the Peace Corps, started a rotation of our Lady Liberty that we have failed to advance. We must continue her rotation because she is no longer beckoning the weak to our shores but is signaling to the strong to take what she has provided—her wealth, her idealism and her pragmatism—back to their ancestral homelands so that the tempest-tossed, huddled masses can breathe free … within their own borders and in their own beds.

She beckons us out of our isolationism.
​
So should our elected leaders.
The Need for Progressive Actions, not Reactionary or Revolutionary Ones
You have to guard against the reactionary mind that says, ‘it can’t be done’ and against the radical mind that says, ‘everything can be done.” Be progressive.
​Thomas J. Watson, IBM Tabulating Machine Class #305, January 1938
The only wall that is high enough to protect the southern border of the United States of America is a barrier of likeminded American States built upon the pragmatic foundations of freedom from want but, especially, freedom from fear. This will require not only a political but economic investment. Many will study this statement and will conclude that this will require us to become a nation of nation builders but, actually, something much less complex: a stabilizer of the societies within nations.

We succeeded in Europe with the Marshall Plan. The final evaluation of that effort? It has contributed mightily to our country’s and the world’s political and economic stability. Shouldn’t we seriously consider evolving this successful model to stabilize our closest neighbors? The United States must be a major contributor – both politically and economically – to the peace and stability of the Western Hemisphere. While doing so, we must continuously safeguard our own stability because, as we have seen over the last few years, a destabilized United States destabilizes the world. We must reach beyond ingratiating, myopic self-interest to an enlightened, self-interest. A self-interest tempered by a belief that every nation either directly or indirectly affects the well-being of its neighbors, and that it is in our best interests to invest in the stabilization of a neighboring nation to protect the stability of a hemisphere.

In the Americas, the only barrier high enough with a foundation deep enough to protect our mutual interests is a unified Western Hemisphere confronting oppression and tyranny to ensure that every American – north and south– lives first and foremost, free from fear. After that the peoples of each country can work out their own paths to achieve freedom from want so that they can practice freedom of speech and religion.

What kind of wall do I want my grandchildren to read about in their history books? A worldwide community of law-abiding countries where borders of concrete and steel aren’t needed because our peoples respect such boundaries. A hemisphere where freedom from fear makes crossing borders unnecessary – other than to enjoy the company of a fellow American.

Let’s not be afraid that we might make mistakes. That is inevitable.

Let’s move forward: looking outward not backward into isolation.
​
Let’s be progressive.
The Author’s Perspective
​Ida Tarbell, writing in Peacemakers in 1922, expressed this author’s perspective.
We [Americans] are of the world, and if we are to enjoy its fruits, we must bear our share of its burdens; that if we would have peace, the surest way is to use our strength and our good will to guarantee it.
I believe she purposely used the word strength and avoided the word power, because our country’s greatest strength is not in armaments and weapons of destruction but in strong human relations. These are relations that use high ideals as their cement reinforced with the steel and iron rebars of reciprocal good will. Our Lady Liberty has stood for more than a century calling others to a land that is not just the land of the free, but a land that confronts corruption and fear. Her light now expects us to reach out to this century’s travelers she once beckoned to our shores and bring an end to such journeys.

We must break the back of fear and corruption where it lives.
​
So, others can build greater freedoms for themselves.
Return to political articles Home Page