The Golden Rule of Business 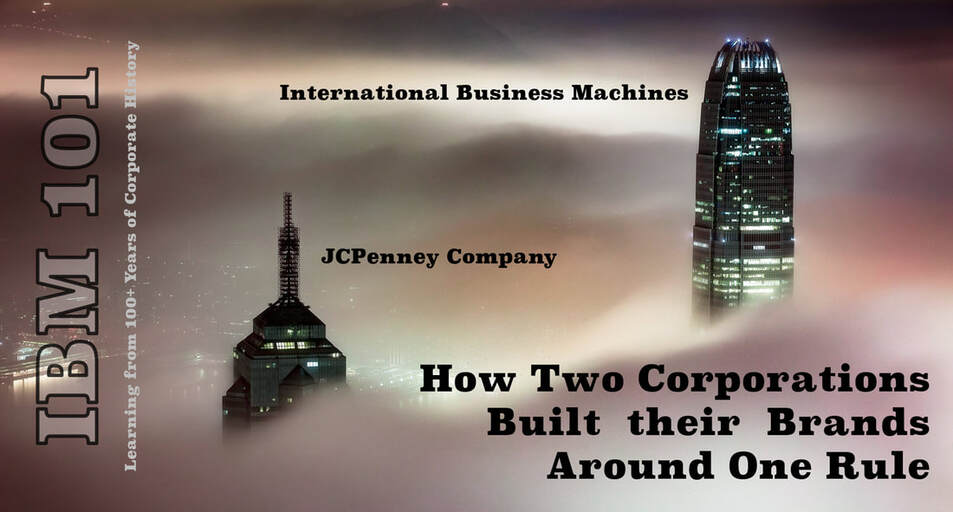 Two men—J. C. (James Cash) Penney and Thomas J. Watson Sr.—from uniquely different backgrounds founded two of the 20th Century’s greatest corporate brands. ​These two men seemed unlikely kindred spirits. Yet operating independent of, and unknown to each other until later in life, they built two unique business brands—one in retail and one in business machines—on the same belief system: treat customers, employees, shareholders and society the way you want to be treated.
How Two Corporations Built their 20th Century Brands
James Cash Penney
Thomas J. Watson Sr.
In 1914, Watson Sr restarted his economic life by traveling between the population hubs of the northeast. He had just been fired as NCR’s general manager, convicted of violating the Sherman Anti-Trust Act, become a father, and was now entrusted with leading a young, demoralized corporation that was deep in debt.

​From the outset he enforced his moral code of business conduct and finally, after a decade, changed the company’s name to match his aspirations—International Business Machines (IBM).
Applying the Golden Rule to Business
Two Businesses Based on a Common Belief System
​As the J. C. Penney Company grew, pictures proliferated of Penney with his customers and employees. And in the background of many—emblazoned on posters like Watson Sr.’s THINK—was “The Golden Rule.” In a personal memo, today darkened with age, Penney counseled a pastor on the fundamentals of human relationships.
“We need to have firm faiths, which can inspire and effectively guide us. As I see it, these needed faiths, broadly speaking, are three in number: first and foremost, a trust in God—in the power of His goodness, which is bound to be victorious; second, a full confidence in the golden rule—the fundamental ethical principle for human relations enunciated in various ways by eleven of the world’s major religions; and third, a reliance on the soundness of our American way of life—as expressed in the United States Constitution.”
J. C. Penney, July 1954, to an unnamed pastor
​​One gets the impression that he sent similar letters to many of the religious leaders of his day.

The golden rule also underpinned many of Watson Sr.’s writings. It was the major unifying philosophy in four articles he penned within two short years of each other: The Essence of Civilization, The Heart of Peace, Moral Law and Human Relations. In the last of these articles on human relationships he summed up the personal philosophy that permeated his business:
​“The simple rule to follow in all human relations is the Golden Rule. This rule applies to all human relations, great as well as small… The Golden Rule is a rule of justice between men and between nations.”
Thomas J. Watson Sr., Human Relations, Think Magazine August 1943
To Watson Sr., a thinking human being would sooner or later believe in human relationships based on the golden rule.
Similar Dreams of a Different Gold
A young fellow taking a breather during his lunch hour joined a crowd by the barriers surrounding a deep excavation. He leaned over and watched with lazy interest the workers below who were digging frantically in one corner. The conversation around him soon made it clear that there had been a cave-in, and a worker was trapped.

Suddenly, one of the diggers looked up, recognized the young man, and shouted: “Bob! It’s your brother Bill we’re digging out!” As you can imagine, Bob was immediately transformed from a nonchalant watcher to an eager volunteer. It was his brother in mortal danger and that made all the difference!

​Do you see why my friend Tom Watson thought and acted as he did? He recognized in all men, his brothers. That simple, yet profound, thought governed his life and work. This was the foundation for his fair dealing with customers, employees and associates.”  [See Footnote #1]

America’s future depends on leaders following the golden rule. This was a unique 20th Century friendship between two men of dissimilar backgrounds but shared environments who, late in life, discovered their common ground. Here were two businessmen, in two different industries that built two of the most recognizable brands of their century. Theirs was a friendship, two businesses and thousands of human relationships based on a single rule—a golden rule.
​
Even though this century’s corporate leadership faces different externals from those of T. J. Watson and J. C. Penney, the great corporations to come will arise from leaders—followed by those—with similar dreams of a different gold.
[Footnote #1] The entire tribute of J.C. Penney to Tom Watson can be read on this website: [here]. The copyright for this letter and James Cash Penney images are with the DeGolyer Library. Tracing Thomas J. Watson Sr.'s history is quite difficult since IBM has never made his personal papers available to the general public. It is like searching for the proverbial needle in a haystack to find information of the time and document communications between his close associates. One of his peers was J. C. Penney. Mr. Penney's papers are stored at the DeGolyer Library, SMU. Usage of these materials in part or in whole requires their permission. Nothing on this page may be used to any degree without their permission.
Return to Corporate 101 Articles Home Page