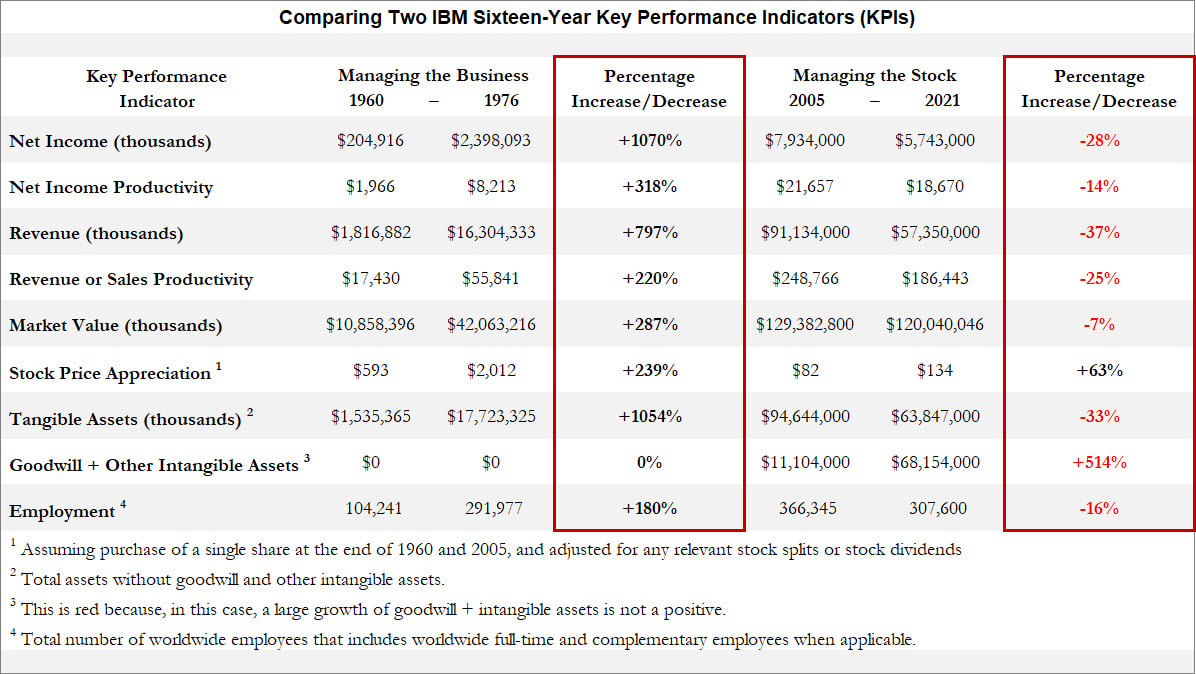 ​If you want me to come in here and operate this business for the benefit of the business, I'll do it, but I will not have anything to do with the operation of it from a stock standpoint.

​Thomas J. Watson Sr. to the C-T-R Board of Directors, 1914
​The Lengthening Shadow​
The Data Is Crystal Clear: The 21st Century IBM Has a Performance Problem​​
In the 20th Century, IBM made a sixteen-year transition that set it apart from and ahead of its competition for almost a half century [Read: The Greatest Business Gamble of the 20th Century]. Some analysts believe that IBM is in a similar transition in the 21st Century. Over the last sixteen years how have IBM's chief executive officers performed against some similar critical key performance indicators?

​IBM's performance from the period 2005 through 2021 was as follows (non-inflation adjusted): net income was down 28%, net income productivity was down 14%, revenues (sales) were down 37%, sales productivity was down 25%, market value was down 7%, stock price appreciation was up 63%, ​tangible assets were down 33%, and goodwill and intangible assets were up 514%, employment was ​down 16%. [See Footnote #1]

Of course, even with all the negative numbers this performance must be put within some sort of context to intelligently make sense of the numbers and answer the question, "How is IBM performing?"
​In the mid-’60s, Watson Jr. invested $5 billion or 12 times IBM's 1964 net income to deliver a product of superior value—the mainframe. During this time, Watson Jr. prioritized hiring and retaining the best people, building new worldwide communication processes, and pushing individuals to their inventive and innovative limits. In contrast, three chief executives of this century (Palmisano, Rometty and Krishna) prioritized investments in paper and outside acquisitions over investing in their people, processes and products. Over this sixteen-year period these chief executives invested $142 billion in their own stock—18 times ​IBM’s 2005 net income. [see Footnote #2]

​​Comparing the Results: Managing the Stock Instead of the Business
This requires that the chief executive officer and the board of directors acknowledge that IBM has never conducted a successful share repurchase/buyback program that has benefited its stakeholders, including shareholders [Read: IBM Case Study: Do Share Buybacks Work?].
​[Footnote #1] "Goodwill + Other Intangible Assets" is red because a large growth in this area is generally not seen as a positive since it is increasing shareholder risk.

[Footnote #2] Since the share buybacks started in 1995 under Louis V. Gerstner, IBM has spent $201 billion. For the time being (2020-21) the repurchases have been "suspended." There is still $2 billion authorized for share repurchases.

[Footnote #3] Arvind is not given a bye on this one because it is stated in the 2021 Annual Report that as of "December 31, 2021, $2,008 million of common stock repurchase authorization was available. … We suspended our share repurchase program at the time of the Red Hat acquisition closing … in order to reduce this debt and return to target leverage ratios within a couple of years."
REturn to IBM's 21st Century Corporate Performance