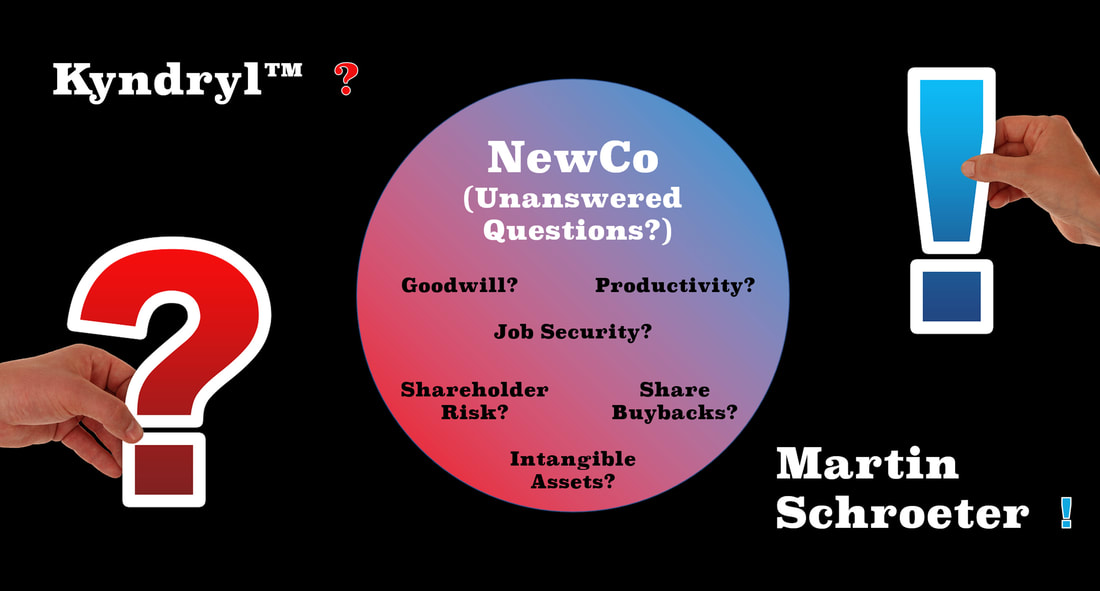 Customers who dedicate time, energy, and money to implement products; employees who exchange loyalty for rewarding careers; shareholders who invest for a long-term return; and societies that redistribute the tax dollars of all three to maintain legal systems, repair and improve infrastructures, and maintain social stability, which businesses need to optimize profits and operate in peace.

THINK Again! The Rometty Edition
​IBM in its press release announced that Martin Schroeter will run the Kyndryl (NewCo) organization. Arvind Krishna is quoted in the release as stating:

“Martin is a world-class leader and is uniquely qualified to drive the long-term success of the new, independent company. He has a deep understanding of the industry and has earned the trust of our clients and of the investor community.
​
“Martin has the strategic vision and business judgement to realize NewCo’s (Kyndryl's) enormous potential as the global leader in managed infrastructure services. He is an inspiring, results-driven executive and the right CEO to lead NewCo through the spin-off process and beyond.” ​

Unfortunately, Arvind’s words don’t line up with Mr. Schroeter’s track record—especially if you add employees to the mentioned list of “clients” and “investors.” Martin’s record is that of the financially-minded individual whose actions as IBM’s CFO seem to indicate that he has little understanding of what it takes to build, maintain and grow a sales organization. From the press release it is stated that Mr. Schroeter was IBM’s CFO from 2014 to 2017.
​
My perspective on the responsibility and need for a sales-driven corner office, not a financially-minded one, is related in this article: [The Importance of Sales Productivity].
Please note IBM’s profit productivity in the chart below from 2013 through 2017. During Martin’s tenure as IBM’s Chief Financial Officer, every single employee’s (400,000+) profit productivity fell from $35,540 to $14,462. Earnings per share meant discarding 70,000 employees in those years (470,085 to 409,670).

On the chart, it is noted that IBM hit a profit-productivity brick wall in 2013.

Was this Martin Schroeter?

Virginia M. (Ginni) Rometty was at war with her sales organization for most of her eight years in the corner office.

​The most public display of her treatment of the sales organization was captured in a footnote in "THINK Again! The Rometty Edition:"

“The most public and visible of these reprimands came in April 2013 when Rometty sent a video message to the company’s employees blaming the “sales staff” for failing to close important software and hardware deals. Unfortunately, her and her chief financial officer’s constant berating of sales continued unabated quarter to quarter and year over year throughout her tenure.

“It is hard to find any chief executive who has been successful over the long term while constantly at war with the individuals responsible for driving revenue for their corporation. This video and Rometty’s results are reminiscent of John Akers’ “water cooler” comment that escaped from one of his meetings.

“This [John Akers’] event is covered in Chapter 7: Executive Hubris Brings a Fall. Yes, there was too much hubris in the corner office this time around too.”

For the entire eight years, she led the corporation through a financial mindset. A major portion of that time (four of the eight years) her partner was Martin Schroeter. Appointing him as the Chief Executive Officer of Kyndryl (NewCo) will please the Wall Street investment community. This is a certainty because this is an individual who knows how to manage to short-term bottom line results as expressed in a single measurement: earnings per share.

Unfortunately, this is not a strategy that grows organizations through an engaged, passionate, enthusiastic, self-sustaining stakeholder community of employees, customers, long-term-minded shareholders, and their supportive societies.

Such a long-term strategy demands a Saleswoman- or Salesman-in-Chief.

It demands a man or woman who understands human nature.

IBM hasn’t had one of those in a long time.