Review of "Alexander Graham Bell: The Man Who Contracted Space" 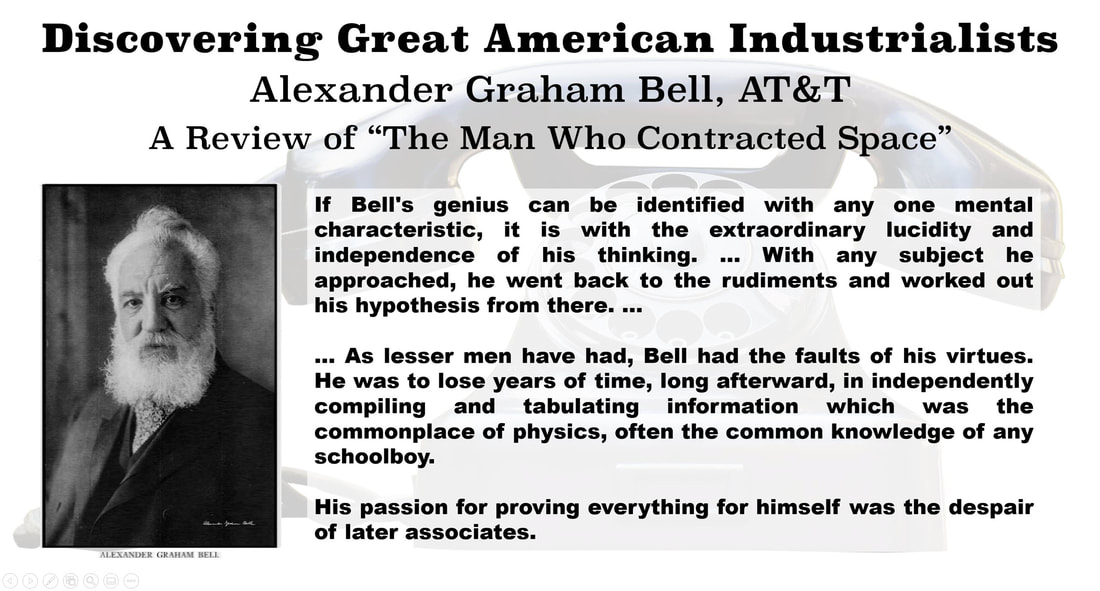 Genius as he was, Graham Bell was wholly incapable of applying any one of his own conceptions to a practical end. To Bell, the search for knowledge was the only really absorbing thing in the world. Goals were never as important to him as his progress toward them. His wife, always his closest companion, lamented that “he never wanted to finish anything,” and that “he would be tinkering with the telephone yet if I hadn’t taken it away from him.”
Catherine Mackenzie​, ​Alexander Graham Bell
A Review of "Alexander Graham Bell" by Catherine Mackenzie​
A Review of "Alexander Graham Bell: The Man Who Contracted Space"
Reviews of the Memoir When Published in 1928
“This is the first authoritative life of one of America’s greatest inventors, written by one who was closely associated with him during the last eight years of his life.

"Naturally, in the course of the long hours thus spent, Miss Mackenzie heard from his own lips many reminiscences of his long life and labors and multiple interests. Many of these she has used in writing his biography, in addition to the store of facts and incidents gleaned from the many volumes of Mr. Bell’s own typewritten record, which Miss Mackenzie had edited for him.

​There is every reason to believe that here is as authentic a biography as it is humanly possible to produce.”
​The Jacksonville Daily Journal, May 18, 1928
Some reviewers relished the detailed analysis that Miss Mackenzie gave to the long, tedious and bitter fights that Mr. Bell suffered over his patent rights. She proved what she declared openly in the book: “Probably no inventor ever lived who could and did show a clearer title to his invention.” There were ultimately close to 600 lawsuits, and in every instance the courts sustained Graham Bell as the original inventor. Five of these suits went to the Supreme Court and all five decisions ended in Bell’s favor. Unfortunately, the constant attention drawn to such a large number of lawsuits damaged Bell’s public reputation.

​His true character was rarely captured in print. Of this, Miss Mackenzie wrote:
​
"The search for truth was the one really important thing in Bell’s life. It is the irony of his story that the malicious charges of fraud, widespread against him during the long and determined effort to wrest the telephone from him, were in complete contradiction to everything essential in his character.

"Honest, courageous, scornful of double-dealing, the incontrovertible evidence of his prior invention, and his repeated vindication by the courts as 'an honest man with clean hands,' were for years unavailing to quell these charges.

"They have persisted, ghosts of their once lusty selves."
Catherine Mackenzie, ​Alexander Graham Bell
​It is easy to understand why Alexander Graham Bell, more than once, wanted to walk away from his invention and let others take it. Truth, in the face of greed, never endures easily. It takes brave men to wither the storms of maliciousness driven by avarice to profit off another individual’s hard work. This is clearly laid out in this biography of Alexander Graham Bell.
Insights Gained from this Work​​
Catherine Mackenzie, ​Alexander Graham Bell
​
Catherine Mackenzie, ​Alexander Graham Bell
Final Thoughts of this Author
Throughout the book Bell’s dependence on others becomes obvious and is well explained. Yet, nothing should be taken away from him as the following passage documents how much he and his wife and children withstood prior to profiting from his invention.
​
Sharp reality began to wear through the brave stuff of his fancy: the reality of unpaid rent; of pitiful little personal loans that left stinging marks in pride untouched by frayed cuffs and shabby coats; the realization that to his world he was not at all the romantic figure of penniless genius of his mind’s eye, but only a ‘tiresome young man who neglected profitable inventions to pursue chimerical ideas.’
Catherine Mackenzie, ​Alexander Graham Bell
​In this case his chimerical idea—the telephone—returned a rich reward to the man … his family … and his society which at times treated him with disdain. ​This book is a good read for those who need to understand that sometimes greatness only arrives after years of great adversity, and that greatness is rarely achieved without help.
Comparing Three Great American Inventors
Comparing three great inventors of the day, Carl W. Ackerman in his Biography of George Eastman wrote the following of Thomas Alva Edison, George Eastman and Alexander Graham Bell: [the order in which the men are mentioned has been reversed for a better flow with this review]:

​Eastman, Edison, and Bell differed from each other in their business viewpoints.

Eastman was first and foremost a businessman, then a manufacturer and then an inventor. Edison was first and foremost an inventor who, later in life, learned the value of patenting and building a business on those patents. Alexander Graham Bell, in comparison, was different. Catherine Mackenzie wrote this of the inventor only a few years before Mr. Ackerman wrote his observations of the three inventors above, possibly drawing on Catherine’s own earlier observation:

Genius as he was, Graham Bell was wholly incapable of applying any one of his own conceptions to a practical end. To Bell, the search for knowledge was the only really absorbing thing in the world. Goals were never as important to him as his progress toward them. His wife, always his closest companion, lamented that “he never wanted to finish anything,” and that “he would be tinkering with the telephone yet if I hadn’t taken it away from him.”
Catherine Mackenzie, ​Alexander Graham Bell
Return to the Industrialist Bibliography Home Page