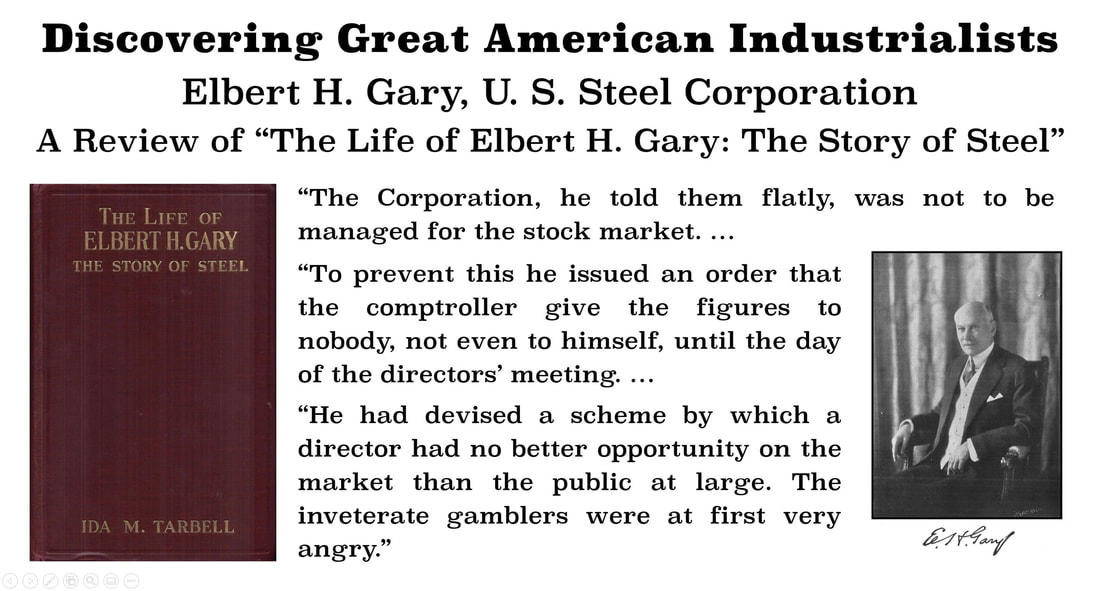 A wonderful counterbalance to Mr. Rockefeller's autobiography is this biography published in 1925 by Ida Tarbell of Judge Elbert H. Gary—​the man who helped launch the U.S. Steel Corporation and led it at its founding. This book was a pleasant surprise.

A sample of the unexpected was the extended elaboration on the "Gary Policies" in a chapter entitled "Who Shall Rule?" This author's thought after reading the chapter was, "Who Would Have Guessed?"

One of his policies is highlighted above: earnings transparency and what this author calls "business-first."
​A Review of "The Life of Elbert H. Gary: The Story of Steel" by Ida M. Tarbell
Reviews of the Day: 1925
The release of the book was front page news.

Miss Tarbell portrays the life of the head of the steel industry in this country and intimately pictures his quarrels and disagreements with other financiers over his labor and stock market policies. She quotes Gary: "As a matter of fact I always thought this use of insider information by directors … was akin to robbery."
The Idaho Statesman, November 2, 1925
Interestingly, many of the articles were about the "New Ida"
But what a difference in Miss Tarbell. What has become of the fire-spitting Ida of the old days when she was tossing literary matches at the gasoline tanks of the venerable John D. [Rockefeller Sr.] ​… Has she been mellowed by age, has she seen the error of her ways, or what?
The Harrisburg Telegraph, November 4, 1925
Editor's note: As indicated above, many of these stories were stories carried on page 1 or 2 of the newspapers.
Selected Quotes from "The Story of Steel"
On Judge Gary working to end the twelve-hour day
Secretary of Commerce Hoover, through whose courtesy I have been able to examine all of the departmental correspondence in the matter, says that Judge Gary "through his leadership and cooperation, made the largest contribution possible to the final solution of the twelve-hour day problem in the steel industry"—a comment which he permits me to quote.
Judge Gary being explicit in his support of collective bargaining
"I think labor ought to be encouraged to deal collectively, and it ought not to be prohibited at any time from dealing collectively; but dealing collectively, in the form of committees, or however they themselves may decide, is one thing, and dealing collectively as insisted upon by the labor union leaders, which means that the union labor leaders shall decide all these questions, and shall represent the men, whether they are asked to or not, and will establish a basis for the closed shop which would shut out the individual voices of these men practically, is quite a different thing.''
Judge Gary on protecting shareholder interests
"The best interests of the stockholder are always served, always protected, by first, a conservative management which is best calculated to save the corporation from financial harm, disaster or distress, whatever the business conditions may be or whatever emergency may arise."
This Author's Thoughts and Perceptions
​Gary's policies included: ​
One of the first examples of the implementation of these policies was Judge Gary's decision to eliminate the ability of the board to use its advance knowledge to trade their stocks—insider trading that, at the time, was "not illegal" but still very unethical. ​Gary considered this unfair to the public and only much later would insider trading be made illegal [this is relevant to IBM as Watson Sr. took similar action to stop certain members of his board from pumping and dumping the stock of the C-T-R Company].

This book is an amazing read and I find it insightful that Judge Gary sought out (pursued actually) Ida Tarbell to write his biography even after her series of articles on Standard Oil and being branded a muckraker by President Roosevelt.

Judge Gary must have seen something in her writing, frankness and approach that appealed to him.

In addition, he had no fear of the facts from which Ida M. Tarbell composed a foundation for truth.