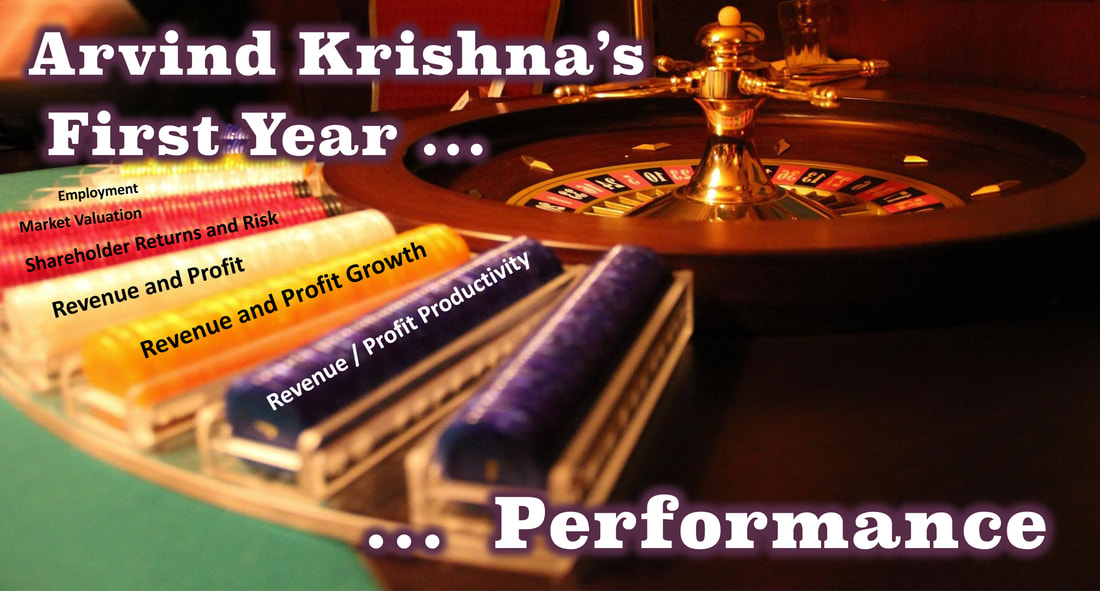 As you will see, Mr. Buffett made the right decision selling his IBM holdings. Now is probably not the time to be an IBM stakeholder: shareholder, customer, employee or supportive society. IBM hasn’t been a battleship turning; it has been a battleship taking on water faster than the crew can pump it out. The men and women in the pilot house have ignored and abused those manning the boiler room for more than two decades.

The company is approaching a point at which it will be powerless to control its fate.
​
Soon, it may find itself dead in the water.
Details of Arvind's First-Year Key Performance Indicators
Select any of the buttons below to read the evaluation of Arvind Krishna's performance in that particular area.
This Author's Thoughts on Arvind Krishna's First Year as CEO
Falling revenue exposes that customers aren’t enthusiastic about the corporation’s product strategies. Falling returns demonstrate that shareholders aren’t impressed by the size of share buybacks, and they aren’t myopically focused on the consistency of dividends—or monikers like Dividend Aristocrats, and they definitely aren’t trusting earnings-per-share metrics. Falling productivity reveals the employees’ lack of engagement, enthusiasm and passion.

IBM has been getting more opaque with critical numbers, such as employee engagement and customer satisfaction. These should be made available to shareholders—the owners. Even several once-reputable, business-focused, magazines that lighted the way forward for American Capitalism, are failing at their fourth-estate duties. They are merely regurgitating overly rosy executive outlooks, and monitoring and rewriting corporate press releases. Are these journalists paid by the worthy insight or the word count?

Ida M. Tarbell wrote an expose on John D. Rockefeller Sr. and the Standard Oil Corporation. It was a turning point in our corporate history. No, she did not halt the consolidation of small businesses into large corporations—nor did she think that necessary, but she and her fellow muckrakers inspired a public belief that ethical standards should be applied to a corporation as well as to an individual.

Men and women like Dorothy Shaver of Lord & Taylor, Elbert H. Gary of U.S. Steel, Thomas J. Watson Sr. of IBM, George F. Johnson of Endicott-Johnson Corporation, George Eastman of Kodak, Owen D. Young and Gerard Swope of General Electric, J. C. Penney of J. C. Penney Company, B. C. Forbes of Forbes, George M. Verity of Armco, William Cooper Procter of Procter and Gamble, and John H. Patterson of NCR to name a few, stepped in to fill these new roles. Granted that they were tough, but they generally fair individuals who attempted to treat their stakeholders equitably, and they demanded that their organizations serve their four major stakeholders: customers, employees, shareholders and society. As is necessary within any ecosystem, they had to fight for a balance in the distribution of profits to make their individual ecosystems … self-sustaining.

John D. Rockefeller Jr., the son of the target of Ida M. Tarbell’s early articles, evidently took to heart what she and others wrote. He expressed his obligation to one of his stakeholders: his community.

Were it not for the community’s contribution, in maintaining law and order, in providing agencies of transportation and communication, in furnishing systems of money and credit, and in rendering other services — all involving continuous outlays — the operation of capital, management, and labor would be enormously hampered, if not rendered well-nigh impossible. … The recognition of the social aspect of industry is of vital importance to its successful operation.

And a chief executive that can articulate and justify those yearly decisions to the satisfaction of all his or her stakeholders … is worth big bucks.