A Review of "Successful Living in this Machine Age" 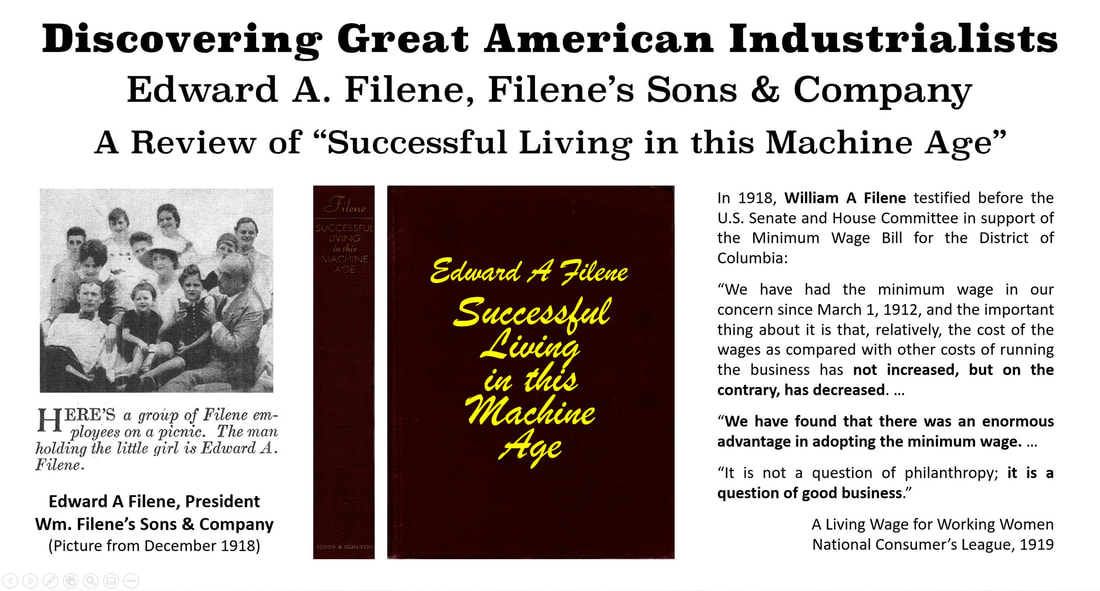 ​A Review of "Successful Living in this Machine Age" by Edward A. Filene
A Review of the Day: 1931
“Ten years ago, Edward A Filene in his book, The Way Out, forecast with deadly accuracy the industrial trends that are at present so upsetting the world of business [the Great Depression]. Mr. Filene again lights his torch and blazes a new business path that once illuminated seems certain to be the path which businessmen and capitalists will have to follow if they wish to retain their place in our new economic system. … Mr. Filene with his business vision and broad intelligent liberalism answers questions and assuages fears which are on the lips and minds of every business leader.

“Capitalism is not through, but … the old exploitative and promotive forms of capitalism are definitely through; and he very clearly shows why.

“Thousands of young men all over the continent have for years benefited from Mr. Filene’s spoken and written word and successful example. His kindly and intelligent interest in the masses has become a feature of American life.  He is a social-economic statesman … business leaders will save themselves and the human family much grief by reading and tuning in on the new trends … Those who wish to succeed in business and at the same time contribute something to the welfare of humanity will give his new book their close and careful attention.”
Vancouver Sun Book Review,  "The New Capitalism," December 1931:
This Author’s Thoughts on "Successful Living"
Reading this book, I thought that it could be reprinted today with an alternative, questioning title: “How Will Artificial Intelligence Affect Our Society?” This book is an in-depth examination how the “machine age” had affected the society of Filene and Watson. It is a book full of suggestions of how businessmen needed to adapt to bring the economy out of the Great Depression.

As I read it, I thought, “These are all the questions we should be asking about artificial intelligence. How will we, as a society, adapt in the areas of family, politics, economics, employment, education, religion and profit when we actually see full implementations of A.I.?” Artificial Intelligence could affect this century as significantly as mass production did the last. In the words of Owen D. Young, a peer of Filene in business, “Everyone knows that it is seldom possible to solve old problems without introducing new ones.”
​
This is a book published in 1931 that raises interesting questions—even today—for reflective individuals.
Is this Adam Smith's "The Wealth of Nations" on Steroids?​​
My first thought while reading this book was that, “this is The Wealth of Nations on steroids.” Adam Smith wrote:

"Every man, as long as he does not violate the laws of justice, is left perfectly free to pursue his own interest his own way, and to bring both his industry and capital into competition with those of any other man, or order of men."

Filene takes this thought to a new level with his, “A Definition of Mass Production:”
Filene also addresses issues that are still alive and bothering society today. He writes that the tariff implemented at the beginning of the Hoover Administration was the “Tariff of the Unsuccessful Businessmen.” He writes of education that educators must “concentrate on the great social task of teaching the masses not what to think but how to think, and thus to find out how to behave like human beings.” Of business he made this astute observation:

One wonders if today’s chief executives realize how their downward devolution in protecting their employees’ employment security and over-investment of one form of paper (greenbacks) in another form of paper (stock buybacks) at the expense of investing in people, processes and products is affecting human relations, the world and our country's forward progress.
Background on Thomas J. Watson Sr. and Edward A Filene
​Watson and Filene also had a business relationship. In 1931, IBM acquired exclusive rights to the Filene-Finlay Translator. This was a system that provided for the translation from a speaker’s language into four other languages. This was a tremendous leap forward for international conferences. Tom Watson saw it as a means to bring a distant world closer together through better communication. This translation system was installed at the League of Nations in Geneva, the Permanent Court of International Justice at The Hague, and used at the first International Conference for the Blind, numerous meetings of the International Chamber of  Commerce, IBM’s One Hundred Percent Clubs, and World Youth and Boy Scout Conferences.

Its loan to the International Military Tribunal at Nuremberg after World War II was it most visible and one of its most significant contributions to society. Justice was better served as it provided for smooth, simultaneous translations between English, French, German and Russian for defendants, witnesses, judges, counsel for the prosecutors and defendants, and the media. ​​It was estimated that without this technology and the concept of simultaneous translation, the trial would have taken "four times as long." Instead of less than a year for justice to be served, it would have taken possibly four years.

​Francesca Gaiba, author of The Origins of Simultaneous Interpretation, writes that “the trial would not have been possible without the simultaneous interpretation into four languages. The mass media both praised and criticized it, but to insiders of the translating profession it was clear how revolutionary it was in the field.”

The most poignant observation was made by Hermann Göring when he commented during the trial that the system is “very good—but it’s shortening my life.”
​
Thanks to two businessmen, timely justice was served.
Return to the Industrialist Bibliography Home Page