Review of B. C. Forbes' "Men Who Are Making the West" 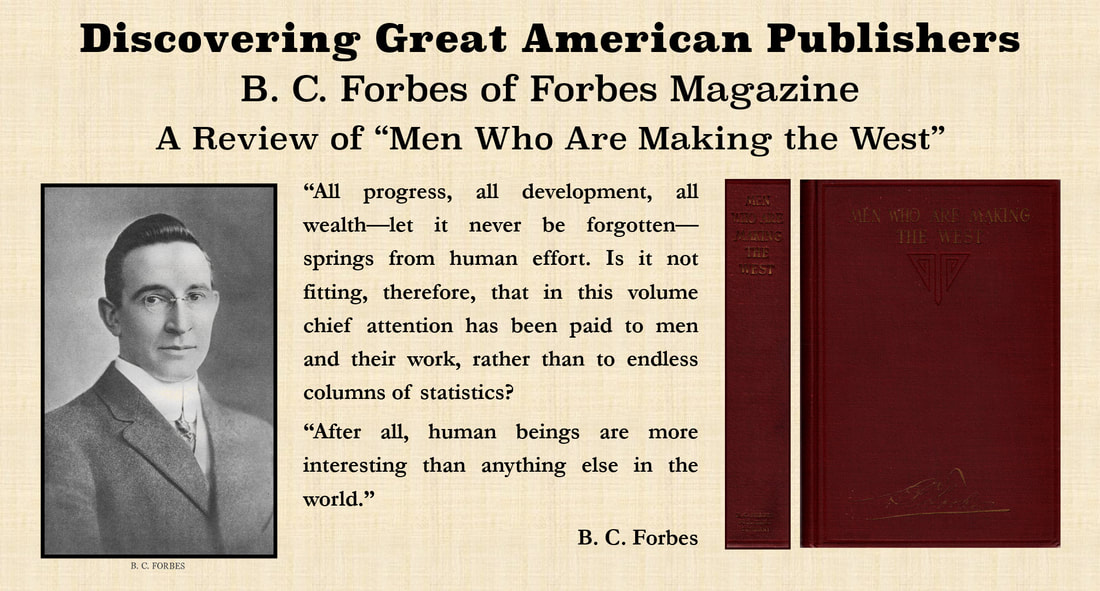 “New York has had and is having its day. Chicago, of the Middle-West, has been coming vigorously to the front during the last forty years. Today the cities of the Pacific Coast, notably Los Angeles, San Francisco, Oakland and Seattle, are rising rapidly in population and in industrial and commercial importance.

"An undue percentage of printers’ ink has been devoted heretofore to proclaiming the greatness of the East and the East’s businesses and financial giants. This volume represents a feeble, but earnest and sincere, effort to tell the rest of the country something about … a number of men who have played a conspicuously important part in the development of the West.”
B. C. Forbes, Foreword from Men Who Are Making the West
​A Review of "Men Who Are Making the West" by B. C. Forbes
Reviews of the Day: 1923–24
" 'Men Who are Making the West' is a meaty, pithy, exposition of management, of financing, of meeting obstacles and difficulties, and of business policies which can be applied to business every day.
​
“It is one of the finest biographical books of the time … best Forbes has yet written.”
The Oakland Tribune, Book Reviews, March 2, 1924
Selected Quotes or Observations from B. C. Forbes' Interviews
“There would be greater prosperity, greater health, greater happiness throughout the whole world if all business men, as well as others, would set up the Golden Rule as their guiding principle. It is the only way to build up a permanently successful organization.
​
“There is not much satisfaction in running a business on crooked lines.”
Captain Robert Dollar, Founder of the Dollar Steamship Lines
“Without a dollar of cost to them, the employees enjoy the advantages of a liberal pension plan, life insurance, and sickness disability benefits. … Three hospitals and a sanitarium for tubercular patients have been built by the company and maintained with scrupulous care. …
​
“Each employee may deposit up to 20 percent of his or her salary under a Stock Investment and Savings Plan; and to every dollar thus saved the company adds a bonus of 50 per cent. … This five-year plan matures in 1926, when the stock will be divided among and delivered to the employees. … Eighty-six out of every 100 employees are taking advantage of this.”
Kenneth R. Kingsbury, President of Standard Oil Company of California
This Author's Thoughts and Perceptions on "Men Who Are Making the West"
In evaluating the first two reviews above, it is important to remember that the first two decades of the 20th Century were owned by muckrakers who exposed the dirty dealings of some truly despicable individuals and their corporations. Although necessary and a critical turning point in American history, it cast a historic, generalized pall over even great industrialists. Ida M. Tarbell, in my opinion the best-of-the-best of the muckrakers, eventually became disillusioned with the whole profession and wrote in the foreword of her biography on Owen D. Young:

“I have never been one who felt that the praise of him you believe to be a good man is a shame to a writer, any more than I have felt the condemnation of a man you believe evil is a particular virtue in a writer.”

Finally, she wrote in her autobiography:

“The truth of the matter was that the muckraking school was stupid. It had lost the passion for facts in a passion for subscriptions.”

Yes, America needed some bad business practices exposed to move forward, but Ida Tarbell knew that there also needed to be a balance. She went so far as to spend years on the road to produce that balance: her book, “New Ideals in Business.”
This having been said, B. C. Forbes, who was still early in his editor’s career, was overly “laudatory.” It is to the point that the reader can wonder if the whole truth is being told. His later works show a better balance, and he also includes the viewpoint of the employees about their employers. Later in his business career, he wandered the halls of the corporations he covered.
​
Personally, I wish I could find an article by him—which probably doesn’t exist—entitled, “The Top Businessmen Who Failed My Test,” because there were many. Christy Borth, in “True Steel,” documented what Mr. Forbes told a gathering of American Rolling Mill Corporation (ARMCO) employees:​

“I don’t think I need to remind anyone here that the steel industry has had a particularly unsavory reputation for having been headed by tough babies. I’ve known most of the heads of this industry personally. Seeing you workmen in this home [of George M. Verity, chief executive of ARMCO], I’ve been thinking how utterly unlikely such a gathering would have been in the homes of some of the autocrats I’ve known.
​
“Ever since I started Forbes’ Magazine, I’ve striven to show industrialists the value of the line of conduct typical here. At the masthead of every issue, I’ve put the Biblical admonition: ‘With all thy getting get understanding.’ If only fifty-one per cent of the nation’s industrialists could learn the value of the [George M.] Verity formula, and apply it, we should not have to fear for the future of America.”

Maybe if we could get fifty-one percent of our twenty-first century chief executives to be industrialist-minded rather than capitalist-minded we too “should not have to fear for the future of America.” My recommendation is to not fret too much over the laudatory words … study the facts of how these men treated their employees. They implemented and improved benefits—that increased productivity.

Until the next book review, with all thy getting …

Cheers,
​
- Pete
The Top American Business Men Who Were Making the West
This is an alphabetical listing. The list is not in the order of appearance in B. C. Forbes' book.
Return to the B. C. FOrbes Bibliography Home Page