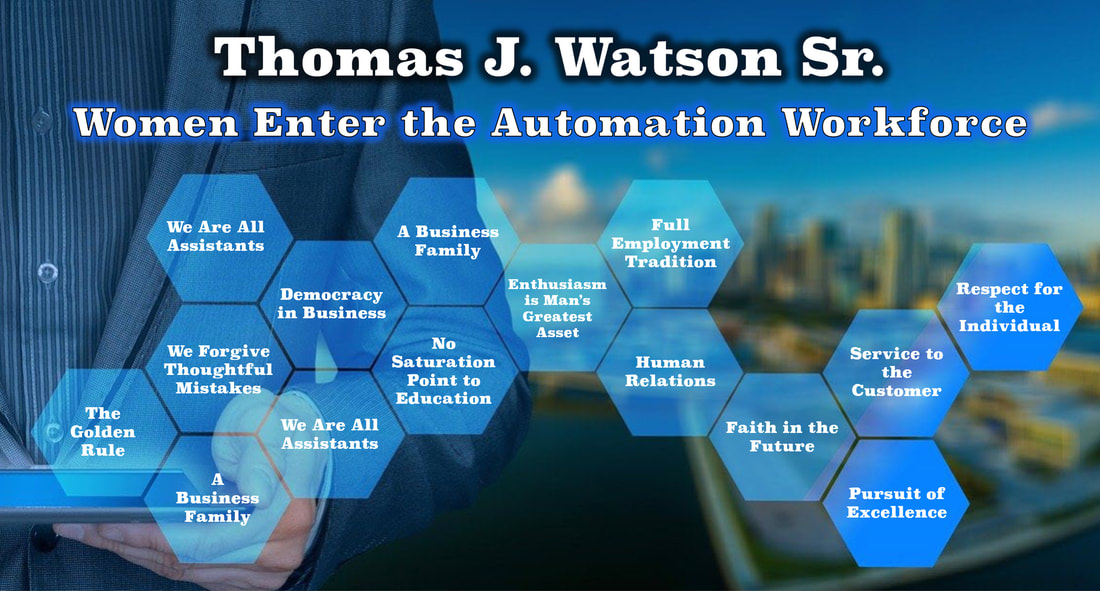 Tom Watson Sr. Brings Women into the Automation Workplace
Tom Watson was a man who evolved in his beliefs. This comes across in this story related in the Binghamton Press by Drury W. Cooper, a member of the IBM Board of Directors, at Watson's 33rd Anniversary Celebration held in 1947:
​"Mr. Cooper, told several humorous stories of Mr. Watson's early years in the business. He remarked at one point that Mr. Watson, a third of a century ago, was noted for two things: 'He smoked like a chimney,' he said, 'and he wouldn't have a woman in his business. ​He gave up smoking—and he's changed in the other respect, too.' "
The Binghamton Press, August 15, 1947
Yes, by 1947 women were well on their way to be recognized as integral and critical parts of a Tom Watson driven organization.

​These are a few of the stories, dates, and newsworthy firsts for the women of IBM.
Thomas J. Watson Sr. was a man who believed that hope was a critical factor in motivating men—hope of a better future for themselves and their families. He believed that if these men sought after and worked to make that hope a reality, they would bring their corporation along with them. He knew he needed a team that understood hard work and would not shy away from it—eventually he understood that he needed both men and women.

On the subject of women, I must provide some details concerning the videos that I use for "The World's Greatest Salesman." They are located here: [Tom Watson videos]. I preserved as much as I could of Thomas J. Watson Sr.’s exact words. ​The word “men” will appear so often, such as in “The Man Age” or in his other speeches, that women may feel excluded from his comments and observations.
To this I would say, “Please don’t.” It is a function of the times. ​Women did not get the right to vote until 1971 in Switzerland; the words he used in the videos are from the 1920s and early 1930’s. At the time in these videos, when he looked out over his sales force, his engineers, his shop foreman and his executives, all he saw for the most part were men.
This item is included to show that women were working at the corporation (or rather one of the independent companies which were merged to form the C-T-R Company) prior to 1911–14.
His anger is understandable, and Watson was known for expressing his outrage to those he could "supposedly" trust around him. ​If an executive can't openly express themselves around their selected, closest advisors, they need a different team around them.
For a certainty, his concept of “Democracy in Business” that he had preached since the early 1900's was not being observed in his own company—a company, into which, he was gradually integrating women. [Read this link to understand his concept of Democracy in Business. It had nothing to do with a "right to vote" but a belief in eliminating prejudice and class struggle within a business.]
Sometimes a chief executive officer needs to make changes with flair and determination; otherwise, a fundamental organizational and cultural change may never happen. He or she needs to convey that "resistance is futile." Integrating women into the automation workplace was a change Watson believed was necessary and ethical. When he made such decisions, they usually happened.
​Maybe one day the full story behind IBM Sales School Class No. 125 will be told.

[If you have any IBM Business Machines Newspapers, please contact us. We need them to keep our articles complete, accurate, and as up-to-date as possible. This update was possible because of the donation of several of these IBM newspapers. If you don't want to part with them, we will scan them in, make them searchable and return the printed material to you.]
These pictures exemplify some of the early promotions and significant attainments of the women of IBM. They are from IBM Business Machines, the company's internal newspaper (referred to as a house organ in the day) and The Binghamton Press which, if IBM sneezed, this paper recorded it for posterity.
An excellent book to read that I highly recommend is Among Equals: A Memoir of Ruth Leach Amonette by IBM's first female Vice President and at the time, only one of five IBM Vice Presidents. You can read my review here: [Among Equals]. To say it is a "breath of fresh air" in an overly male-dominated genre of IBM books would be an understatement. ​If you want to understand the value of diversity read this book and several of the others by male executives.

​You can read an excerpt from the book here: [A Student Pajama Party]. It is a charming story of an IBM Pajama Party thrown for Thomas J. Watson Sr.
​On October 30, 1941 Tom Watson announced four women being promoted to new IBM positions: New York Personnel Manager, Women's Secretary of Education, IBM Secretary of Education, and Manager of a New Department to focus on the medical profession.​

In August 1943, The Binghamton Press notes that for the first time in the history of the company's fifteen-year, suggestion program a woman has taken the top prize. She had only been with the company for four months. The article stated, "Her prize winning, precedent-making suggestion increases the efficiency of one IBM job by fifty percent." By August 1944, women had doubled the number of suggestions. It was noted in the press that "from January through July 1943, there were 55 winning suggestions ... submitted by women. In the same period this year [1944] there were more than 100. ... It was pointed out, the number of women employees had remained constant."
On September 12, 1943, the Poughkeepsie press noted that one woman "obtained a position as guard" at the Rudco [Poughkeepsie] plant of the International Business Machines corporation. It was not called a first for the Poughkeepsie site but is worthy of note ... and, similar to the women guards at Endicott noted above, it probably was a "Poughkeepsie" first.
​Customer Engineering Class #576 composed of 102 women opened on October 4, 1943 and was the largest Customer Engineering class on record (men or women). Tom Watson and F. W. Nichol congratulated them on being the first class of women to take this course—prior training of women being in the Systems Service Organization.

The following excerpt suggests that IBM branch offices put women to work in the field as customer engineers (individuals who worked on the physical "machinery" rather than the "programming") before the "first class" picture above. It seems that Tom Watson might have been following the lead of his branch managers who were taught to "think and act." IBM branch offices were always known to do the "right thing" to get something done. Branch managers usually used the oft quoted phrase to defend such a decision as "it is easier to ask for forgiveness than permission."
Paraphrased from: St. Louis Globe Democrat, September 4, 1943
"An urge to fix things coupled with practice in repairing irons, vacuum cleaners, and radios at home has put five women to work in another "man's" field as repairwomen for IBM. ... Customers who place repair calls [for typewriters or electric accounting machines] are slightly amazed when the young women walk into their offices, tool kits in hand, ready to go to work.

"In fact, at first, men employees in various offices using the company's machines were skeptical, ... until they were shown."
This author's comment: "You go, girl!"
On July 19, 1944, Tom Watson handed out diplomas to a graduating class of trained engineers. These classes included the first "seventeen trained women engineers" in the history of the company. In his greetings, Vice-President Charles A Kirk declared that "these women had an 'outstanding opportunity' in the business world. The company, he said, would expect just as much from them as from men on the engineering staff."
The Binghamton Press, "Three Classes of Engineers Are Graduated," July 20, 1944
After the war ended, many married women were displaced without and within IBM as the male veterans of war returned home. This is discussed in Ruth Leach Amonette's book: "Among Equals." The topic needs to be evaluated within its historical context. Peter E. Greulich was going to write his perspective on this question with his knowledge of what Tom Watson faced during the Great Depression and his experiences learned from the "Share-the-Work Organization."​

While reading the press articles of the day, though, Peter E. found put into words by a Binghamton Press Staff Writer what he would have written of IBM's—Tom Watson's—policy at the time. Although, the excerpt we are using below is not attributed to Tom Watson or anyone on the IBM staff, we believe it would have reflected the company's and the man's perspective at the time it was written: just before the end of World War II.
It took a while for this IBM—Tom Watson—policy to evolve, because of the chief executive's experience in the downturn after the previous world war which brought about the IBM Crisis of 1920-21, and his experience during the Great Depression. During the Great Depression, Tom Watson was part of and committed to a "Share-the-Work Organization." This was an attempt by the major industrialists of the day to alleviate family starvation and hunger through higher "family" employment rates. One of its major tenets (among many to alleviate family poverty) was that "no family deserved two incomes until all families had at least one." Therefore, they distributed jobs to ensure that as many "families" as possible had one major source of income. The Share-the-Work Program did much to dampen the negative effects of the Great Depression in the localities where it was implemented.

Tom Watson was seventy years old in 1944. He probably remembered all too well the suffering and starving children. He needed to be prepared to ensure that as much as possible his company could provide for as many "families" and "returning veterans' families" as possible.

These were not easy decisions, and I believe this excerpt mirrors what would have been Tom Watson's thoughts.

"We … expect to return to our original policy, which was in effect before the war, of employing only single females. During the last three years we have employed married women and dependents of our men going into the armed forces, with the understanding they would voluntarily leave their jobs on the return of their husbands to gainful occupations. We also have hired on a duration basis other married women outside of our organization whose husbands are in the armed forces.

"Our policy will enable us to make a post-war adjustment of employment on a recognized basis with a complete understanding on the part of each individual as to their employment status. We adopted this policy knowing that our first obligation is to the men in the armed forces and to the breadwinners of each … family.

"Most certainly it is my opinion that the industrial policy of the future should be to protect the family as a unit, and in pursuing such a policy I feel that it is the obligation of industry to see to it that there is at least one fully qualified wage earner in every family unit earning a sufficient amount of money to maintain the family on a good standard of living."