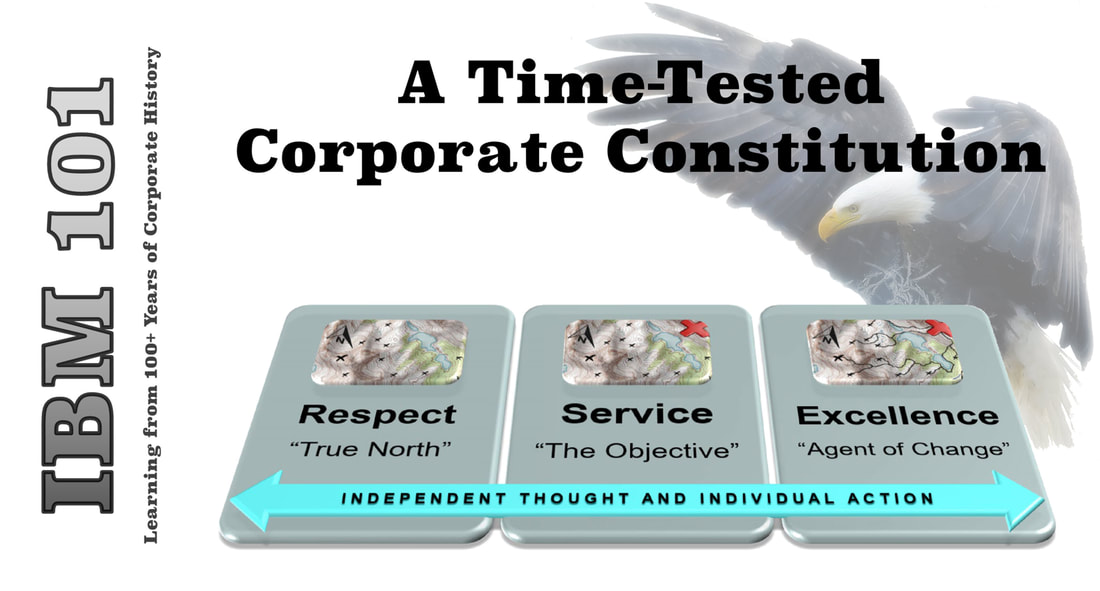 ​One hundred years ago this year, Thomas J. Watson Sr. took over the C-T-R Company. It was a haphazard consolidation of mismanaged companies—producers of meat and cheese slicers, coffee grinders, candy scales, time clocks and tabulating machines. It was deep in debt and on the verge of bankruptcy. From this institution he created the IBM Corporation. ​Watson Sr., considered IBM’s traditional founder, dedicated the last four decades of his life to his company. It became one of the world’s greatest corporate innovators.

Watson Sr.’s path was not an easy one though. He immediately faced five back-to-back recessions followed by the Great Depression. Then, rather than receiving a pat on the back for surviving, the economy treated him to four more economic downturns. All of this was punctuated with four of the six steepest stock market declines in recorded history. ​Remarkably during this economic turmoil, he transitioned his company from hand-cranked mechanical devices sitting on his customers’ front and back counters to electrically-powered tabulating machines, sorters, printers and typewriters filling their back offices.
​
Watson Sr. built a strong corporate culture upon employee dedication and loyalty. He used maxims—simple, memorable guides to life—to establish a business family instead of a family business. Three of these maxims were generously applied in his speeches of the day: Democracy in Business, We Are All Assistants, and We Forgive Thoughtful Mistakes. Watson Jr. would later distill his father’s many maxims into three simple words that became IBM’s Basic Beliefs—its 20th Century corporate constitution. Is it too hard to imagine that the belief system that gave rise to the prior century’s greatest corporate culture could serve as a starting point for similar journeys in this century?
A Time-Tested Corporate Constitution
Watson Sr.'s Democracy in Business
Watson Sr. with his concept of democracy in business was creating the first corporate employee-owners—men and women that would make business decisions as if they carried the owner’s burden. These employee-owners would eventually call themselves IBMers. The term did not acknowledge a person’s social class, educational background, pay grade, time-in-service, stock ownership, or corporate stature; rather it described a person of commitment, dedication and loyalty. It was an individual in a win-win relationship with their company and part of a corporate family. Of course there were leaders—in a Watson Sr. democracy someone had to be held accountable for a final decision—but IBMers discussed issues as peers, united around achieving a common goal.
Watson Sr. Fostered an Environment of Innovation
In the midst of the depression, Tom Watson Sr. desired an organization that encouraged individual thought and emboldened individual action. He needed his employee-owners to take risks. He told members of the IBM Club, “There is not a man in this room who needs to ask his supervisor whether he should do this or that. . . . Use your own initiative. . . . Do not wait for your supervisor to tell you to do something. . . . That is the only way a man will ever gain promotion in this business.” Watson Sr., so commonly associated with the word THINK, was also known by his employee-owners for another word he almost always used in the same breath—ACT.

He knew that with forward movement came mistakes. Mistakes are the great instructors of the lowly and the mighty, and the Recession of 1921 exposed one of Watson’s mistakes. He forecast a year of 100 percent growth and it did not happen. According to Thomas and Marva Belden in The Lengthening Shadow, “Salaries were cut 10 per cent. . . men were laid off, skilled and expensive labor going first. Watson made the mistaken decision to stop producing new printers. . . . Watson had strained his credit to the limit.” Even with the economic backdrop of the Roaring Twenties, it would take eight years to recover the revenue he lost in one.
​
So in 1932 Watson stood before the best-of-his-best salesman and admitted his mistake. “I am ashamed,” he told them. “We just didn’t hang on to our courage and our belief in IBM and in IBM men.” He modeled what he believed—thoughtful mistakes would be forgiven, just keep moving forward.
Watson Jr.'s Summative Words: Respect, Service and Excellence
IBM’s founder had discovered the best path for growth through the twentieth century. Unfortunately, by the 1940s, all the needs of his corporation could no longer fit through his always open, but lone door—now the person that most inhibited his company’s growth was the old man himself.

Thomas J. Watson Jr. inherited a company that was now famous for high pay, generous benefits and intense devotion “to Dad.” So Watson Jr., upon assuming control, shifted this loyalty—not to himself, but to the corporation. He moved away from his father’s authoritarian structure. He re-architected IBM.

He built a unique set of corporate touchstones for evaluating, thinking and acting independently. These beliefs embodied the same set of principles as his father but the new approach was scalable. Using three basic beliefs as a corporate constitution, he monitored and controlled their execution across the corporation. He implemented multiple channels of communication: information flowed up from the employee-owners through Opinion Surveys, Feedback Sessions, Executive Interviews and Speak Ups; information flowed down through Management Briefings and Executive Letters. This constant flow of guiding information under the CEO’s watchful eye, prevented departmental dictatorships, controlled anarchy, ensured corporate consistency, and illuminated and eliminated elephants in any room where critical decisions were being made.
Is What Was Once Old, New Again?
“Everything that is new is usually nothing but the promising child of time-tested older achievements—an ideal continuation of tradition.”
​Elisabeth Gürtler
​Change is inevitable. While learning from the past we should not be held hostage to it. IBM’s past is the story of a great culture that did not keep the company from suffering during tough times, but it bound its people together to soften the pain of economic downturns, found a path forward during times of transition, and lessened the impact of a leader’s lack of clairvoyance.

​Such a culture is worthy of emulation.
Return to Corporate 101 Articles Home Page