He Recognized in All Men, His Brothers. 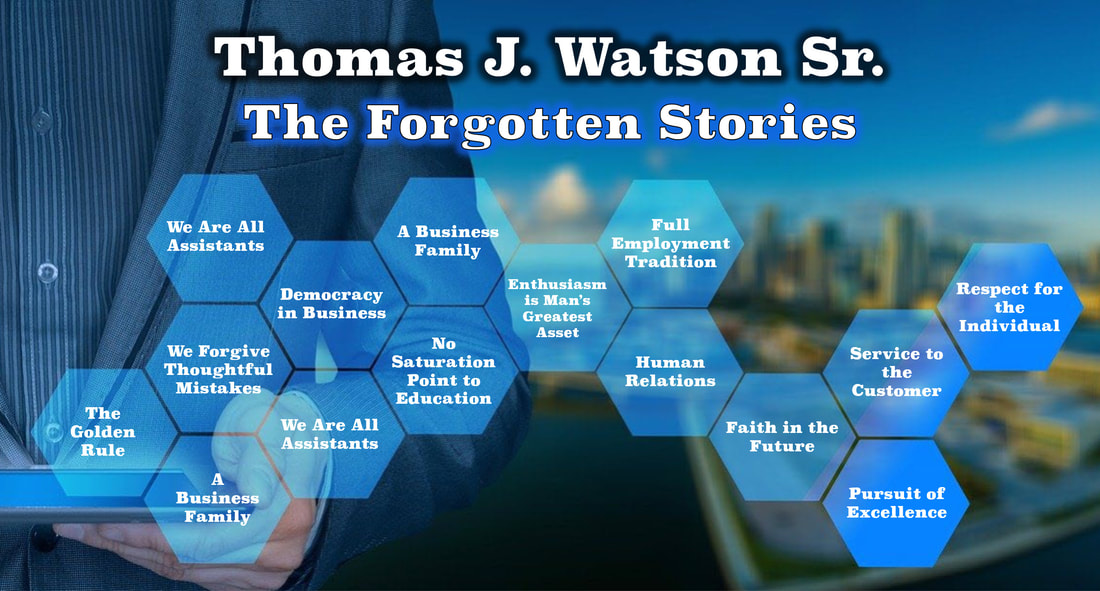 The businesses today that follow along the lines of democracy are moving faster and making greater progress than the ones in which some men still say, “Well I have had better educational advantages than that man,” or, “I have had better home surroundings than he has had; I am in a little different class and I am not going to associate with him.”

​There is no place for such men or such thoughts in The IBM organization.

You all look alike to us.

Thomas J. Watson Sr., "Democracy in Business​"
This was the "alikeness" that he wanted in his employees when they looked in their IBM corporate mirror. He commented in 1932, "I am not telling you what to think about. We do not include it in our motto." No he did not; he just asked the elitists and bigots to work somewhere else. They should find a place where elitism and prejudice were allowed, and respect for the individual, service to the customer, or the pursuit of excellence were not expected. As a leader that was his right—and his duty— to enforce.

William Rodgers got it wrong. Watson Sr. knew what he wanted. He knew what he needed. He carried the ultimate responsibility for the success or failure of his corporation; and the employment of thousands depended on his decisions. He knew that a corporation comprised of thousands of employees with crushed spirits could not last forever.

So he created the world's first corporate employee-owners—our reflection on the outside was conservative but on the inside we were Watsons' Wild Ducks.
​Probably the best description of why Watson Sr. asked all of his employees to dress impeccably was presented in this statement given in eulogy at his death:

The truth came to him simply—he believed clothes don’t make the man but they assist the gentleman.