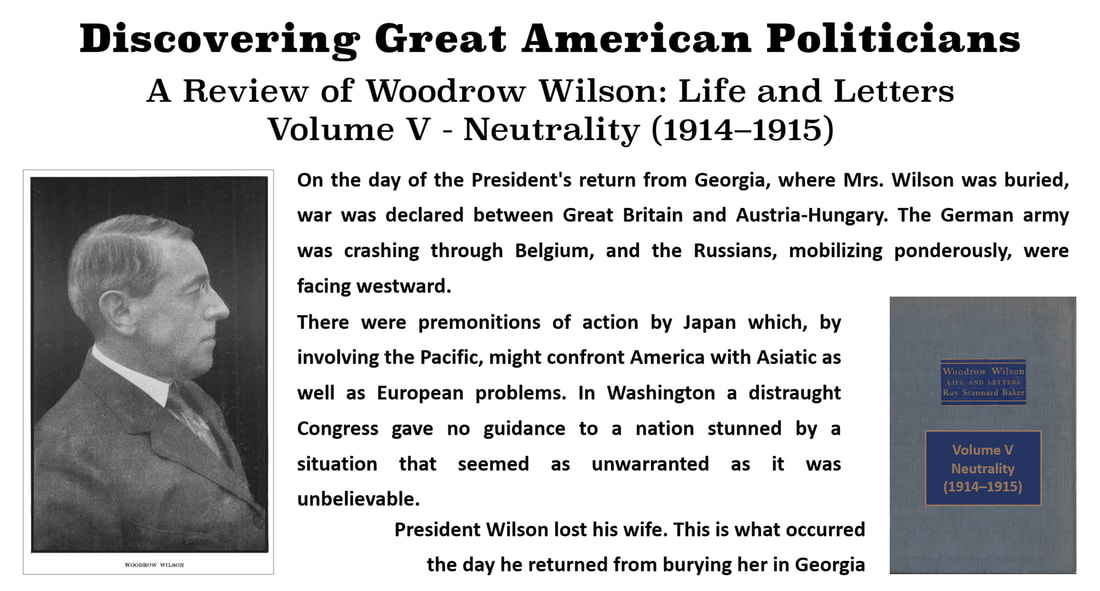 This volume was published in late 1935.
A Review of Volume V: Neutrality (1914-1915)
Volume IV: Woodrow Wilson: Life and Letters - Neutrality (1914-1915)
​Almost all the “Reviews of the Day: 1935” discussed the timing of the release of the book. Most reviewers felt we were on the same path heading into a second world war that the country was on in this pre-World War I release of the Life and Letters of Woodrow Wilson.
​“Mr. Baker’s fifth volume in the Wilson series takes up mainly the efforts of Mr. Wilson to keep the country out of war … as such it is very timely … Europe is [again] on the verge of war. …

“That Woodrow Wilson was earnestly desirous of keeping the country neutral can hardly be questioned in view of the evidence produced by Mr. Baker. Though his sympathies were clearly with England, he sought to think as a neutral and to adhere rigidly to a policy of neutrality.”
“Wilson and American Neutrality,” Mauritz A. Hallgren,
The Baltimore Evening Sun, January 4, 1936
​This final insight is from Mrs. Woodrow Wilson. I found it both heartwarming and very human.
“Three distinguished Washington women—Mrs. Woodrow Wilson, Mrs. Owen J. Roberts, and Mrs. Frank Knox—recently popped into the news behind the news.
​
“Mrs. Wilson was discussing the latest volume about her husband by Ray Stannard Baker, the war Presidents literary executor. Informed that the book was more historical, more critical, than earlier volumes, Mrs. Wilson replied: ‘I am glad. The last thing my husband wanted was to be placed on a cold and lofty pedestal.’ ”
Ray Tucker, Nebraska Grand Island Daily Independent, January 25, 1936
On Woodrow Wilson’s and William Jennings Bryan's idealistic split.
“With the idealist, method is everything, or almost everything; many can dream, few know how to make their dreams come true. As to the methods to be employed [to achieve their ideal of peace], there were … considerable divergences of opinion which were later to broaden into chasms. …

“These idealistic plans were based upon the unrealistic conception of a more or less disinterested America, supposedly isolated, but so powerful and rich as to be irresistible. As a matter of fact, the United States was already deeply immersed in world-trade rivalries; it had distant possessions, such as the Philippine Islands; it was rapidly acquiring new spheres of power and privilege in Central America; its isolation was an unexploded myth; its disinterestedness mainly political.
​
“In fact, the entire world was laboring under the fallacy that somehow political stability and international harmony were attainable without meeting and dealing boldly with the economic necessities and jealousies that were chiefly responsible for the friction.”
Mr. Baker evaluates the long-standing friendship between Woodrow Wilson and Colonel House, and why this relationship led to so many diplomatic blunders with England and Germany leading up to World War I.
“In short, this is the first demonstration of the working of that strange and unclear relationship which was to becloud American foreign policy and exasperate European diplomats until, in the end, a revelation of the real disparities led to serious difficulties.
​
“On Wilson’s part it seemed always to have been a relationship of faith [in his friends] without complete understanding, of trust without actual commitment—wholly … deplorable in some of its results. But it was one of those ‘necessary friendships’ which throughout his life so often influenced, and sometimes warped, Wilson’s clear-running judgements.”
To start, I had never read Woodrow Wilson’s “too proud to fight” speech. Most of what I read in school ridiculed “the phrase.” I find the context within which it was used quite admirable and worthy of American ideals. I agree with Ray Stannard Baker that it is most unfair to evaluate the phrase “by itself” and out of context.

“The example of America must be a special example.

I like the following quote attributed to one of Woodrow Wilson’s speeches in Colorado Springs. This insight helped me to understand why I don’t get so upset with the plethora of our modern-day politicians with which I don’t see eye-to-eye: Today, there are more scoundrels than sincere men and women in the halls of Congress.

“I am more afraid of a sincere man who is mistaken than of a scoundrel who is trying to mislead us.”

Of course, the thought does not relieve us—the electorate—of the responsibility that we keep resending “the scoundrels” back to Washington with every election cycle.
​
Mr. Baker also takes a look into the future—our present—and offers some wishful thoughts. I wonder if they have become true? At the current time it appears to not be so as we tear down statues and rename buildings “thinking” we can know the inner spirit of a man and can judge his or her actions of a hundred years ago with historical clarity and unbiased perceptions.

“The judgement of the future will be founded not so much upon a test of perfection as upon the immensity and intractability of the problems he [Woodrow Wilson] had to meet—could any man have succeeded? Or upon his handling of his tasks as compared with other contemporary leaders of the world: Grey, Clemenceau, and Lloyd George, with the Kaiser and the Czar.

“What was the residue of his statesmanship? Compared with the others, what did he leave, in ideas, in aspirations, in new laws or organizations, which will be of value to men in future times? A statesman may fail in innumerable details: he may have in his temperamental characteristics what Emerson called “qualities of unavailableness,” and yet, he may survive by a certain unity of character or purpose which the world needs and will prize.
​
“Men are judged by what they strove to do, by the mightiness with which they strove, as well as by what they actually did do.”

Ray Stannard Baker, Woodrow Wilson Life and Letters, Neutrality
Maybe we should teach more Emerson or read biographies by men and women of the character and stature of a Ray Stannard Baker and an Ida M. Tarbell? We seem to be attacking historical figures for what would be—within the context of their times—limited failings, instead of remembering them for the greatness of their strivings and what they accomplished.

​Another great, challenging read by a great researcher and author who avoided in these Woodrow Wilson works the stereotypical result often associated with the title of “muckraker.”