A Review of Andrew Carnegie's "Round the World" 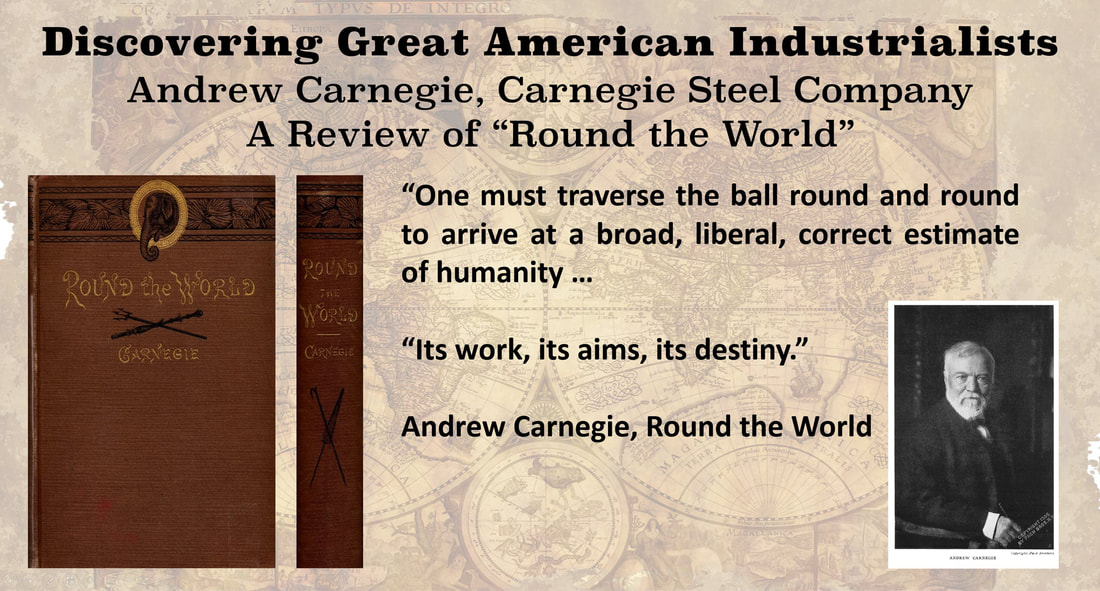 The following is the concluding paragraph to the book:

"In the confident and inspiring belief in the sure coming of the day of the Brotherhood of Man, I lay down my pen and bring to a close this record of my tour round the world."
Andrew Carnegie, Round the World
A Review of "Round the World" by Andrew Carnegie (1878)
Why Read "Round the World"
​There is usually a reason why I read a book. Especially one such as this which is so far off base from my normal reading about industrialists and their business exploits. This is the story of Andrew Carnegie’s eight months of travel “round the ball.”

It is a compilation of his notes written in his diary and published for his friends enjoyment.

​If one wants a peek into the psyche of an individual, crack open their daily diary or business journal.

​The path to this book was a little meandering.
As always, this was a tangent to my research on Thomas J. Watson Sr. The traditional founder of IBM was supporting and funding the Mark Twain memorial. It is embarrassing to admit that I had read little of Mark Twain, so I purchased a book about him entitled, “Mark Twain in Eruption.” As I was reading this book, I came across a passage concerning Andrew Carnegie. Mr. Twain found him a little too talkative about himself—conceited.
​Well, Mark Twain, to put it mildly, wasn’t known as a humble individual, so was his perception on this one occasion accurate?
He probably did have a lot to share with Mr. Twain, and he appears to be one who did not shy away from sharing his experiences. He did so with those he met on his travels and exhibited this willingness by publishing these travel notes for his friends. But was he egotistical and self-centered? It is probably more that he was not only willing but wanted to share all he had learned about humanity around the world: That although we have so many differences in customs, beliefs and livelihoods, he found that we are all fundamentally alike, and that humanity is just at different points in an ever onward, evolutionary, upward journey.

If I had been in the room with Andrew Carnegie, I would have shared little of myself. I would have been a sponge asking him to talk more. I doubt that I would have found him egocentric, but rather just the opposite—a man not at the center of everything he spoke of but the possessor of so much international and humanitarian experience for his day. An impressive wealth of knowledge that he had personally experienced and would make available for little more than the asking. I would have been an appreciative and willing listener.

May Mark Twain rest in peace, but of the two I would take Andrew Carnegie’s personality, experiences and perceptions over Twains. I found Mr. Carnegie to be balanced and thoughtful, and that he expressed his thoughts without malice—rarely the overriding characteristics of a Twain witticism.
​
My recommendation would be to read the last section of the book first. It is entitled “General Conclusions.” It is a review of his final thoughts at the end of his journey. As a review of the book, I will only publish some excerpts so that the reader can decide if this was a liberating view for an individual to have in the late 1800s.

​My humble opinion is yes!
Excerpts from the Chapter, "General Conclusions"​​
The following is the concluding paragraph to the book.
This Author's Opinion and Perspective
I am thankful for the international company that Thomas J. Watson Sr. founded and reading this book made ever more grateful for the ability to travel as an IBM teacher around the world.

​In all my travels I have enjoyed the company of so many who have cultures and beliefs different from my own. I have found what Andrew Carnegie found … a genuine Brotherhood of Man that I believe will one day be achieved. I will forever write in that belief. Reading this book strengthened my faith.

Thomas J. Watson Sr. always held his company up as an example of what the world could one day achieve. I support and believe in that vision because of the wonderful men and women of IBM I met in my travels around the globe. My thanks to them all.

I hope I display the same.