A Review of Bernard Baruch's "The Public Years" 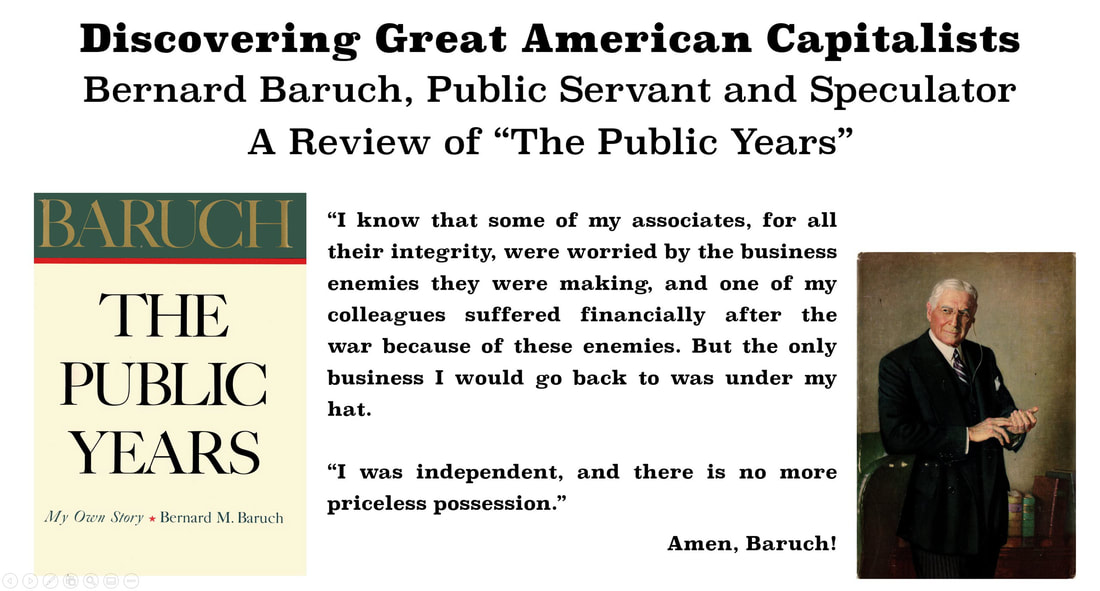 ​​“Democracy is, as Wilson knew, the most difficult form of government. It must be accompanied by self-discipline and the spirit of reason. It cannot be bestowed upon a people; it certainly cannot be imposed upon them. They must win it and deserve it. It cannot even be taken by them and effectively used if they are not sufficiently prepared and mature.

​"This is a  fact which nations newly come to independence and those aspiring to it should remember.”
Bernard Baruch, The Public Years
​A Review of "The Public Years" by Bernard Baruch
Reviews of the Day: 1960
​"The great value of The Public Years does not lie in its revelations of what important people said or did. It is valuable chiefly because it develops a philosophy of service based upon a wise man’s own account of a useful and rewarding life."
​Theodore Long, The Salt Lake Tribune, 1960
Selected Quotes and Insights from "The Public Years"
​​“I have learned in my long life that you can be friends with and admire even the people you disagree with most, if they are honest”
​Bernard M. Baruch
Bernard Baruch: On Woodrow Wilson
“Wilson literally worked himself to the bone, and everybody else to a standstill in Paris. Most of us could find some time for rest and relaxation. I had a place outside Paris where, on weekends, I could catch a few hours of leisure. But the President had no respite. Almost every question—whether it was over the disposition of colonies, the definition of boundaries, or the establishment of the League—was hammered out in frustrating, often bitter debate.
“On more than one occasion it seemed the Conference would break up; once Wilson ordered the George Washington to make ready to take him home. It was not only the sheer physical labor involved in these conferences, discussions, briefings, speeches—the fourteen to sixteen hours a day that he worked—that wore down his never robust health. It was the spiritual travail as well, the emotional frustration of the struggle to fulfill his conception of the peace.
This Author's Thoughts and Perceptions
Having a degree in political science from the University of Texas, I was amazed that this book wasn’t on someone’s mandatory reading list during my last three years at The University—forty plus years ago. In the 70s, it would have been only a decade old. I was offered courses in Marxism, courses in economics, courses in philosophy, history and two-party systems, but nothing was as comprehensive as this single book. It was worth the sum of many of these courses.
​
Bernie Baruch’s perspective was far more informative on these presidents than the professors who sounded off about our presidents but had never worked with them. (Walt Rostow’s economic course, may he rest in peace, was a major exception … it was like sitting at the feet of an economic Plato—who I didn’t need to agree with to enjoy his insights, ideas, and philosophies. … more on that in one of Bernie’s quotes.)

There is very little difference between the “great” man and the “common” man. . . .  The more one approaches great men the more one finds that they are men.

​Of course, Baruch was a man too. He wrote in his first book, My Own Story, that an autobiography should be written early enough to allow the individuals commented on to share their comments back. Fortunately for Mr. Baruch, he was 90 years old at the time of publication of The Public Years. ​I did not find any commentary from those he wrote about in this book.

​After all, he had outlived most of them. On the whole, though, his commentary seemed balanced and it was an easy read.
Letting Bernie speak for himself and to “us” today
​Bernie maintained his independence. He believed that there was no more priceless possession than financial independence so that one could speak freely and honestly. I couldn’t agree more. He loved his “outsider” role, and the impression is that he did not maintain this role to escape responsibility (he was nailed many times by the press and his opponents) but to enforce responsibility on those he advised … an idea his first two quotes convey:
​I will leave this last thought with you as it seems we are in one of those "pendulum swings" in our country today. I hope to be alive when my country swings back to "idealism."

Read the book with an open mind. Surely environments change but human nature evolves. This book was a fascinating complementary read to his first book. I would recommend this book over his first, but that is the political science major in me - revealed.