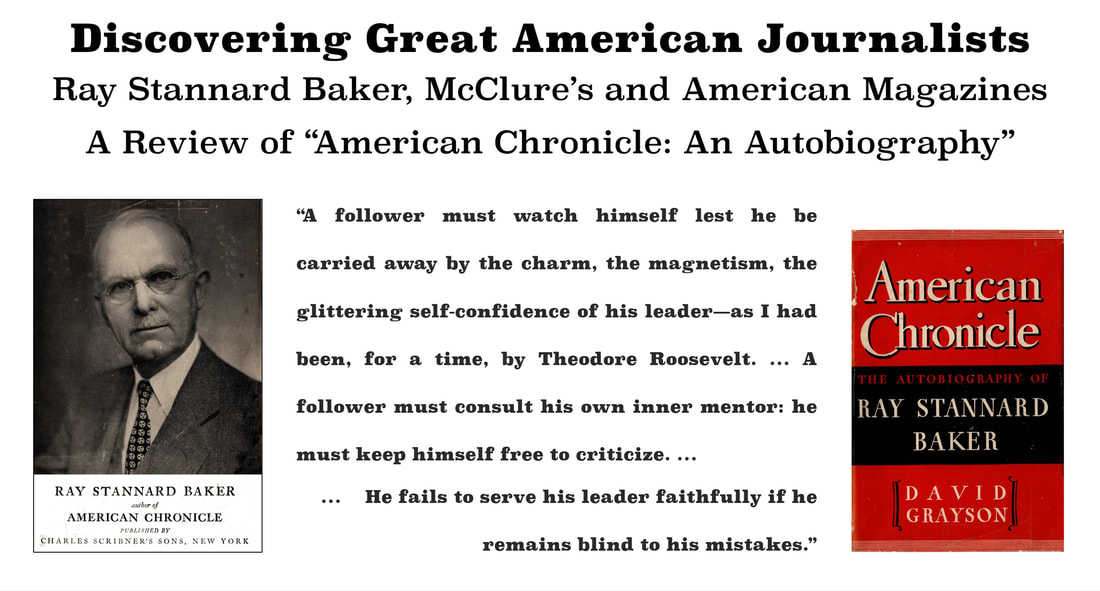 ​​I recommend this book to anyone considering the writing profession. It is truthful, insightful, and wonderfully introspective. Reading about the struggles and questioning thoughts of one of America’s most famous muckrakers, is inspirational and educational.
- Pete
​A Review of Ray Stannard Baker's Autobiography: "American Chronicle"
Reviews of the Day: 1945
"​There were thus many Bakers. … They were always the same idealistic, aspiring person; devoted to the improvement of man’s lot in this veil of tears, always trying to bring to the surface what he felt within him but which he never was able to express entirely to his own satisfaction.”
Robert O. Foote, The Metropolitan Pasadena Star-News, 1945
Insights from "American Chronicle"
This insight was from Woodrow Wilson.
“I had a theory about thinking—that thought was like happiness, not to be had by direct assault. Thought was the by-product of an abundant, various, opulent life. The whole of a man’s nature, not his mind alone, went into it.
​
“Thinking was not a part of life: it was all of life.”

This “thinking” seems very relevant today when social media makes the world seem so “crowded” with other peoples’ opinions:

“What seemed to me then—the supreme problem confronting mankind—was the art of living in a crowded world.”

His description of one of my boyhood authors, Jack London, was deliciously detailed and when they had a heated discussion over socialism this was his observation:

“The difference between us [Jack London and Ray Stannard Baker] lay probably in the fact that he wanted to reform me, and I did not want to reform him. … In later years I have often reflected what a dull, uninteresting, unamusing world this would be if we all believed the same thing: thought the same thoughts.”
​
​Amen, Ray Stannard Baker.
This Author's Thoughts and Perceptions
​I recommend this book to anyone considering the writing profession. It is truthful, insightful, and wonderfully introspective. Reading about the struggles and questioning thoughts of one of America’s most famous muckrakers, is inspirational and educational.

​Consider his thought on writing.
I would agree with the reviews of the day that some of the most powerful chapters are of Mr. Baker’s relationship with Woodrow Wilson. They are intimate tales and a man in power who is fighting for what he believes in and in the end, with the League of Nations, makes compromises he dislikes but knows are necessary to hopefully ensure a better future.
Does the following description of what America needed in its leadership in the national election of 1916 sound familiar?

“What we need, in our leadership, are great mediators, great producers of common understandings—men of deep human sympathies who know both sides and can make each side see and feel the position of the other.

“This type of leader I … think of … in a 'Half-Way House.’ Something like this … not urging men to join political parties or churches, or to cleave to their own nation whether right or wrong but using every energy to produce social understanding and a wider human sympathy.

“There is nothing more needed in the world today; nothing requiring a higher type of leadership.”

Some of the most profound insights are into Woodrow Wilson. In this book he questions the President’s setting of a lofty expectation that was impossible to deliver: freedom for all minority populations in the world.

This passage seems to get this across:

​“They believed that Woodrow Wilson was the Messiah coming to Europe to bring it [freedom] to them. They were prepared to give him—and did give him when he arrived—the greatest and most genuine popular reception ever given any man in modern Italy; but some of us who stood by watching these vast demonstrations of peoples—who were expecting, immediately, the coming of the millennium—began to wonder and to doubt.”

And finally reality set it. Woodrow Wilson couldn’t deliver—no man could have delivered—freedom for all men.

​This was Mr. Baker’s observation:
“As the days passed and the excitement and rejoicing increased, both in Italy and in France there was still more disturbing evidence that the new heaven and the new earth would not prove so easily and swiftly attainable.”
​
It wasn’t. His League of Nations would be attained but failed in the United States and ultimately failed entirely. Baker wrote of the armistice agreement after reading it:

“When I read the first proofs of the Treaty as it was originally drawn, it seemed to me a terrible document; a dispensation of retribution with scarcely a parallel in history.

“Too hard? I thought the German delegation, which had then arrived at Versailles, would fall in a swoon when they saw it. I questioned whether they would sign it. “If they do,” I wrote, “it will be with crossed fingers. I can see no real peace in it.

They have tempered justice with no mercy.”
Woodrow Wilson told Ray Stannard Baker, “If I were a German, I think I should never sign it.”

The seeds of World War II were planted as a result.

This is an amazing read of American history and another reporter’s view of the early 20th Century similar to that of Mark Sullivan’s work Our Times. Mr. Baker brings our history to life. It is a muckraker autobiography on par with Ida M. Tarbell’s All in a Day’s Work. Lincoln Steffens An Autobiography is also reviewed on this site.

Let’s call these three autobiographical reads the "Lives of the Three Mucketeers.”