Who and What Ideas Advanced Early Twentieth-Century Capitalism

Who and What Ideas Advanced Early American Capitalism 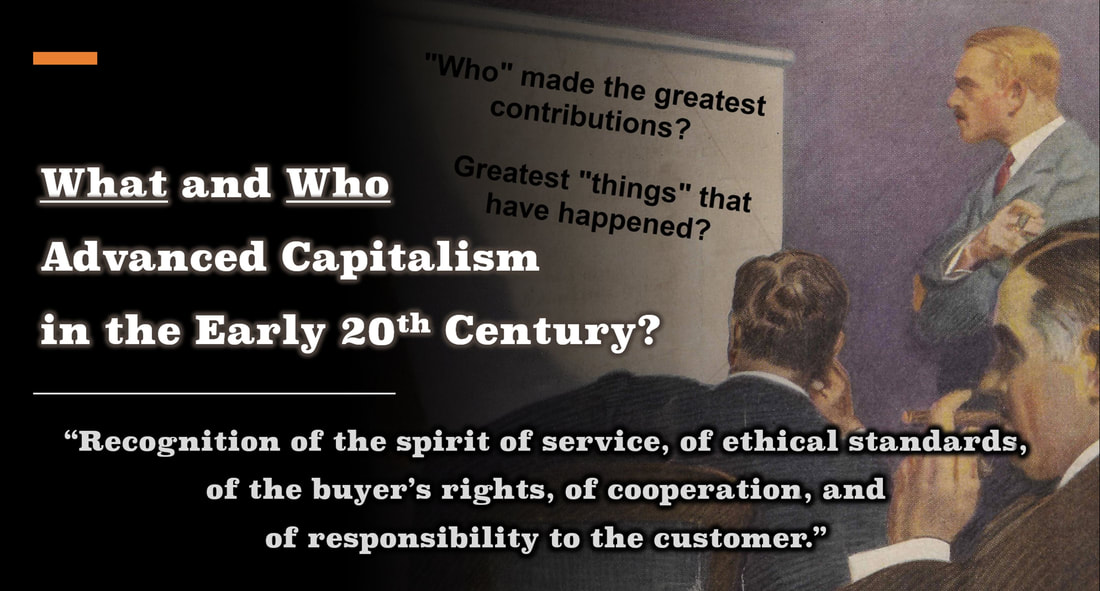 In 1916, Ida M. Tarbell in "New Ideals in Business" wrote the following that supports A. W. Shaw's premise in this wonderful article of his from  "System: The Magazine of Business." In this article Mr. Shaw and his peers looked back on a quarter of a century of change in American Capitalism.

Here is Miss Tarbell's perspective on one change she saw:

“We know fairly well what [the old-school] employer preaches and practices. His concern is with the machinery of business, not with the human beings who operate that machinery. They must look out for themselves. If they contract occupational diseases, it is their lookout. If they are hurt, it is also their lookout. If the hours are long and the wages low, they are free to leave. If they put in suggestions which help the business but not them that is their bad luck. Briefly his creed is ‘Humanity has nothing to do with business.’
​
“The employer of the new school disputes every point of the old creed. Wherever you find this new executive you find him enormously interested in the human material. … We have in the country a new type of management, taking upon its shoulders the burden of industrial unrest, injustice and inefficiency; this school believes that it sees the road out, and that it is willing to give the best of itself in opening the road.”

What and Who Advanced Capitalism in the Early 20th Century?
A History Lesson in Early American Business Leadership
​When I asked an individual close to me what he thought were the greatest positive contributors to business in our country’s early twentieth century, he thought for a moment and then shrugged his shoulders.

​So, I read the following insights of the top industrialists of the day to him.

​He then commented: “You’re kidding, right?”
The following is a sample of what industrialists believed were the greatest evolutionary changes they experienced in the first quarter of the twentieth century: Popular business ideals which improved their companies and solidified our economy:

“We have learned that a single dollar earned with goodwill is more valuable than many dollars earned which bring with them hatred, jealousy and ill feelings, and that any transaction which does not benefit both buyer and seller benefits neither. We have learned to apply the Golden Rule in everyday business relationships, to hold ourselves to a higher standard of business ethics, to recognize the buyer’s rights and the spirit of service—a responsibility to the customer, and to substitute for buyer beware, honest and ethical standards.
​
“Businesses of today [1926] are built on consumer confidence, have more of a spiritual feel—a great spirit of cooperation that has radically changed business methods, and have realized that the greatest service that can be rendered to stockholders is to render maximum service to customers." [See Footnote #1]

A. W. Shaw wrote that this was “the great message” he discovered in this survey from 1926.
​
It is a great message—yesterday and today.
An Inquiry of Early 20th Century American Industrialists by A. W. Shaw
The actual wording of the question was as follows:

“What are the greatest things that have happened to business in the last 25 years?”

It was a specific, yet vague question. It was like asking a person to throw a dart at a dartboard with no central bullseye—there was no single appropriate answer. Instead, A. W. Shaw evaluated how the chief executives’ darts “clustered” around certain topics as they thought more openly, more creatively, more intuitively … and with less direction than if the publisher had given them a well-defined target. Conceptually, this was an open-book, essay test rather than a multiple-choice quiz.
​
Here is the ordered list followed by the editor’s clarifications as he explained his “clustering” of his reader’s responses:
A. W. Shaw printed the answers of his fellow business men to the following question:

​“Who, among businessmen, have made the greatest contributions to the development of business since 1900?”