A Review of "My Friend Mr. Edison" by Henry Ford 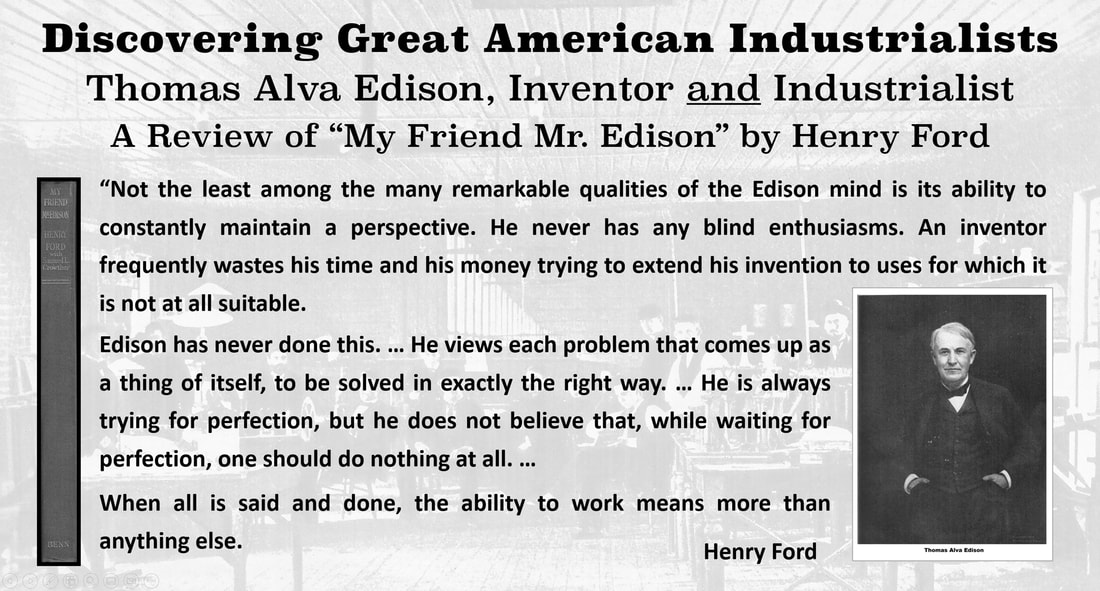 A Review of “My Friend Mr. Edison” by Henry Ford with Samuel Crowther
Reviews of the Day: 1930–31
This book was published in London. I found no reviews in the United States papers (newspapers.com) and only this one from Australia.

“Mr. Ford’s admiration for Mr. Edison is boundless and leads him into exaggeration. …

“Thus, he says that Mr. Edison’s knowledge is ‘so nearly universal’ that he cannot be classified. ‘It is hardly possible to mention any book of major importance on any subject which he has not read.’

“We are given various particulars about his habits.”

The Sydney Morning Herald, 1931
Interesting Insights from “My Friend Mr. Edison”
Writing this work in 1930, Henry Ford contradicting a commonly held belief—written into Dyer and Martin’s 1910 “Edison: His Life and Inventions,” that Mr. Edison was deaf from being “boxed” by a train conductor.
​
Instead, he quotes Edison:
Although the publishers of the Dyer and Martin’s biography claim that Mr. Edison read “every page,” maybe this is another explanation for Thomas A. Edison’s well-publicized hearing loss. Maybe Edison didn’t read the biography so closely because he was more interested in his latest invention rather than an accounting of his life.
​
Just one of life’s trivial mysteries … and common discrepancies between individuals’ life stories.

I also found it very interesting that both Ford and Edison loved "riding the trains."

You can never take the boy out of the man!
His description of Abraham Lincoln is wonderful
"Exactly at half past four the President came out. Since I had seen him at his first inauguration his face had grown sadder but his eye even more kindly. And he had taken on a kind of simple majestic dignity that seemed more of the soul than of person—a dignity and a majesty that one felt rather than saw.

​"No painting, no statue, no attempt at re-creation of him on the stage, has ever given even a suggestion of this surrounding quality, of this atmosphere that came from him and lifted him away from the rut of ordinary mortals."
A. B. Farquhar, The First Million the Hardest
This Author’s Perceptions of “My Friend Mr. Edison”
As I read biographies by some authors, I wonder if they ever really worked as a team under the pressure of quotas, recessions, delivery of bad products, and all the other issues faced not just by inventors but by corporate and sales leaders too.
I won’t say that I never held their outbursts against them, but I understood them, and as I get older, I understand better that we are all different. Diversity isn’t so much about what is on the outside, but about what is on the inside—who we are at our very core—that which we show to our friends: forgiving or hateful, honest or deceiving, spiritual or materialistic, or any number of other contrasting human characteristics wrapped into a single personality.
​
It seems that society has a shallow perception of what it means to be accepting. I believe that through the eyes of Henry Ford, and now mine, Thomas Alva Edison was as portrayed in this book with his closest acquaintances. … and with those that didn’t try to understand him, as impenetrable as Mr. Ford says.

The last chapter includes information on the Edison Museum at Dearborn.

A highly readable book that I enjoyed.