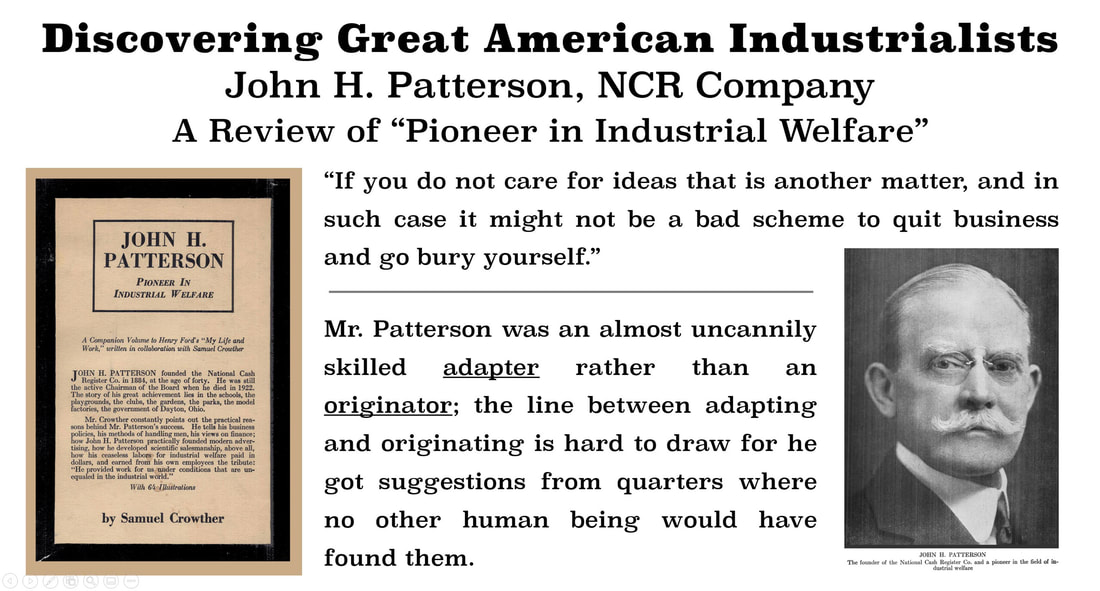 Samuel Crowther does a fabulous job capturing the essence of Mr. Patterson in this book. His skill carries over into his other biographies on a multitude of America's greatest twentieth-century industrialists: Harvey S. Firestone (Men and Rubber: The Story of Business), Henry Ford (My Life and Work, and Today and Tomorrow), and A. B. Farquhar (An Autobiography of A. B. Farquhar).

​My favorite quote of John H. Patterson from this book:

"Of course if you do not care for ideas that is another matter, and in such case it might not be a bad scheme to quit business and go bury yourself."
​A Review of "John H. Patterson: Pioneer in Industrial Welfare" by Samuel Crowther
Reviews of the Day: 1923
"There has just been published an intensely inspiring volume "John H. Patterson: Pioneer in Industrial Welfare." ... America would be a better country for wage-earners and for all of us if more employers were men and of the stamp of John H. Patterson."
B. C. Forbes, The Philadelphia Inquirer, January 24, 1924
Selected Quotes and Insights from "John H. Patterson: Pioneer"
An insight into Patterson's handling of top management.
"When we get to the point where all depends on one man, let's fire him." And that is exactly what he [Patterson] did, and that is one reason why the alumni of the National Cash Register Company have so generally made good, for he hardly ever took the trouble to fire a man who had not sufficient mental force and ability to work himself into a position of central authority. That is the reason he fired Henry Theobald, the president of the Toledo Scale Company; Jacob Oswald, president of the Roto-Speed Company; Colonel E. A. Deeds, Hugh Chalmers; Thomas J. Watson, president of the Computing-Tabulating-Recording Company; and so on through a long list. It will be noted that every one of these men—fired for getting too powerful—to a most unusual degree controlled the companies which they afterward founded or headed!
Inventor vs. Innovator
Mr. Patterson was an almost uncannily skilled adapter rather than an originator; the line between adapting and originating is hard to draw for he got suggestions from quarters where no other human being would have found them and then turned them in such fashion that no one else would have recognized the suggestion.
Stay ahead of your customers
And one of this editor's favorites
"Times have changed but human nature has not."
This Author's Thoughts and Perceptions
This book was released 18 months after the death of John H. Patterson. Samuel Crowther who also wrote biographies on Henry Ford, Harvey S. Firestone, and A. B. Farquhar did an amazing job in this book. It is a superlative work.
NCR had just shipped its first large international export of cash registers to England. The necessary changes were made to transition the machines from counting dollars and cents to tracking pounds and pennies. They were to be an extraordinary overseas testament to the benefits of the cash register: reduce theft and provide business owners with more control over their cash.

​But the registers failed to add properly—a major failing in a high-powered adding machine. Overseas salesclerks were accused of theft and fired. Store owners lost control of their money, and because of poor workmanship, Patterson’s machines came home.

​With his usual flair for the dramatic, he amassed the useless machines in a pile and enclosed them within a locked, glass enclosure as a memorial “for all time.” It was a monument of junk dedicated to preventing another business failure. Then he moved his desk out onto the factory floor so he could see the problems for himself.

He fixed the problems, and it never happened again!